(RNS) — As states issue stay-at-home orders and bar gatherings, some evangelical Christians — those who believe they are a persecuted minority — have become convinced that religious freedom is under attack. The war on Christmas is now the war on Easter.

In a national survey of regular churchgoers released last week, 12% reported that in-person services are still going on at their houses of worship. In some places, physically meeting together is considered an act of faith just when it is needed most. Some have called worship services an “essential service,” and some maintain that prohibiting worship services, even in a pandemic, is a violation of the religious freedom guaranteed by the First Amendment of the Constitution.

One pastor, the Rev. Rodney Howard-Browne, has been charged with unlawful assembly and violation of health emergency rules during the quarantine for holding services at his Florida church: At the time of his arrest, his state had registered more than 5,200 confirmed coronavirus cases and more than 50 deaths.

After his arrest, Howard-Browne’s Revival Ministries issued a 2,500-word manifesto about religious liberty and the First Amendment, quoting the Bible a little and the Constitution a lot.

The Rev. Tony Spell, pastor of Life Tabernacle Church in Louisiana, was also charged with six counts of violating quarantine orders. Spell said in response: “Never been more proud to be persecuted for the faith like my savior.”

A pastor in my home state of Pennsylvania, Jonathan Shuttlesworth, said, “I’m not ashamed that Dr. Rodney got arrested. I’m ashamed that when they wanted to arrest preachers for having church in an entire state there was only one to come for.”

The fired-up Rev. Shuttlesworth then announced that he would host “an outdoor Easter blowout service. Not online. A national gathering. You come from all over. Like Woodstock. And we’re gonna gather and lift up Jesus Christ.”

Keep in mind Pennsylvania has some 5,805 cases of the virus and 74 deaths at last count.

In the combustible kindling of American evangelicalism, this kind of talk could spark a fire. Secular authorities, nonetheless, have piled on. The White House contributed by initially envisioning packed churches — and a “resurrected” economy — by Easter, while other officials conjured up evangelicals’ worst fears by singling out religious groups with threats of fines and worse. New York City Mayor Bill De Blasio said that if churches do not comply with lockdowns, they could be “permanently” closed. Some Christians see in all this an apocalyptic spiritual war in a time when their churches are actually armed. Prior to his arrest, Howard-Browne had made headlines for giving away an AR-15 assault rifle and encouraging his congregants to bring their guns to church. A prominent sign at his church reads: “Please know this is not a gun free zone — we are heavily armed — any attempt will be dealt with deadly force.”

I fully support religious freedom, something we can never take for granted in a time when the president can institute a travel ban on Muslims. As I read Revival Ministries’ statement, much of it resonated with me. Our country has been shaped by civil disobedience, from the Boston Tea Party to the Underground Railroad. “If a law is unjust,” Thomas Jefferson said, “a man is not only right to disobey it, he is obligated to do so.”

And people of faith in particular have a rich history of going to jail for Jesus. The Bible is a subversive book after all, filled with folks who confronted the powers that be. Moses told Pharaoh, “Let my people go.” Shadrach, Meshach and Abednego were thrown into the fiery furnace for defying royal orders. Daniel ignored the orders of King Darius and was tossed into a den of lions.

The early Christians were called “enemies of the state” by the Romans, and many followers of Jesus, accused of “defying Caesar’s decrees,” were jailed and martyred. Jesus himself was executed by the state.

So Christians at their best have always had a precarious relationship with power. I stand in the great tradition of holy troublemakers like Dorothy Day, Martin Luther King, Jr., Daniel Berrigan, Rosa Parks, Franz Jägerstätter, Harriet Tubman, and Sojourner Truth, all of whom broke bad laws.

I’m no stranger to handcuffs myself. I’m proud to say that I lost track of my arrests somewhere after 20. People in my community have gone to jail for defying anti-homeless laws, calling our legislators to take action on gun violence, challenging current immigration policies, standing against the wars in Iraq and Afghanistan, putting our bodies in the way of executions.

We’ve had police officers thank us for what we are doing as they arrested us. Every time we go to jail, as the legend John Lewis used to say, “We smile in our mugshots because we know that we are on the right side of history.”

One of our most effective arguments in court has been that we are simply exercising our religious freedom. We’ve argued that feeding the homeless, providing sanctuary for refugees, and putting water in the desert for immigrants are all essential acts of our faith. And we have won in court, over and over.

I believe in religious freedom, and I’m committed to continuing to defy the policies of this administration that violate my faith.

But the quarantine restrictions are not among them. 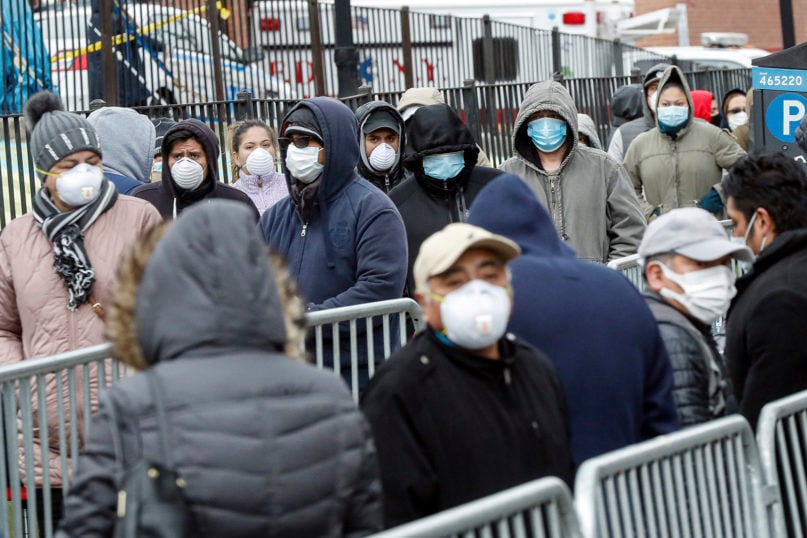 Patients wear face masks as they wait in line for a COVID-19 test at Elmhurst Hospital Center on March 25, 2020, in New York. Gov. (AP Photo/John Minchillo)

What I would say to the pastors going to jail right now for defying the quarantine is this: read Romans 13. This chapter of Paul’s Letter to the Romans begins, “Let everyone be subject to the governing authorities,” and many Christians use this chapter to criticize me when I’ve been arrested for breaking the law. But the role of the governing authorities is to protect people, and in the case of quarantine restrictions, that is exactly what our government is trying to do.

As for the First Amendment, James Madison, the “father of the Constitution,” once said: “Liberty may be endangered by the abuse of liberty.” One person’s freedom can encroach on another person’s right to live.

It is an unfortunate thing that the ban on large gatherings has come during one of the holiest seasons for people of faith. This month Jews celebrate Passover. Christians celebrate Easter. Muslims celebrate Ramadan. So much creativity and innovation will be required to faithfully remember these holy days during the pandemic.

But quarantine rules are not about religious freedom. They are about neighborly love. Right now love requires us to refrain from public gatherings. More important than the First Amendment is the Great Commandment, which calls us to love our neighbors as ourselves.