I got pretty sick last week.

I took to my bed and mostly stayed there: I was coughing, battling an intermittent but lousy headache, and feeling utterly fatigued. There was a burning, tight feeling off and on in my upper chest, and sometimes it was a bit hard to breathe. I slept 10 hours one night, 11 hours another night. I took naps during the day. I felt awful.

And through that experience, there was of course the nagging question: Was this the dreaded Covid-19 virus? What was going to happen to me?

We have a fair number of scientists in my husband’s family, and the long and the short of it is that they helped me uncover a pattern I had missed. It looks like what I have been dealing with — last week, but also during another lousy bout of this illness in March – is an allergic reaction to the mold I have uncovered through my quarantine project of finally going through all of my mother’s boxes that have been in the basement since she passed away. According to my journal, the first time I felt sick with the symptoms was just a day or two after I had opened the first box.

I’m feeling much better now, and it’s a relief to have an answer and an action plan of indefinite non-action: the boxes can wait. But the experience was deeply unsettling—not just the physical symptoms, but the uncertainty of it. The fear.

As a Christian, I believe in all the things: Resurrection. New life. Hope for a triumph over death. And a couple of months ago, I guess I naively thought I was also the kind of Christian who understood that pain, fear and suffering are the price we pay for being human beings in a fallen world. That we don’t get to skip over those parts to get to a more palatable, pastel-greeting-card religion.

Jesus wanted his disciples to be there for the whole journey, including his shameful and scandalous path to the cross, but by the time of the cross, apparently 11 out of 12 of them had gone AWOL. John’s the only disciple who is depicted as actually present at the scene of the crucifixion. The others’ noticeable absence tells me a lot about what kind of Christianity even the best of us are capable of when the chips are down. But where 11/12ths of the disciples opted out of the crucifixion, 11/12ths of them seem to have rallied to celebrate the resurrection, so there’s that. Everybody showed up for that part but Judas.

What I realized last week is that I may know these things intellectually, in the abstract, but it’s another thing to embed them in my bones when they are aching, or in the sinus cavities behind my eyes. Which is humbling. Sometimes I chide my church for being an Easter-only religion that skips over the pain of marking Holy Week so we can focus only on the light and joy of the empty tomb. Anger, sadness, and fear are not emotions that an Easter-only church wants much to do with. Resurrection, yes. Dying and death, no thank you.

It turns out I am much the same. When I rail at my church about this flaw, I am mostly speaking to a vacuum I perceive in myself.

I roused myself on Sunday to teach Relief Society via WebEx. I told the sisters that I was still in my pajamas, which got some chuckles. I told them I felt lousy but was truly glad to be with them, and I posted some conversation prompts in the chat window to get them talking about their lives. Where were they struggling? Where did they see God at work? It was heartening to see them so willing to share both their challenges and their moments of rejoicing. 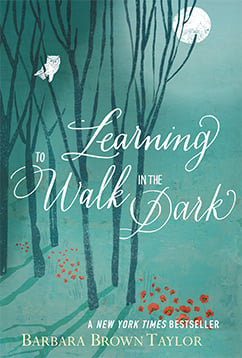 Toward the end, I read a short passage from a book I’ve been revisiting in the past few days, a book that has probably taught me more about life than all the happy and triumphant Easter-only talks I’ve ever heard at church. It’s called Learning to Walk in the Dark by Barbara Brown Taylor, an Episcopal priest and college professor in Georgia.

In the book, Taylor talks about how we all seem to seek “enlightenment” but shy away from the dark, both literally and metaphorically. The word darkness, she says, is “shorthand for anything that scares me—that I want no part of—either because I am sure that I do not have the resources to survive it or because I do not want to find out.” If she had her way, she’d get rid of everything painful from her life and those of the people she loves.

“At least I think I would. The problem is this: when, despite all my best efforts, the lights have gone off in my life . . . plunging me into the kind of darkness that turns my knees to water, nonetheless I have not died. The monsters have not dragged me out of bed and taken me back to their lair . . . Instead, I have learned things in the dark that I could never have learned in the light, things that have saved my life over and over again, so that there is really only one logical conclusion. I need darkness as much as I need light.”

So my question now, as we face more months ahead of uncertainty, illness and fear, is: What should I be listening for in the darkness right now?