(RNS) — George Floyd’s killing was a final straw for thousands of Americans protesting against police brutality and systemic police racism.

Muslim leaders say it may also, at long last, prove to be a tipping point for non-black Muslim communities.

“This has been a rough week, a rough two months for Black Muslims who have been deeply impacted by police brutality and mass incarceration,” said Margari Aziza Hill, co-founder of the Muslim Anti-Racism Collaborative. “We are in mourning, we are tired, we are angry, we are mobilizing.”

On Friday, a wave of mosques will dedicate their Jummah sermons to preaching against anti-black racism and police brutality, following urgent calls from black Muslim leaders to publicly speak up with a “Day of Outrage.” (For most mosques, these sermons and talks will be livestreamed because of coronavirus closures.)

“We expect all allies to publicly condemn police brutality across the U.S. as despicable, harmful, and an injustice that must end immediately,” the group urged. “History is being made, we must not sit on the sidelines.”

Led by Imam Jihad Saafir of inner-city community center Islah LA, a coalition of black Muslim leaders in California has demanded that, in Friday sermons and talks, Islamic organizations address racism and that they also address it in letters of solidarity with black Americans.

It’s the first step in a longer push. The coalition is encouraging non-black Muslims to take five action items — including committing to addressing anti-blackness internally, calling on Minnesota officials for police accountability and joining local efforts to promote racial justice.

And the campaign is catching on, from Georgia to Seattle to Philadelphia.

“This is unprecedented,” said Hill, who was involved in developing the action items. “We are currently getting a flood of expressions of support, and many in the Muslim community are taking to Islah L.A.’s five demands more seriously.” Thousands of people gather at the state Capitol in St. Paul, Minnesota, on June 2, 2020, to protest the death of George Floyd. (AP Photo/Jim Mone)

The Islamic Association of North Texas has been holding a series of livestreamed conversations on race between local Muslim leaders. Its previous Friday sermon focused on racism, as will this week’s.

“Outrage over the murder of George Floyd, and subsequent calls for justice and reform, should not be limited to coming from only African Americans,” the mosque told congregants in a statement. “The onus is on everyone. For those that are not African American but are a minority, there is a responsibility to support your fellow brothers and sisters because you, too, know of the pain.”

In New Jersey, more than 60 groups signed on to a statement agreeing to commit to the action items.

“We stand in love and solidarity with every Black person who was ever excluded, ignored, or made to feel unequal within our Muslim organizations, masjids, Islamic schools, or businesses,” the signatories, more than half of which were mosques, agreed. “We will no longer wait for another death to move us to recognize that Black people have an inalienable right to exist peacefully in this country.”

In the Bay Area, nearly 30 mosques took part in the Day of Outrage. Most, like the Shia Association of the Bay Area, livestreamed sermons. Others participated in a socially distanced “open air” Jummah service in downtown Oakland focused on confronting anti-blackness and police brutality.

The Northern California Islamic Council was one of the first Muslim organizations to publish a statement in “steadfast solidarity” with black Americans.

“We are all connected through the long, painful, and constant historical struggle for justice, fairness and equality for all,” the group, led by Zaytuna College co-founder Hatem Bazian, wrote. “Let’s be clear, State violence against Black Americans has gone on for far too long and without any accountability; the time to end it is NOW and calls for our urgent attention.”

Bazian, who drafted the NCIC statement and will speak at the Oakland Jummah, told RNS his faith is “founded upon a command to uphold justice.” Being Muslim requires working to end every form of racism and discrimination, he said, particularly one that impacts a “sizable segment of our community.”

Black Muslims comprise 20% of America’s Muslim population, with Arabs and South Asians making up the majority of non-black Muslims.

Most non-black U.S. Muslim communities have long advocated for human rights for Palestinians, Kashmiris, Rohingyas and other vulnerable Muslim communities internationally. But the often immigrant-led mosques have been reluctant to publicly align themselves with other causes that have resonance in black Muslim communities, such as bail reform, the imprisonment of Imam Jamil al-Amin and the police killing of Imam Luqman Abdullah.

Instead, many have attempted to rehabilitate Muslims’ image by building positive relationships with local police and elected officials. 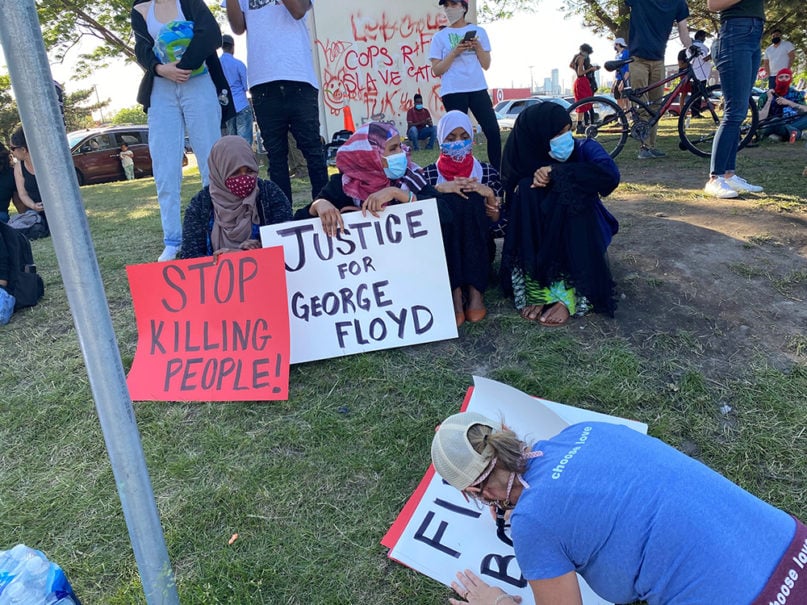 People make and display signs while protesting the death of George Floyd in Minneapolis, Minnesota, Thursday, May 28, 2020. Photo by Doug Pagitt

While that relationship is unlikely to change, leaders say, this week’s statements are still noteworthy.

Hill said mosques’ responses since Floyd’s killing stand in “stark contrast” to the reception to MuslimARC’s 2015 “Call for Justice.” At the time, about 300 groups and individuals signed the open letter MuslimARC wrote in collaboration with Muslims for Ferguson, a coalition of activists that emerged after the 2014 police killing of Michael Brown in Ferguson.

Back in 2016, Bazian’s fellow Zaytuna co-founder Shaykh Hamza Yusuf publicly condemned the Black Lives Matter movement, calling the U.S. “one of the least racist societies in the world,” and dismissed the idea of systematic police racism in favor of addressing “black-on-black crime” and a “breakdown of the black family.”

Such attitudes persist, leaders note. But non-black Muslim communities’ willingness to acknowledge their own anti-blackness and align themselves with movements for racial justice — developments mostly championed by black Muslims and by youth — is a first step.

“Our African American brothers and sisters have been discriminated against and oppressed, and it is our collective responsibility to stand with them and make sure that any discrimination, racism, and prejudice is eliminated,” the Islamic Center of Naperville said in a statement.

“We ourselves affirm that we too are bound by the same standard of justice and equity that we expect others to abide by, for like the American community, the American Muslim community too holds justice as a virtue,” Islamic Society of Boston Cultural Center, which focused last week’s Friday sermon on racism, said.

Dozens of webinars and workshops on allyship with black Muslims have emerged from Islamic organizations, including the Council on American Islamic Relations, the Muslim Political Action Committee, the Islamic Center at New York University and more.

Ethnic-based syllabi and reading groups have also cropped up, including South Asians for Black Lives, Iranians for Black Lives and Arabs for Black Power. And a group of Muslim youth also put together a template for congregants to use to approach their mosque leadership about committing to Islah LA’s action items.

When an Ismaili jamatkhana in Minneapolis issued a message to members advising members to avoid certain areas “due to ongoing unrest, riots and violent protests,” a young member named Alia Jeraj sent an open letter responding: Why had congregants been “told only to stay away from places where fights for justice are being carried out, and not encouraged to find safe ways to participate in the demand for justice?”

More than 600 Ismailis signed on to the letter, which urged the congregation’s leaders to contextualize the violence during the protests and take action to support racial justice.

Still, most Muslim organizations are calling for peaceful and lawful efforts to provoke change.

The national Ahmadiyya Muslim Community condemned Floyd’s killing as part of a “long list of unspeakable cruelties committed against Black Americans” and advocated for non-violent efforts at reform.

The Council of Shia Muslim Scholars in North America condemned the recent killings, saying, “Almighty God has equated the killing of an innocent soul to the killing of all people … We all have a responsibility to stand up against all forms of injustice whether it be fueled by racism or any other evil through peaceful and constructive means.”