(RNS) — In my book “The Next Mormons: How Millennials Are Changing the Church,” I noted that the 2016 Next Mormons Survey found sky-high belief in God among young adults who identified themselves as members of The Church of Jesus Christ of Latter-day Saints, but that other markers of religiosity, like weekly church attendance and adherence to the Word of Wisdom, were low compared to earlier generations.

What’s more, the statistics showed that more young adults were leaving the church — data supported by national studies from Pew (2014, showing 64% retention for all ages of Mormons) and the General Social Survey aggregated through 2016 (which had 57% retention for millennials and Generation X Mormons combined). 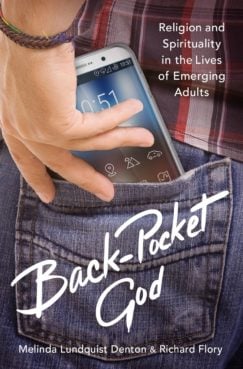 According to “Back-Pocket God,” the LDS retention rate was about six in ten who had stayed Mormon through their 20s. Courtesy image

The excellent new book “Back-Pocket God: Religion and Spirituality in the Lives of Emerging Adults” gives some additional context for this.

Drawing on the National Study of Youth and Religion, a longitudinal study of the same several thousand Americans who were teenagers in 2002-2003 through their 20s a decade later, “Back-Pocket God” says that overall, 61% of people who were LDS during Wave 1 of the study still had that identity by Wave 4 a decade later.

Though the three studies employ different methodologies, they all paint a consistent picture of about 6 in 10 young adults who were raised in the church keeping a Mormon identity as adults.

Note that I didn’t say “staying active in the church.” Those numbers are lower. The 6 in 10 rough estimate is just those people who, on a survey, choose the identity of Latter-day Saint or Mormon as their stated religious affiliation.

One of the helpful aspects of a book like “Back-Pocket God” is that it covers the whole gamut of religious identities and experiences, and when you look at the bigger picture, a retention rate of 6 in 10 is actually quite good. Catholics and evangelicals are keeping about half of their childhood members, according to the NSYR data, and mainline Protestants just a quarter (though they are getting some of the former evangelicals switching in as adults).

This is what I try to explain to Latter-day Saint parents. Sometimes they write to me, brokenhearted that their children aren’t active in the church anymore; sometimes they blame themselves. Where, they want to know, did they go wrong? Did they not hold Family Home Evening often enough? Were they too lax about allowing their kids to attend a state university instead of BYU? Was it because their oldest son didn’t serve a mission?

It’s not that those religious acts and habits are irrelevant for successful religious “transmission.” (Don’t you love how sociologists make the implantation of a religious identity sound like catching a virus?) Family influence is still, hands down, the No. 1 factor in transmitting religious faith in an enduring way. 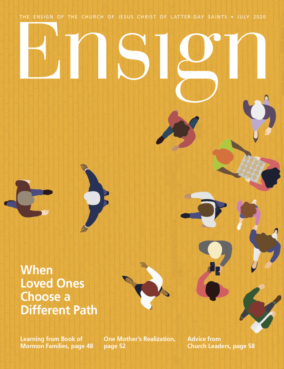 But in our current religious climate, it’s often not enough.

That’s not the fault of parents. It’s not even the fault of the young people who leave, though it may seem like they made this choice all on their own. Human beings are very, very social creatures. Most of us do what the people around us are doing. And right now, the fastest-growing religion in America is “no religion.”

In the July issue of the Ensign, the church’s official magazine, I’m glad to see some attention paid to people who leave the church, and how the people who remain in the fold can most lovingly stay in relationship with them. The whole issue seems centered on the theme of “When Loved Ones Choose a Different Path,” and there’s some good counsel in the articles and personal stories.

One thing that I don’t find helpful, though, is the inclusion of a 5-year-old quote from an LDS apostle who seems to be denying that there is anything like a retention problem in the church:

Some have asserted that more members are leaving the Church today and that there is more doubt and unbelief than in the past. This is simply not true. The Church of Jesus Christ of Latter-day Saints has never been stronger. The number of members removing their names from the records of the Church has always been very small and is significantly less in recent years than in the past. The increase in demonstrably measurable areas, such as endowed members with a current temple recommend, adult full-tithe payers, and those serving missions, has been dramatic. Let me say again, the Church has never been stronger.

This bothers me in a couple of ways. First, it’s just not statistically true, at least in the United States, and it wasn’t even true five years ago.

We know that, not just because of the three nationally representative studies I’ve mentioned here (Pew, GSS, NSYR), but because of the church’s own internal data. In a 2008 meeting of the Brethren — the recording of which was leaked and is now available for viewing — the church’s own meticulous record-keeping showed our young single adults to have an activity rate of 30% in the United States and just 20% internationally. The leaders spoke of declining temple marriages abroad and a few other problems. It’s unrealistic to expect that there has been a major turnaround in the church’s fortunes in the years since 2008 since religious inactivity has become more pronounced in the intervening years, and not just in this country.

“Members leaving” is not about people who remove their names — always a minority — but those who stop attending, drop out or go inactive. Whatever name you give it, that group has been growing. Even if the church’s official membership records don’t reflect it because so few people take the trouble of formally resigning, there’s plenty of evidence that activity is down.

Certainly, more missionaries are serving now (67,000) than in 2008 (52,000), so that part of the “church has never been stronger” line is verifiable. We don’t have access to tithing records or the percentage of members today with a current temple recommend compared to past generations, so it’s possible that those are also strong.

But the church’s membership growth, which is public information, has slowed enough that it is basically flat, though this past year it did slightly reverse the downward trajectory and is back up to about 1.5% growth around the world, and 0.6% growth within the U.S.

Maybe we could make a case for “never been stronger” if we compare today’s church to the debacles that our denominational neighbors are experiencing right now. Many of them would give their right arm for any kind of growth, even 1%.

But when we’re looking at our own recent history, in which 5% or 6% growth was routine, this is nothing to boast about.

Second, this line of “never been stronger” is not very pastoral. Think of those parents. Which is more loving: to admit that yes, the church’s growth has slowed significantly and a lot of people who are technically still on the rolls are not involved at all, which is why we created this whole special issue of the Ensign in the first place, or to make the case that Everything Is Awesome and if there are problems, they are isolated and individual?

One approach helps them to understand that what they’re experiencing with their kids is part of a massive social trend, and not just the result of their personal failings. The other just magnifies their sense of guilt.

RELATED: Worldwide, only 25% of young single Mormons are active in the LDS Church