(RNS) — Norman J. Williams has been in the funeral industry business long enough to remember how the HIV epidemic changed not only the way they cared for bodies, but also for those who lost loved ones to the deadly virus.

There was stigma then, and to some degree, Williams said, that kind of shame still exists today as illness can sometimes be seen as a sign of poverty, bad behavior or misfortune.

“We learned we can do all of those things and still wear gloves and protective garments and still be careful how we treat the deceased, and recognize that how we behave is just as important as what we do,” Williams said.

These principles continue to guide Williams and his staff during the coronavirus pandemic that has claimed tens of thousands of lives in the United States.

Nearly five months since COVID-19 spurred lockdowns and shelter-in-home policies, funeral homes, green burial conservations and houses of faith are continuing to innovate and adjust to a new normal for death care. And they’re doing all of this adjusting while states reevaluate their plans for reopening as the number of coronavirus infections swells in certain areas of the country.

Early on in the pandemic, it wasn’t uncommon to see refrigerated trucks storing dead bodies in New York City as communities struggled with an increasing number of corpses. 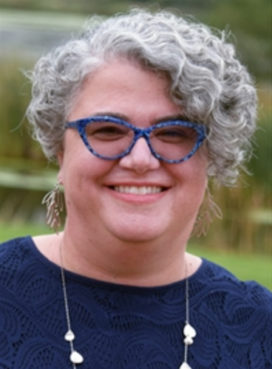 Kemmis said there’s increasing confusion among her members surrounding the different reopening stages in local regions across the country. CANA has about 3,300 members, including funeral homes, cemeteries and crematories.

As states reopen, one funeral home in one county may be allowed to host gatherings with 50% capacity, while a funeral home on another neighboring county could only host at 25% capacity.

For Kemmis, knowing there have been COVID-19 outbreaks at funeral homes and churches has provided clarity on what they can and can’t do.

“Since we know that, everyone is trying to do their best, but it’s hard,” Kemmis said. “Funeral directors, they bend over backwards to give grieving families what they want.”

Kemmis has seen funeral homes hosting drive-thru viewings or visitations, with caskets placed under tents as family and friends drive by slowly, view the deceased and share their condolences at a distance.

In other occasions, funeral homes on cemetery property have put up large movie screens in the parking lot so crowds of people can watch the services from their cars.

Kemmis knows many people would like to hold off on memorial services for loved ones until they can meet again in person, but she believes it’s important to hold some kind of service — even a virtual one — soon after a death. Kemmis’ grandmother recently passed, and, she said, logging on to her memorial was comforting.

Not doing anything, Kemmis said, “is unfortunate because even if we had a Zoom gathering and shared memories, that would be a way to comfort each other.” 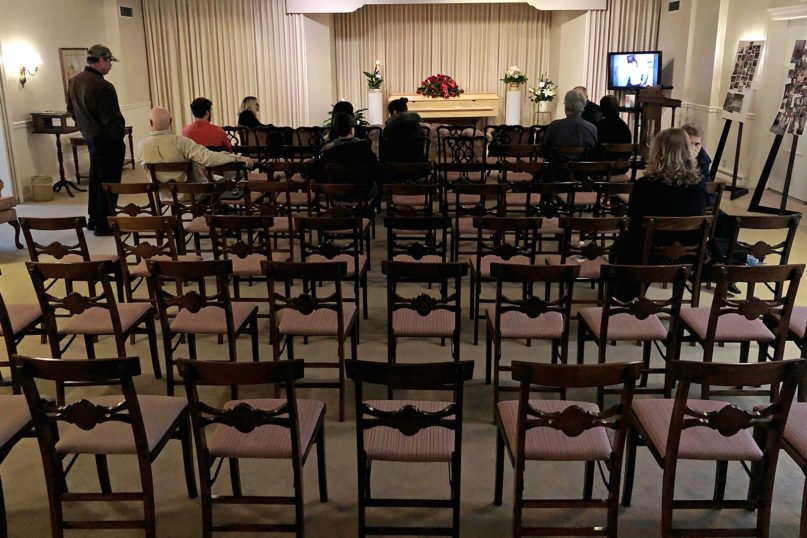 This March 18, 2020, photo shows a funeral that was affected by rules put in place due to the coronavirus outbreak in Milwaukee. Many states restricted gatherings to less than 10 people during the pandemic. (AP Photo/Carrie Antlfinger)

In Nashville, Larkspur Conservation, a nonprofit that conserves land and promotes natural burial, is working to find ways of preserving the “participatory element” of green or natural burials.

Loved ones typically lower the casket or shrouded body into the grave. They also fill the grave themselves, said David Ponoroff, assistant director of Larkspur Conservation.

Ponoroff said before a family buries their loved ones, Larkspur staff identifies who will be participating in the burial. Each person then gets a color-coded shovel that only they will be able to use.

“We’re trying to be creative about the ways that we’re doing the work, to make sure people who come are still able to find the meaningful, beautiful ways they get to be part of burial,” Ponoroff said.

At Unity Funeral Parlors, Williams has seen how modified visitations, or wake services, have still allowed for friends and loved ones to gather to see the deceased in a socially distanced manner. 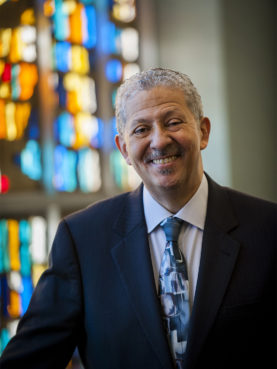 In Illinois, in-person gatherings were at one point limited to 10 people or less.

During visitation services, Williams said people have been able to greet survivors and see the deceased in a come-and-go manner.

“Many people still wanted a traditional service with the body present, for burial or cremation,” Williams said. “They would be able to see the body, confront death, say a word to the survivors, but not stay.”

Williams said this has offered an “opportunity for more than 10 people to participate in honoring a life because they didn’t do it all in one time.”

To make other accommodations, Williams purchased a large TV to help broadcast services on Zoom.

In one Zoom service, 10 people were in the chapel while 50 others participated by reading scripture and offering tributes from their homes.

The funeral home chapel seats 200 people, leaving attendees enough space to socially distance. But, the hardest part, Williams said, “is a natural inclination to want to hug and to comfort and express compassion.”

“That was very difficult to resist, that urge to do that,” he said.

Another issue the industry is grappling with is the high cost of burial services, Williams said. At a time when many people may be out of work due to COVID-19, Williams said more people are choosing cremation because the cost of cemetery space continues to increase.

“It has increased at a rate that has exceeded their ability to save for it or plan for it,” Williams said.

But one thing Williams said remains constant is the need for spiritual companionship, even if from a distance. Clergy, he said, are having to redefine their presence. 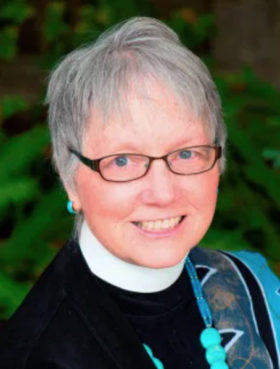 For the Rev. Susan Russell, a priest at All Saints Church in Pasadena, California, navigating death care while adhering to social distancing has gotten a bit easier.

“There is a collective recognition that this is what we have to do right now,” Russell said.

But, she added, “It’s been one of the most challenging places for clergy to be in this time.”

In recent months, the church has lost parishioners to dementia, cancer and other illnesses.

“When it came time for them to pass, they were doing it on their own,” she said.

Ashes of some who have passed remain in a sanctuary space at All Saints, waiting for the time when loved ones can gather for services, Russell said.

While houses of worship in California can reopen for services at 25% of building capacity, or a maximum of 100 attendees, All Saints has not resumed in-person gatherings.

But, Russell said, just because their faithful can’t currently gather in person for rituals with candles, vestments and liturgy, it doesn’t make moments less holy.

Recently, Russell accompanied and prayed over a couple through Zoom after they suffered a miscarriage. While she wasn’t with them in person, “I know it was a holy moment to be present with this couple,” she said.

“As hard as this is, I believe we’re being reminded that the power of God’s love to bind us together is greater than even our most beloved rituals, liturgies and traditions,” Russell said.