(RNS) — Seth Rogen is a very funny actor. He is also a committed Jew — a product of the Jewish community of Vancouver, attending Habonim Dror summer camps. His new movie, “An American Pickle,” about a turn-of-the-20th-century Eastern European immigrant to the U.S. who time-warps to modern day, might be one of the most Jewish cinematic efforts in recent history. Rumor has it that he is a member of a synagogue in Los Angeles.

But, last week, he stepped in it — and it was no joke.

Rogen appeared on Marc Maron’s popular “WTF” podcast, and the topic turned to Israel. Rogen said he was “fed a huge amount of lies about Israel” as a child in Vancouver and that Israel’s organizing principle — grouping Jews together in one state — “doesn’t make sense.”

Let’s take that second piece first. Whether he knew it or not (I am guessing that he didn’t), Rogen was utilizing a sophisticated non-Zionist argument that goes back to the Talmud. One sage says that God did a favor to the Jewish people by scattering them around the nations, so that they could not be sequestered together in one place, and therefore potentially suffer destruction.

Classical Reform Judaism was non-Zionist — for the same reason (and others as well). My Reform ancestors believed passionately in the “mission of Israel,” that Jews must be a “light to the nations.” How can you achieve that goal if you are all in one particular corner of the Middle East?

The late philosopher George Steiner was also non-Zionist. He believed that the role of the Jew was to be a “moral irritant” among the nations, and such a moral role required diaspora. For Steiner, the security of a homeland is a betrayal of Jewish ideals, because the only way the Jews can serve humanity as its moral standard-bearers is through societal estrangement.

Rogen did not know any of this. He was just being funny, or so he thought, and in any case, such over-intellectualizing is quite beside the point. The Holocaust survivor; the Iraqi Jew who lost everything in the 1940s; the Soviet Jew who did nothing more than dream of Zion while in virtual prison in Moscow — try telling them that all the Jews should not be in one place to protect them from destruction. Rogen needed to be just a little bit more humble in the face of Jewish history. 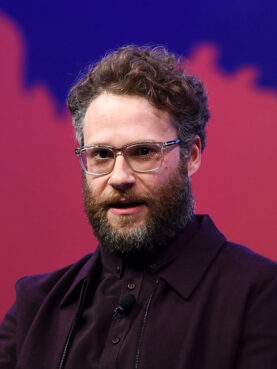 Seth Rogen at Enercare Center in Toronto, Canada, on May 20, 2019. Photo by Stephen McCarthy/Collision via Sportsfile/Creative Commons

Seth knows that he was over the top. According to JTA, Rogen now wants to clear the air about his Israel snark. He was sort of messing around when he said that the state of Israel was a bad idea.

But he does believe that the education he received about Israel, in both formal and informal settings, was severely wanting.

“I was just not given a full picture of the situation and I understand it’s a wildly complex picture to give a child,” he said, adding that he knows Jewish parents who “are taking it on themselves to try to paint a more complete picture of how complex a situation it is.”

I want to give Seth’s observation the attention that it richly deserves.

Because, he is right.

I have been a Jewish educator for 40 years. I plead guilty to Seth’s j’accuse.

I have long struggled to figure out how to present Israel to American Jewish youth, and it is a major challenge.

Part of it is that any educational resources — at least, those that are in print — get dated pretty quickly. Online resources are infinitely better, especially during the COVID-19 era of Jewish education.

Part of it is because our myth-making — the Holocaust as death, the state of Israel as resurrection — lends itself to oversimplification. Whether it’s “draining the swamps,” or the hora, or the Jaffa orange or the start-up nation, the story feels a little flat.

Part of it is because the story of Israel, especially its founding story, is the most controversial story in the world. I suspect that there is no other modern country whose birth narrative is as hotly debated.

Add to this: Most American Jewish kids lack the geographic sense and the historic context to understand Israel. They lack the maturity to understand the nuances, the struggles and the paradoxes.

Here is our American Jewish reality: The overwhelming majority of American Jewish kids finish their Jewish education sometime around puberty. At precisely the time when our kids could actually really begin to understand the history — most kids don’t study world history until 10th grade — those kids are gone.

Throughout my career, I have tried to raise parental consciousness on this issue. I have said that our young people will go to college, maybe have an anti-Israel roommate, as well as professors for whom Hamas is merely the latest incarnation of the Viet Cong their elder colleagues so vigorously cheered on in 1972.

I have said that without a sophisticated way of understanding both the state of Judaism and the Jewish State, their kids will be sitting ducks for the ideology-du-jour. Our kids need to be able to interpret Israel, for themselves and others.

The response? More often than not, Jewish parents are like deer in the headlights. They do not want to deal with this. Many Jewish parents have decided that they, and their kids, will just take their chances.

The parents themselves are woefully uneducated about Israel’s history, and even current events. I have had to explain vocabulary terms such as “settlements,” “occupation” and “West Bank” to Jews with Ph.Ds.

My experiences have, by and large, been with synagogue schools. Do day schools and Jewish summer camps (sigh) do a better job of Israel education? Especially camps — with the steady influx of Israeli staff members who can certainly be resources.

So, I am not worrying about Seth Rogen. He was just playing a bit part as the Wicked Child of the Haggadah. Jewish comedians, like Sarah Silverman and the late Lenny Bruce, are often quite good at that role.