(RNS) — A Kansas pastor is asking for help to find his wife, who reportedly went missing while traveling to seek help for her mental health.

Marilane Carter was last seen Sunday (Aug. 2) in video at a hotel in West Plains, Missouri, according to Overland Park Police Det. Blake Larsen, and her phone last pinged near Memphis, Tennessee.

Her family has not heard from her since, and there has been no activity on her credit card.

The evening before, Carter had left her home in the Kansas City area, where her husband, the Rev. Adam Carter, is pastor of Leawood Baptist Church.

The Rev. Carter tweeted an image with information about his wife’s disappearance Thursday.

“Please help us find my sweet wife. If you see anything please contact law enforcement,” he asked.

Carter was on her way to visit family in Birmingham, Alabama, and had made “concerning statements to her family,” according to the Overland Park Police Department in Kansas. The Carters’ family told Fox 4 Kansas City she may have planned to get counseling at Grandview Medical Center in Birmingham, where she previously had worked as a chaplain. 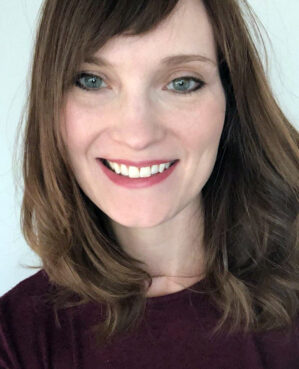 “She just mentioned to multiple family members, including her mom and husband, that she just wanted to find that help that she needed,” her brother-in-law Brady McLaughlin told Fox 4.

It’s possible she chose to find that help along the way, according to a Facebook page titled “Find Marilane” set up to share information about Carter’s disappearance.

Larsen said Overland Police have received reports she may have been seen in Mississippi, Alabama and Tennessee.

Family is caring for the couple’s three young children while the Rev. Carter assists in the search for his wife near Memphis, and Leawood Baptist hosted a socially distant prayer gathering for the family Thursday in its parking lot.

Carter’s disappearance has caught attention on social media, where many are using the hashtag #FindMarilane.

The “Find Marilane” Facebook page posted Thursday that it has “received hundreds of messages and tens of thousands of shares.”

“Your prayers and concern is unmatched and we are beyond grateful,” it said.

Carter is described as a 36-year-old white woman with long brown hair and green eyes, standing 5 foot 8 and weighing about 130 pounds. She was driving a dark gray 2011 GMC Acadia with the Kansas license plate “194LFY.”

Anyone with information about her disappearance is asked to call 911. 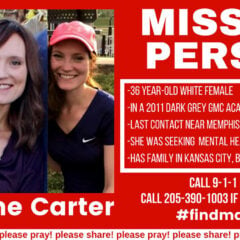 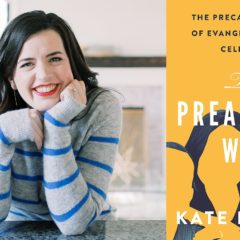 News
Kate Bowler on how evangelical women carved a niche in celebrity culture
Follow us on Facebook!
Submit your photos to RNS