(RNS) — Here is a shocking piece of news from a recent Pew survey of American religiosity during COVID-19. Just 17% of American Jews attended virtual prayer services in the previous month, as opposed to 33% of all Americans and 49% of Christians.

Am I really shocked — as in “Shocked, shocked!” from the movie “Casablanca”?

Nah. Not even a little.

First, let’s be honest. Of all those things that comprise an American Jewish religious identity, the weakest link is, well, how can I put this? Religion.

Or, at least what most people would recognize as religion. During any given week, American Jews are notoriously less likely to attend a religious service than other Americans — and my particular corner of the Jewish community, Reform Jews, is even less likely.

Second, let’s get real. In my career, I have lived through several traumas — Jewish, national and international. On the Shabbat evening after 9/11, our synagogue was close to full. On the Shabbat evening that followed the massacre at Tree of Life Synagogue in Pittsburgh, our synagogue had more worshippers than usual. Other synagogues reported the same phenomenon — so much so that I nicknamed it the “post-Pittsburgh bump.” 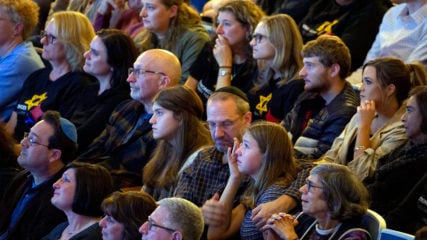 Community members react as they watch a video remembrance for victims of the Tree of Life synagogue attack during a one-year commemoration at Soldiers & Sailors Memorial Hall and Museum, on Oct. 27, 2019, in Pittsburgh. (AP Photo/Rebecca Droke)

But, over time — weeks, actually — in both cases, the bumps receded. Whatever communal piety we felt became dissipated.

Something similar has happened with COVID. True enough — we could in no way fill the sanctuaries of faith in its wake — for several reasons. First, we couldn’t. Second, there is thus far no wake — no “after.”

No, we discovered that there were far more worshippers on our virtual Zoom and Facebook services — well, sort of. We had a lot of virtual worship tourists: people browsing through the internet sanctuaries to see which synagogue had the best production values. (Surprise: The wealthier the synagogue, the bigger the budget, the “better” the service — or so say our Jewish Marco Polos.)

But here is what has happened. As B.B. King sang, more than 50 years ago: “The thrill is gone” — if it was ever there in the first place.

Zoom got old real quickly. We are oysgezoomt.

Right about now, every rabbi and cantor I know is trying to figure out how to jam the spiritual High Holy Day essentials into services of a length that will not overtax the eyes or, may I say, the posterior.

So, when you consider the fact that American Jews have never made worship their strong suit, let us not be surprised that even now — especially now — we lag behind our fellow Americans.

But, but, but: Hold on one second.

Do not make the mistake of imagining that service attendance exhausts Jewish spirituality. Not at all — and here is where you need to know the rest of the story.

So, American Jewish religiosity has never been, and is certainly not now, only worship.

Look at the above statistic.

American Jewish religiosity is not sanctuary-based.

American Jewish religiosity is a sanctuary of deeds — of chesed, lovingkindness, and tzedek, seeking justice.

Let us go one step further.

Twenty percent and 29% really isn’t that great a disparity.

More than this: That 20% of American Jews have read Scripture — fully 1 out of every 5 American Jews — is huge, especially if you interpret “Scripture” broadly and realize that rabbinic literature, Jewish law, mysticism, modern Jewish literature, is also scripture. Want to stretch it a little bit further? Jewish films, music — the purveyors of Jewish culture rose up to meet the challenge.

Here is the good news: Jews are studying Jewish texts — Judaism — in numbers that, a year ago, were simply unimaginable. Adult Jewish educational opportunities crowd the Zoom universe, and we, with time on our hands and eternity in our souls, responded. We are learning like never before.

This is a good thing. This is a very big thing.

I have faith — deep, profound faith — that when this is over — please God, soon! — this will not go away.

I have faith that American Jews, having tasted the sweetness of their letters, will make this the new Jewish normal.