Donate to RNS
Support our work
(RNS) — As hard as it might be to believe this, once upon a time I had even more chutzpah than I have today.
For example, when I was a young rabbi I served as an assistant rabbi in a large synagogue. A board meeting. There is the typical discussion of the synagogue’s financial challenges. Some of our leaders have the perfect solution: Fire several of the custodians.
Done. Finished. On to the next agenda item.
At that moment, I raised my hand, and I asked a question: “What are their names?”
“What are whose names?” someone asked me.
“The custodians. What are their names?”
“How should we know? And, why does it matter?”
“Because,” I said, “if you’re going to fire people, and create havoc in their lives, you should at least know their names.”
Silence. No one knew the names of the soon-to-be-history custodians.
Oh, and did you need to ask?
They were Black.
Which brings me to the most stunning, devastating and frankly addicting book that I have read in many years — “Caste: The Lies That Divide Us,” by Isabel Wilkerson. It is, quite simply, the best book that you will ever read about race in America — or, to be more precise, social caste — that curious and disturbing intersection of race, ethnicity and class.
You are familiar, of course, with the notion of “caste” from your knowledge of the history of India, and the distressing place of the untouchables. Wilkerson expands the notion of caste to include the African American experience and that of Jews in Germany. 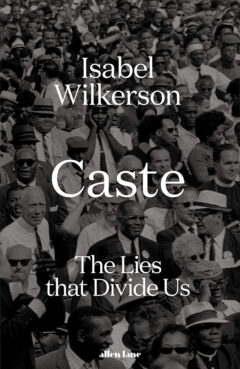 “Caste: The Lies That Divide Us” by Isabel Wilkerson. Courtesy image

“Caste is the granting or withholding of respect, status, honor, attention, privileges, resources, benefit of the doubt, and human kindness to someone on the basis of their perceived rank or standing in the hierarchy,” she writes. “It is the worn grooves of comforting routines and unthinking expectations, patterns of a social order that have been in place for so long that it looks like the natural order of things.”

You know some of this already — or, even, much of it. If you are white and in denial about the function of race and caste in the United States, just ask yourselves: What do you tell your teenager when he or she gets their driving license, and begins to drive?
Then, ask yourself to imagine: What does that conversation sound like in African American homes?
Case closed.
But, the author goes far, far deeper than that, back to John Rolfe, one of America’s earliest settlers, who was perhaps the first to discuss Blacks as merchandise. “The ship brought not anything but 20 and odd Negroes,” Rolfe wrote, “which the Governor and Cape Marchant bought for victualles.”
Wilkerson marks this as the beginning of “the cornerstone of the social, political, and economic system in America,” in which “colonial laws herded European workers and African workers into separate and unequal queues.”

The author shows how the dominant class systematically denied Blacks the right to even a rudimentary education and, using torture methods that the Geneva Convention would have banned, began a campaign of organized violence against Black communities, including the lynchings and mutilations of African American men. Black Americans were systematically denied equal access to housing, professions, health care.

For years, Black Americans did not appear in the census by name. Blacks had to address members of the dominant class as Mr. or Miss — no matter what the age.

Et cetera. A sickening, disheartening, numbing et cetera. For those who quibble about the slogan Black Lives Matter, let me put it to you this way: The reason why Black lives matter is that for centuries, they simply. didn’t. matter. Those lives, those bodies, were fair game for anyone and everyone. Black people were not even persons; in describing a train wreck, for instance, newspapers would report, “two men and two women were killed, and four Negroes.”
What makes “Caste” particularly rich and rewarding is Wilkerson’s extraordinary use of metaphor to describe the American past (and present).
Looking beneath the history of one’s country is like learning that alcoholism or depression runs in one’s family, she says: You don’t ball up in a corner with guilt or shame at these discoveries. In fact, you do the opposite. You educate yourself. Then you take precautions to protect yourself and succeeding generations and work to ensure that these things, whatever they are, don’t happen again.

Another of her metaphors is inheriting an old house. “What is behind this discolored patch of brick? Choose not to look,” she warns, “at your own peril. The owner of an old house knows that whatever you are ignoring will never go away. Whatever is lurking will fester whether you choose to look or not.”

What is new in “Caste”? What didn’t we know?
When Wilkerson turns to German anti-Semitism, here is the devastating truth. America taught Germany how to do it. “Hitler had studied America from afar, both envying and admiring it,” she writes. “He praised the country’s near genocide of Native Americans and the exiling to reservations of those who had survived. He was pleased that the United States had shot down the millions of redskins to a few hundred thousand.”
Hitler especially marveled at America’s “knack for maintaining an air of robust innocence in the wake of mass death.”
And yet, a disquieting irony. The Nazis thought that the United States went too far, in considering as Black anyone with “even a drop of Negro blood in their veins.”
The one-drop rule was too harsh for the Nazis. Just get your mind around that.
I have one quibble about “Caste,” and it has to do with its interpretation of German anti-Semitism.
Both the United States and India built their caste systems on the presumption of Black and untouchable inferiority.
Not so the Germans — nor, in fact, with most versions of anti-Semitism. As Deborah Lipstadt has noted, anti-Semitism has not emerged from the myth of Jewish inferiority. Quite the oppose: It was a phobia about Jewish superiority, control and influence. It was “punching up,” not “punching down.”
Finally, Wilkerson omits the real origins of racism in medieval Spain. As historian Benzion Netanyahu, the current Israeli prime minister’s father, taught: The Spanish ruling class needed to make a distinction between New Christians, who were of Jewish origin, and Old Christians. Thus was born the idea of limpieza de sangre, purity of blood, which ultimately led to the Inquisition and the expulsion.
Few books have touched me as deeply and influenced my ongoing thinking as “Caste.”
That might be high praise for this wonderful, lyrical, profoundly disturbing book.
But, what does it say about me — and perhaps us — that this book is such a wake-up call, such a shofar blast?
Had we not been paying attention?
Share
Tweet
Share
Posted in
ColumnsFaithJudaismMartini JudaismOpinion