(RNS) — Jerry Falwell Jr., the embattled president of Liberty University and one of President Donald Trump’s earliest and most vocal supporters, has resigned from the evangelical Christian university founded by his father.

On Monday (Aug. 24), the first day of the fall semester at Liberty, Religion News Service learned from multiple sources close to the proceedings that Falwell had resigned.

Later that evening, a statement from Liberty confirmed Falwell had agreed to resign as president and from the university’s board of directors, then withdrew his resignation after media reports about it.

Monday evening, however, Falwell told the Wall Street Journal that he had, in fact, sent his letter of resignation to the board.

Falwell already was on an indefinite leave of absence from his roles as president and chancellor of the university following controversial posts on social media.

“Since that time, additional matters came to light that made it clear that it would not be in the best interest of the University for him to return from leave and serve as President,” according to the statement from Liberty.

His resignation came within hours of the publication of a news story that alleged he and his wife, Becki Falwell, had a years-long sexual relationship with a business associate.

Falwell had agreed to to resign immediately after a meeting by the board’s executive committee, according to the statement, but then “instructed his attorneys not to tender the letter for immediate resignation.”

A spokesman for Liberty previously told RNS the board leadership has “been in discussion with Jerry Falwell and expect to be able to make a statement on Tuesday.”

After news of his resignation first broke, Falwell told a Virginia business publication that he did not plan to leave the school. He also claimed his leave from the school was his idea, more of a sabbatical than a leave of absence.

“I don’t care what you call it. I’ve been at this for so many years and under so much stress, I decided I needed a three-month break.”

Falwell had agreed to an indefinite leave earlier this month after posting, then deleting, a provocative Instagram photo of him posing with his arm around a woman at a party with their zippers down and midriffs showing.

After that post, Liberty University alumni and former teaching faculty at the school called for his permanent ouster, citing a long list of offensive statements by Falwell, who has been one of President Trump’s staunchest allies. 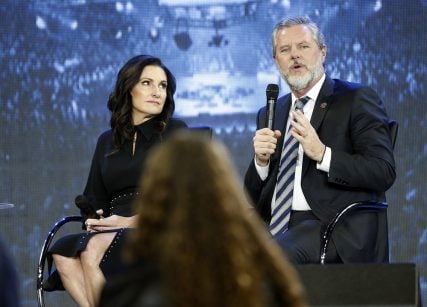 “Becki and I developed an intimate relationship and Jerry enjoyed watching from the corner of the room,” Granda said in the Reuters story.

The Falwells and Granda later became business partners and offered Granda a share in a Miami youth hostel.

Colby Garman, pastor of the Pillar Church in Dumfries, Virginia, and a Liberty alumnus, last week published a letter signed by 50 Liberty alumni calling on Falwell’s permanent removal, saying his behavior has embarrassed the school and its reputation. He reiterated today his call for Falwell’s removal.

Commenting on Twitter, he said that the allegations about the Falwells are sad and, if true, would be “a reminder of just how deeply entangling sin can become.”

Falwell, who since his father’s death in 2007 has been president of Liberty University, one of the nation’s largest Christian schools, has greatly expanded the school and its offerings during his tenure.

Just last week, the board of trustees at the school met and decided to delay any decision about whether Falwell would be reinstated after his leave.

The Reuters story comes one day after the Washington Examiner published a story in which Falwell said he was suffering from depression because his wife had an affair with a family friend and that friend has been threatening to expose it.

“Over the course of the last few months, this person’s behavior has reached a level that we have decided the only way to stop this predatory behavior is to go public,” Falwell said in a statement published by the Examiner.

“We have categorically rejected this person’s demands while dealing with him and this particular member of the media who seemed just as obsessed with the prurient, untrue aspects of this story, however fantastic.”

Falwell did not name the friend in the Examiner story. He also said he was “not involved” in his wife and Granda’s affair.

Reached by phone earlier Monday, Falwell told RNS he already had given his statement to the Washington Examiner and wouldn’t comment further.

Those who study U.S. evangelicals said that while churches and other institutions may look the other way when it comes to race, money or politics, sexual sins are not tolerated within that subculture. Many Christian schools, such as Liberty University, have honor codes that spell out what they consider to be Christian standards for sexual conduct.

“I don’t see how Falwell survives this,” John Fea, a professor of American history at Messiah University and a frequent commentator on evangelicalism, said before news of Falwell’s resignation broke. “He’s done.”

A group of students and alumni blamed the crisis in leadership on the school’s board, saying it had been “derelict” in its duties in allowing Falwell to damage the spiritual vitality, academic quality and national reputation of the school. The group, called “Save71,” suggested the school begin by removing the “beneficiaries of Falwell’s inappropriate nepotism.” It also proposed an independent investigation of claims of financial corruption.

Falwell also made headlines when photos of Falwell and members of his family partying at a Miami Beach nightclub in 2014 surfaced.

More recently, he apologized after tweeting images of a politician in blackface and Ku Klux Klan imagery.

(This story has been updated with additional statements from Falwell and Liberty.)