(RNS) — Everything the late Ruth Bader Ginsburg did, and everything she was — was Jewish.

“I am a judge born, raised, and proud of being a Jew. The demand for justice runs through the entirety of the Jewish tradition. I hope, in my years on the bench of the Supreme Court of the United States, I will have the strength and the courage to remain constant in the service of that demand.”

Others have, and will continue, to praise her manifold contributions to American law and society.

Others have, and will continue, to analyze how she became the most unlikely popular culture heroine in our history — the notorious RBG.

Others have, and will continue, to wonder aloud: How will American democracy now recover? How will we, as a nation, stare down the ultimate cynical, hypocritical move of those Republicans who will ignore their own precedent in 2016 — and their own words — to try to rush through her replacement in the waning days of a presidential term?

All true. All valid.

But, as a rabbi, what do I bring to my eulogy for her? Besides the fact that she died, just as the old year was itself dying and a new year being born — a truly propitious sign? 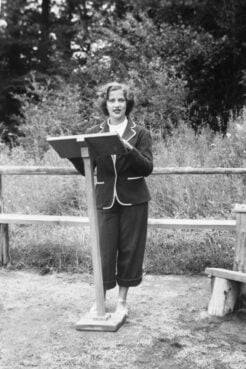 I want to go back to something that happened in her teen years.

It was during those years that she attended the summer camp Che-Na-Wah. It was founded in 1923 and owned by the Wortman family for more than 60 years; located in Minerva, New York, in the Adirondacks and is the sister camp to Camp Baco for boys.

First of all: Can someone please explain to me how the American Indian names came to be a fetish in the summer camp industry? (Are there American Indian kids who go to Camp Yerushalayim? Just asking.)

Second: Justice Ginsburg’s obituaries refer to the camp as a “Jewish camp.”

So, let’s talk about “Jewish camp.”

I, my brother and my sons are all products of Reform Jewish camping — more than a half century of loyalty to the URJ Camp Eisner in Great Barrington, Massachusetts.

The URJ camps — run by the Reform movement, like the Conservative Ramah system, various Zionist and Israel-oriented summer camps, JCC camps, Federation camps, Y camps — are, in fact, “Jewish camps.” Which is to say: Along with everything else, and at their very core, they teach Judaism. The Foundation for Jewish Camp invests significant funds in those camps, and that activism has raised the Jewish profile and programming of those camps.

There are many summer camps that are owned by Jews, where, perhaps, there is some observance of Shabbat (candles on Friday evenings, say) — and wherein the vast majority of the campers are Jewish. This should not surprise us; summer camp is a very “Jewish” thing to do in the United States.

But, while those camps might be “Jewish,” it might be more accurate to say that they are “Jew-ish.” The clientele is mostly Jewish, but Judaism is not part of their mission.

This might be a distinction without a difference — certainly in the story that we now tell about young Ruth Bader.

In 1948, at the age of fifteen years old, Ruth served as the “Camp Rabbi” at Che-Ne-Wah, which was owned by her uncle, Sol Amster, and his wife, Cecilia.

The photo shows her giving the sermon.

Just wrap your head around that.

How many other young Jewish women were giving sermons in 1948?

The answer: more than you think, and more than we might ever know.

Which means: Every Jewish woman who has ever given a sermon brings within her voice an echo of Ruth’s.

Which also means: Long before she ever dreamed that she would be speaking in her role as a Supreme Court justice, young Ruth Bader was learning how to speak publicly.

As a Jewish educator, I must lift up this experience in Ruth Bader Ginsburg’s life.

The reasons are apparent. Kids are away from home. They learn new things about the world and about themselves. They find adult role models, who are perhaps only a decade or so older than they. For me, it was the “camp rabbis.” They inspired me to follow their example.

Summer camp becomes a kid’s time to shine. It happened to me and my closest friends — and to my sons. In our family, we used to joke that being a color war general was a wonderful college resume item.

I write these words, not only in solemn memory of one of American Judaism’s most distinguished figures — but also as a strengthening of faith — for kids, parents, camp alumni and staff members. This past summer was a dismal summer for many camps, Jewish camps included — and especially, those religious movement camps that teach Judaism.

Who knows? There might be a future Ruth Bader Ginsburg out there — who is, even now, dreaming of packing her duffel bag next summer.