(RNS — We shouldn’t be surprised that an election that has come to be about race and culture is also the first in which the sitting president refuses to agree to a peaceful transfer of power. Both of us — a white Christian and a Black Christian, both evangelicals — have been noticing how differently white people and Black people, even those on the same side of the political aisle, are talking about what we are up against.

Liberal and moderate whites are concerned about their core issues in this election, their deeply held convictions and commitments. Black Christians and especially Black parents are talking in more absolute terms: “This is a life and death election,” they say. When those Black voters explain what they mean, they say they believe that the lives and safety and future of their children are literally at stake in the November results.

With the increasing and overt rhetoric of white racial grievance, of fear, hate and, yes, the language of violence in this political campaign, Black people fear what lies ahead for their families. Divisive racial rhetoric is part of the election coverage on the nightly news. They hear it in campaign rallies and likely will hear it in the upcoming debates.

Racism, in short, is on the ballot this year — or rather, the idea of a genuinely multi-racial democracy. Some Americans view that prospect as a great hope; others view it with great fear.

Black parents can see the divide in how their neighbors respond to talk about changing our public policy to fight systemic racism in rhetoric supporting either “racial reckoning,” or “law and order” (the latter expressed in the militarized response to mostly peaceful protests and armed white self-described militiamen in the streets). When one side stokes the fear of “low-income housing” coming in to destroy the suburbs, the racial code language is unmistakably clear.

Given what’s at stake, influential Black clergy and their allies are calling for more than better political strategy. They are calling on Americans to fast and pray for the next 40 days before this election. There are demons in the air, our nation’s worst racial demons, and, as Jesus says in the Gospel of Mark, “this kind can come out by nothing but prayer and fasting.”

A letter signed by 45 Black and white clergy and posted on Change.org noted that prayer and fasting have “the power to move heaven and earth.”

The letter continues, “We are just weeks away from one of the most consequential elections that America has had — one that will determine the kind of nation we will be. …  There is so much at stake for our communities in this election that we want to bombard heaven with our petitions, trusting and believing that God will hear our cries and answer our call for justice, mercy and a fair and safe election.”

In the voter protection conversations we are together having with Black clergy and white allies in key states, as well as with their election officials, we are talking about “spiritual warfare” and the weapons needed for battling evil spirits and ugly demons trying to retake our land. Because we “wrestle not against flesh and blood,” as the apostle Paul says, but against “principalities and powers, and evil in high places.”

Our votes are our “weapons of spiritual warfare to protect the most vulnerable voters from aggressive tactics aimed deliberately and directly at suppressing minority voters — which is nothing less than an assault on that image of God — an attempt to throw away imago dei.

There is a powerful tradition in Black Church worship and praise for people to respond with “I agree!” — words of affirmation and commitment that are uttered in relationship to God. It’s time for white Christians to respond to Black Christians in this call for fasting and prayer to deepen our response to the fundamental moral and biblical crisis of this election with “I agree!” White silence is not possible in the face of this attack on fellow believers of color. It is time for all of us to Stand, Fast, Pray and Act.

A 40-day fast and prayer can take us all to a deeper level than politics. These spiritual disciplines must undergird all of our work for these next six weeks.

(The Rev. Jim Wallis, the founder of Sojourners, is the author, most recently, of “Christ in Crisis: Why We Need to Reclaim Jesus,” which is available in paperback now. He is on Twitter @JimWallis. Dr. Barbara Williams-Skinner is president of Skinner Leadership Institute and co-convener of National African American Clergy Network. Her book is “I Prayed, Now What?“ The views expressed in this commentary do not necessarily reflect those of Religion News Service.) 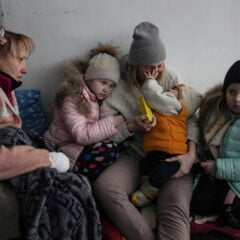