LOS ANGELES (RNS) — A new survey focusing on Latino Christian voters found that former Vice President Joe Biden has a voting advantage over President Donald Trump. Even so, Trump’s support among the group has grown significantly since 2016.

It found that 62% of registered Latino Christian voters said they would vote for Biden, compared to the 30% who would vote for Trump, according to the Claremont McKenna College’s Latino Religions and Politics National Survey, which was released Wednesday.

The bilingual survey, which polled 1,292 Latino Christian voters between Sept. 8-22, is described as the largest Latino religion and politics survey this election season. It exclusively focused on registered voters and Latino Catholics, Protestants and evangelicals.

Espinosa said they focused on Latino Christians because they “make up the vast majority of Latinos who are religious.” Exploring the role of religion in politics is crucial given that nearly 70% of the surveyed Latino Christians said religious guidance is important in their daily lives, he said. 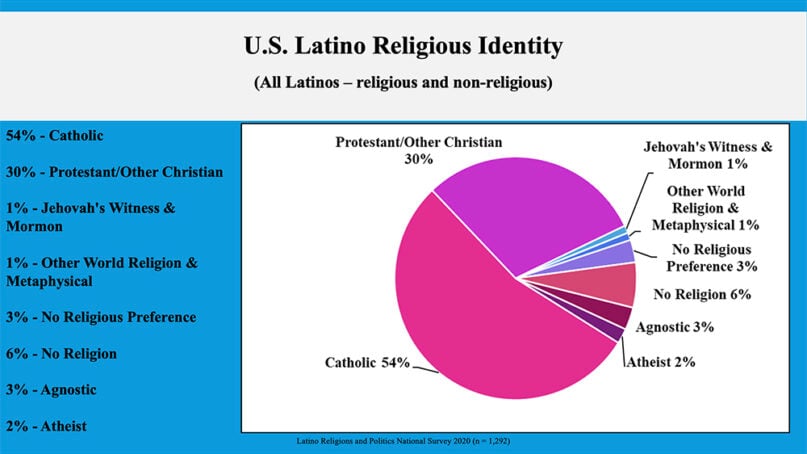 Meanwhile, Trump’s favorability among Latino Christian voters has improved from 15% in 2016 to 32% in 2020. He’s also doing better in Florida, with 41% of Latinos Christian voters supporting him compared to 35% in 2016.

Faith and Latinos are expected to play key roles in states like Florida, where there are more than two million registered Latino voters. 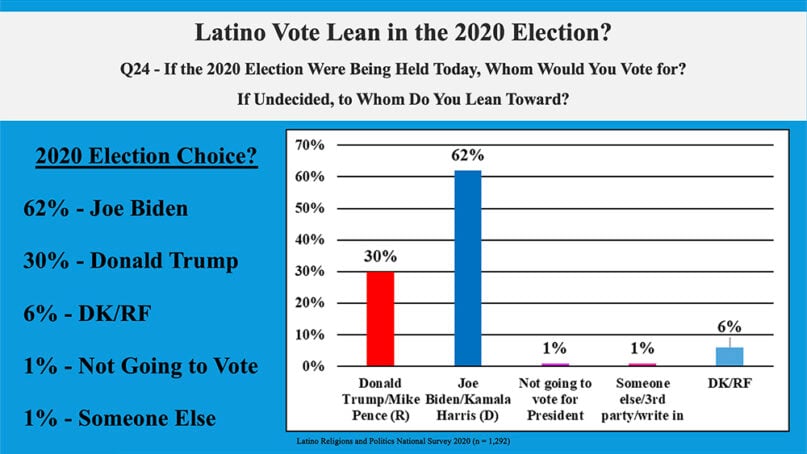 “Latino Vote Lean in the 2020 Election?” Courtesy of the Latino Religions and Politics National Survey

Although Biden has led Trump in swing states, Espinosa said a high percentage of undecided voters in these same states are Latino born-again Protestant evangelical Christians — a large group in which Trump is slightly leading Biden nationwide (48% to 46%).

Latino voters in swing states like Florida are not only key for Biden, but could also alter the presidential election, Espinosa said.

Espinosa said the nation’s growing Latino Protestants and other Christians are much more likely than Catholics to possibly vote Republican. (The survey’s ‘other Christians’ label refers to Christians from smaller Protestant denominations or who attend independent and non-denominational churches that are evangelical, Pentecostal or charismatic.)

This, Espinosa said, could “have a real impact on the election, because many are undecided and have a history of swinging over and voting Republican.”

According to the survey’s report, 46% of Latino undecided voters are born-again Christians.

Among Latinos across the nation, Catholics have declined to 54% and Protestants and other Christians have grown to 30%, the survey found.