(RNS) — A day after a Jehovah’s Witness became the first to be acquitted in Russia since a 2017 ruling declared his faith group “extremist,” six Russian members received suspended sentences for gathering for worship.

The developments come a week after dozens of scholars from across the globe called on Russian President Vladimir Putin to end persecution of Jehovah’s Witnesses.

The pacifist faith organization said six men and women were given suspended sentences ranging from 2 ½ to four years; in addition, they were given orders of “restricted freedom” from seven to 10 months in a court in the western city of Ulyanovsk. Freedom restrictions can include limitations on where they can travel and with whom they can associate.

“We are pleased that they were not imprisoned, yet it remains a gross injustice for them to be convicted simply for their peaceful Christian worship,” said Jarrod Lopes, spokesman for the Jehovah’s Witnesses, in a Thursday (Oct. 8) statement.

“We hope that Russia will stop vilifying Jehovah’s Witnesses with the preposterous label of ‘extremists’ so they can once again worship freely and contribute fully to the communities they love.”

Lopes also praised the decision made the previous day by a judge more than 900 miles away.

“Yesterday, in Kabardino-Balkarian Republic, Judge (Elena) Kudryavtseva courageously issued the first ‘not guilty’ verdict on one of Jehovah’s Witnesses since the 2017 Supreme Court ruling,” Lopes said. “Today’s judge, Galina Soshkina, instead aligned herself with those who have facilitated the persecution of Jehovah’s Witnesses, flouting the censure of the international human rights community.” 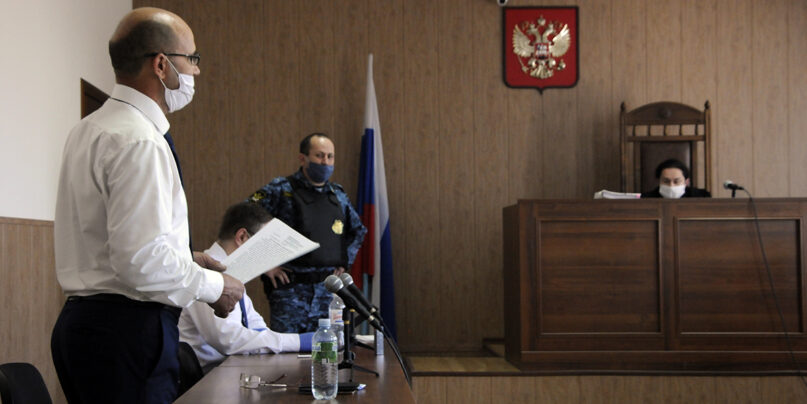 Lopes said the prosecution, which has 10 days to appeal, had requested a two-year prison sentence for Yuriy Zalipayev. But the judge in the Kabardino-Balkarian Republic found Zalipayev not guilty.

RELATED: Who are Jehovah’s Witnesses?

Zalipayev was charged with inciting others to violence but more than 30 people testified he instead encouraged Bible reading and kindness. The Jehovah’s Witnesses organization said the ruling was based in part on a U.N. working group finding that the denomination’s publications and services do not include calls for violence.

Some of the six who received suspended sentences spent weeks in pretrial detention or under house arrest. Some also had their bank accounts frozen, Lopes said.

“As institutions and individuals concerned with religious freedom, we have followed the events in Russia with increasing alarm,” the CESNUR statement reads.

The Jehovah’s Witnesses report that more than 1,100 homes have been raided since the 2017 ruling by Russia’s Supreme Court and more than 380 people have been charged under the article of the Russian Criminal Code about extremist crimes.

The U.S. Commission on International Religious Freedom held a virtual hearing in September on religious liberty in Russia and Central Asia. Several participants, including Emily B. Baran, a history professor at Middle Tennessee State University, cited persecution of Jehovah’s Witnesses in Russia.

“Russia cannot be said to have full religious freedom, a cornerstone of a democratic society, as long as Jehovah’s Witnesses cannot practice their faith within its borders,” she said in written testimony.