(RNS) — As we wait now to see how a Biden administration takes shape, we should review what we learned from this election.

Democrats feel about pollsters the way Charlie Brown regarded the constant betrayals of Lucy, who kept pulling the football away just as he tried to kick it. It happened in 2016 and again this year.

Because of the polls, Democrats began election night thinking they had a chance for a major sweep of the presidential map, with sure wins in North Carolina, Arizona, Florida, Pennsylvania and Wisconsin. Biden did win enough of those races to gain the presidency, but the margins were razor thin.

Democrats were also told that they would win the Senate. At this point, that looks very unlikely.

In their defense, pollsters will say that most of the results are within the “margin of error” or just a little outside it. But why did the errors all go in one direction — in favor of the Republicans? If the errors were truly random, some of the errors should have had Democrats outperforming the polls.

Pollsters also claim that people changed their minds at the last minute. I do not buy it. The polling numbers were consistent for months. There was no October surprise that would explain sudden movement at the last moment. Something was wrong with the polls.

Pollsters and media elites have continually underestimated Trump. Even though he lost, Trump did much better than the elites thought he would.

Before Election Day, the media focused on the enthusiasm of Democratic voters who were turning out in numbers higher than 2016. What they seemingly failed to see was a corresponding increase in enthusiasm for Trump that brought out additional voters for him. Republican and Democratic voter increases almost cancelled out each other.

It is noteworthy that in the 2018 election, the polls were more accurate when Trump was not on the ballot. That leads me to believe the 2020 polls failed because they underestimated the Trump effect.

Now that he has been defeated, liberal elites expect Trump to fade away. Really? 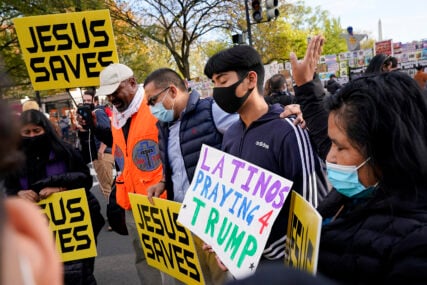 Demonstrators pray outside the White House on Nov. 3, 2020, in Washington. (AP Photo/Jacquelyn Martin)

3. Hispanics are not monolithic.

Democrats are continually disappointed that they do not get more of the Hispanic vote, especially after Trump’s anti-immigrant policies. But those who look more closely at Hispanics note that they are not single-issue voters. True, Mexican Americans were key to Biden’s victory in Arizona, but Cubans helped Trump take Florida.

Hispanics who have been in the U.S. for generations are less Democratic than recent immigrants who have undocumented family members. “We came legally,” their logic goes, “why can’t they?”

Hispanics who have small businesses also vote for Republicans more than those who are earning minimum wage. And evangelical Hispanics vote more Republican than Catholic Hispanics.

A political strategy that treats all Hispanics alike is bound to fail.

4. Urban elites and rural America do not understand each other.

Political, cultural and media elites do not understand rural America. At worst, they treat them with contempt as hillbilly racists. When a factory closes, they do not understand why workers cannot retrain themselves or move to a place where jobs are available.

Middle America resents this elitist assessment. For them, small-town values are what is great about America, and they see the Eastern elites as tearing America down. They believe in an America as portrayed by the Hallmark Channel, which Eastern elites consider lowbrow.

About half the movies on the Hallmark Channel seem to show an arrogant professional type forced by circumstances to move unwillingly from a big city to a small town. Here, the professional undergoes a conversion through contact with the good people of the town, and of course, falls in love and stays.

The alternative scenario is a small-town girl goes to the big city where she conquers the world with her small-town values.

This division between rural areas and cities has existed for millennia. The American political system, which gives outsized power in the U.S. Senate to rural states, makes ignoring the values and needs of middle America a recipe for defeat.

Biden may have won the presidency, but a Republican Senate will be able to stop him from enacting his legislative agenda. Mitch McConnell has proven to be a skilled and powerful foe to Democratic administrations. There may be agreement on an infrastructure bill, but time is running out for responding to global warming. Ironically, Florida, which will suffer most from rising seas, went for the climate denier.

The Green New Deal will have to be adjusted to make it more financially attractive to rural America, otherwise it has no possibility of enactment.

America is divided — rural against urban, Republican against Democrat, conservative against liberal, white against Black. The level of animosity is high. Somehow, we must stop shouting and enter a more respectful conversation with one another. We must do more listening and less preaching. If we cannot, our future is bleak.