(RNS) — One of the most important stories coming out of the 2020 presidential election is that the United States will soon swear in its first female vice president.

Vice President-elect Kamala Harris noted this in her victory speech on Nov. 7, when she said, “But while I may be the first woman in this office, I won’t be the last. Because every little girl watching tonight sees that this is a country of possibilities.”

While women are changing the world of electoral politics, however, their progress in the world of religion is downright glacial. 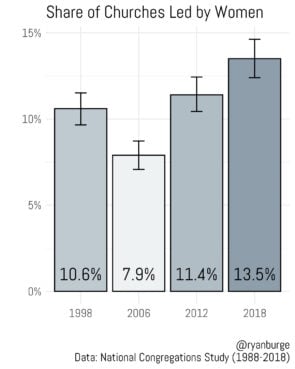 “Share of Churches Led by Women” Graphic by Ryan Burge

The National Congregations Study, hosted by the Association of Religion Data Archives, is one of the most valuable tools for sociologists of religion because the survey measures not individuals but congregations. First commissioned in 1998, the data gives researchers the ability to track the change in the life of the average church community over the last two decades.

The study also captures well just how bleak the picture is for women moving into leadership roles in Christian churches.

In 1998, 1 in 10 Christian churches in the survey indicated that a woman was the pastor or otherwise led their congregation. Eight years later, that had dropped to just 8% percent. In 2012, that rose to 11% and six years years later was at 13.5%.

Comparing gender equity in the pulpit versus the halls of Congress brings this lag into sharper contrast. In 1998, 4.6% of members of Congress were women; that share quadrupled to 23.5% in 2020. For women in the pastorate, there’s been essentially no change.

Adding race to the equation paints a more nuanced picture of Christian leadership in the United States.

“Race and Gender of Pastoral Leadership” Graphic by Ryan Burge

And, the data clearly indicates that when women are called to lead a congregation, those churches are often smaller than those led by their male counterparts.

In 2006, the average church led by a woman had 114 worshippers, less than half the size of churches led by men. In subsequent waves of the National Congregations Study, that gap only widens. In 2018, male-led congregations were nearly three times the size of those led by women. These results are no different than those uncovered by a group of scholars in 1998 when they concluded that women who lead churches are often tasked with leading smaller, poorer and more rural congregations, while being compensated less for their efforts.

If there’s any positive data about women church leaders, it’s the fact that other scholarship has indicated that support for women preaching from the pulpit is incredibly robust among evangelical survey respondents.

While the fight for gender equality has led to tremendous successes in just the last few years in a variety of facets of American society, capped by the election of Kamala Harris, the stained-glass ceiling is just as thick and impenetrable as it was two decades ago.

As evangelicals struggle to retain the younger generation, who overwhelmingly favor female pastors, one must wonder when the occupants of pulpits will more accurately represent the occupants of the pews.

Donate Now!
Posted in
Ahead of the TrendChristianityFaithOpinionPoliticsU.S.
Follow us on Facebook!
Submit your photos to RNS