LOS ANGELES (RNS) — Eder Díaz Santillan vividly remembers a massive mural inside the Catholic church where he worshipped as a child in Mexico. The painting depicted nude and rich people, symbolizing money, sex and power, all vices he learned could lead one to hell. Amid flames, they reached out to God for salvation.

The only thing missing in the painting, Santillan thought, was an image of himself.

“It was very instilled in me that I was a sin, that I was going to hell,” said Santillan, 35, who is gay.

Growing up, Santillan never thought he’d feel at peace with his LGBTQ identity, let alone be able to tell his family and friends. This makes it all the more remarkable that today Santillan — who has worked as a radio producer and talent in the Los Angeles area — hosts a Spanish-language podcast, “De Pueblo, Católico & Gay,” where he openly discusses his identity as a Latino and gay Catholic man. 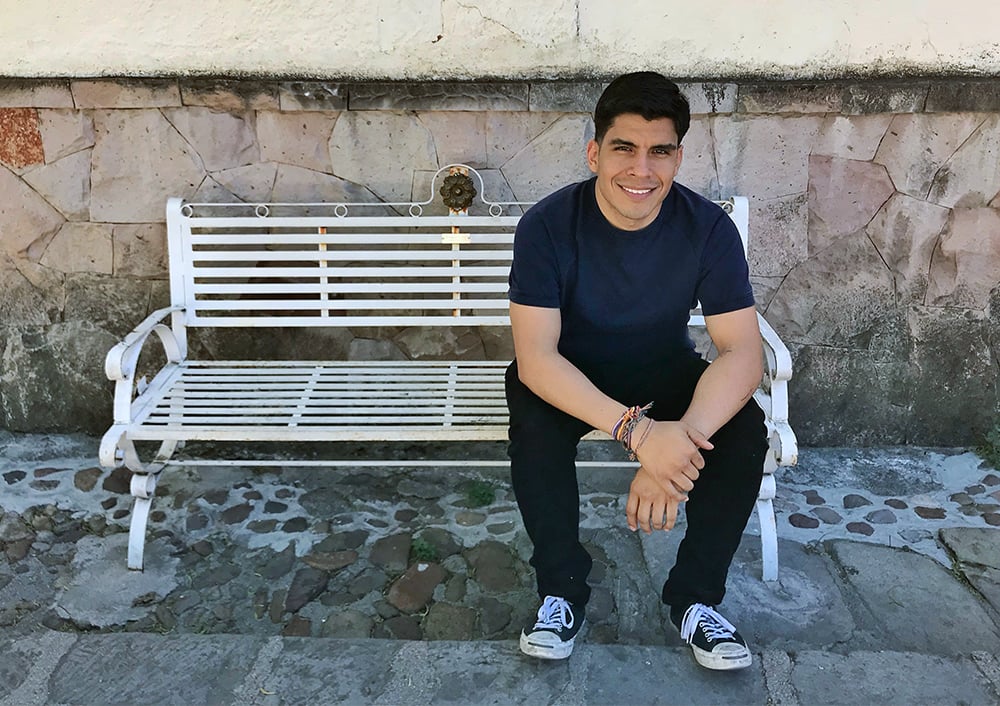 As he closes his fifth season, Santillan, who is also a lecturer and graduate journalism student at Cal State Northridge, has interviewed more than 85 Latinos in the LGBTQ community. Most are Catholic, though some are atheist, spiritual or don’t belong to a specific religion. He even interviewed his own Catholic parents who supported him after learning of his gay identity. Other interviewees have spoken about undergoing conversion therapy, navigating seminary school and coming out of the closet. Many, like Santillan, have roots in pueblos, small Mexican towns.

Though research shows U.S. Latinos are no longer majority-Catholic, nearly half of them still are. And for Santillan, it’s important to highlight how steeped in Catholicism his culture, family life and traditions are, both in the U.S. and in Mexico. Before coming out as gay in his early 20s, he looked for guidance in books, but most were written by white authors who didn’t reflect his experience. With his podcast, he hopes to help facilitate conversations between religious Latino parents and their LGBTQ children.

“I want to talk about who I am. I’m from a small town. I’m Catholic and I’m gay,” he said. “In these homes, it’s hard to speak about issues that don’t fit within the church teachings, like divorce, having children out of wedlock and being gay.” 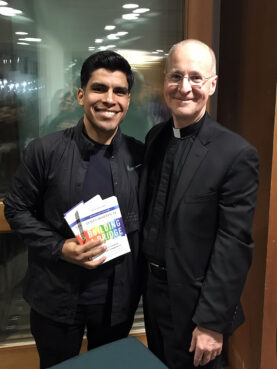 During his papacy, Francis has made overtures to creating a more welcoming environment in the Catholic Church. He recently made comments supporting gay civil unions. In 2015, he issued a call to the church to embrace Catholics who have divorced and remarried. Last year, he met with American Jesuit priest the Rev. James Martin at the Vatican to discuss LGBTQ Catholics — a move some saw as support for a priest who has called on Catholics to be more compassionate to LGBTQ people.

Santillan’s upbringing in the small Jalisco town of Encarnacion de Díaz was immersed in the church. He has an uncle who is a Franciscan friar, a cousin who is a nun and an older brother who studied to become a priest. The town is centered around the main local parish. Growing up, he said he heard priests condemn homosexuality in their sermons and homophobic family gossip about those thought to be gay.

As a child and in his early teens, Santillan would pray to not be gay.

“I wanted to be able to like girls so one day I could get married and fulfill that part of the religion and procreate and have children and make my parents happy,” he said. “When it wouldn’t come true, that’s when I started to think, ‘wow he (God) really hates me.’”

Santillan distanced himself from the Catholic faith while at college at Cal State Northridge in the San Fernando Valley. He met other LGBTQ people who introduced him to gay clubs in West Hollywood. He made friends with people who were Buddhist, Christian and who belonged to spiritual groups that were inclusive of the gay community.

Around that time, he went to Europe with a friend and spent time in Rome. He remembers walking into a small chapel and seeing a shrine of Our Lady of Guadalupe. Immediately, he said, “I felt like I was seeing my mom. That’s how I was raised to see her.” 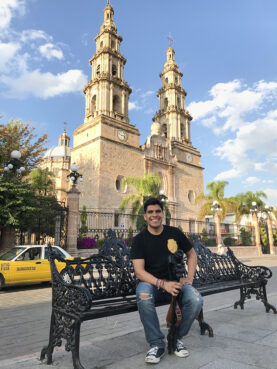 Santillan recognized he couldn’t separate himself from his Catholic upbringing. He spoke with a couple of Franciscan priests in and outside his family who affirmed he could maintain his faith and gay identity. He decided to reconcile with his faith and the church.

“I started to learn that there’s a difference between what God and my relationship with him looks like … and what somebody with maybe their own internalized homophobia from an altar is trying to tell me God thinks of me,” Santillan said. “That’s how I started to reconcile with those things.”

Through his interviews, Santillan realized just how many people like him prayed to be accepted by their church community and families.

“I think a lot of people assume we would hate the church, but that was the only thing we were clinging on to, and we wanted acceptance from God,” Santillan said.

“Religion just adds this extra level of guilt to the queer experience that is often not talked about,” he added.

In one interview on the podcast, a woman who grew up in the Catholic faith said she realized she liked girls at the age of 10 and would “ask God to change me … because I didn’t want to be rejected.”

In another episode, Edwin Soto, a Christian man, recalled telling his mother he was gay and he believed God still loved him. She responded by saying she also loved him but brought up the Bible’s teachings. 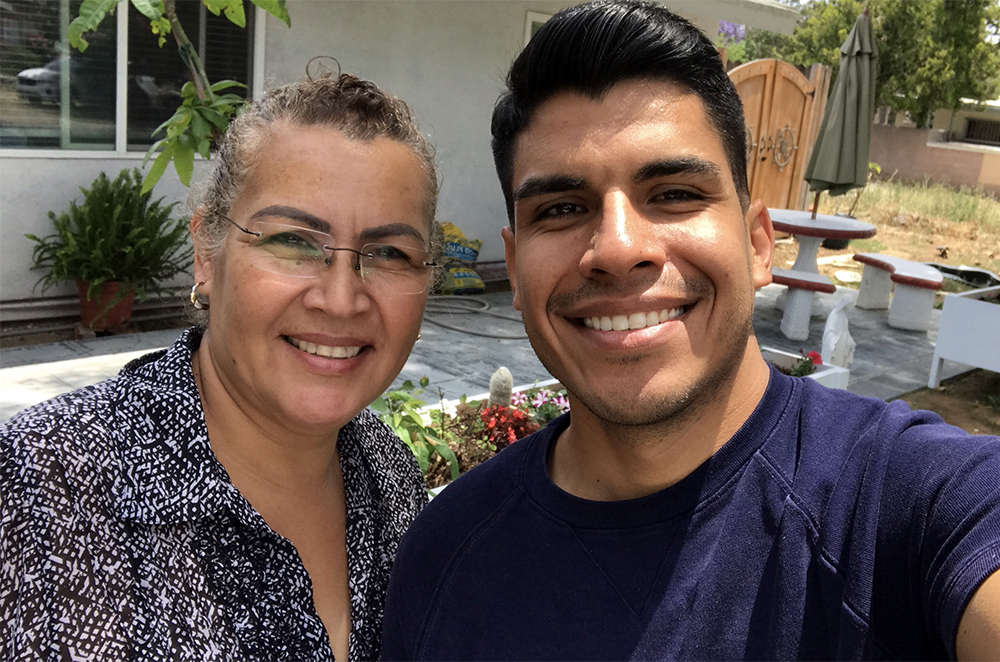 “You know what we believe, what the Bible says about men who sleep with men,” he recalled her telling him. “I said, ‘yes, mom. I know. I have been the one who has fought this for more than 20 years.'”

Santillan said most of those featured reached out to him for an interview after listening to the podcast. Feedback has been positive, mostly from people who identify with it on a personal level or from mothers who want to connect with their kids. He has gotten at least two direct messages from Catholic priests.

“They praise my work, but when I have extended them invitations to be on the podcast, because I have yet to have a priest on, they all politely decline,” Santillan said. 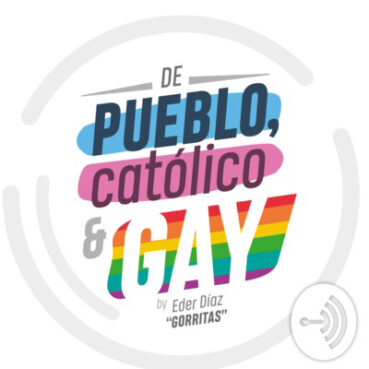 Santillan said he is encouraged by Pope Francis’ statements about the LGBTQ community and is also inspired by the work of Father James Martin.

“I still have hope for the church, but I understand it’s going to take a lot of work for the church to get there,” Santillan said. “That’s why I’m happy people like me don’t leave the church, because we’re the ones that are going to do the work.”

Santillan said he prays every day and confesses directly to God but no longer asks God to change who he is.

“I know God made me the way I am, because I asked him to change me and he didn’t,” Santillan said. “God wants me to be this way.”

Signs of the Times
Avoiding a deadlocked conclave
Follow us on Facebook!
Submit your photos to RNS