(RNS) — The scene around the Capitol on Wednesday (Jan. 6) may look like a set piece from the “Ten Commandments” movie, as scores of Jericho March participants lift shofars to their lips.

Shofar blowing, an ancient Jewish ritual, is usually reserved for synagogue sanctuaries. On Rosh Hashana and Yom Kippur, Jews rise to hear a member of the congregation blow the ram’s horn to awaken their souls and prompt them to return to God.

But over the past few decades, the Jewish ritual has been overtaken by conservative evangelicals, charismatic and Pentecostal Christians.

While many of them are Christian Zionists who support the state of Israel and have worked to strengthen the bond between Christians and Jews, a newer generation of Christians has come to regard the shofar as a weapon of spiritual warfare, much as the bugle was once used in battlefields.

Shofar blowing has become commonplace in many evangelical gatherings and political demonstrations far removed from any Jewish or Israel-related themes. Most recently, they’ve been used at worship leader Sean Feucht’s open-air concerts defying COVID-19 restrictions, at counterprotests opposing Black Lives Matter and in various Stop the Steal events, such as the one that took place on the steps of the Supreme Court on Dec. 12, and, of course, at the Jericho March this week. In these protests, the shofar is typically plastered with images of the American flag or red, white and blue colors. 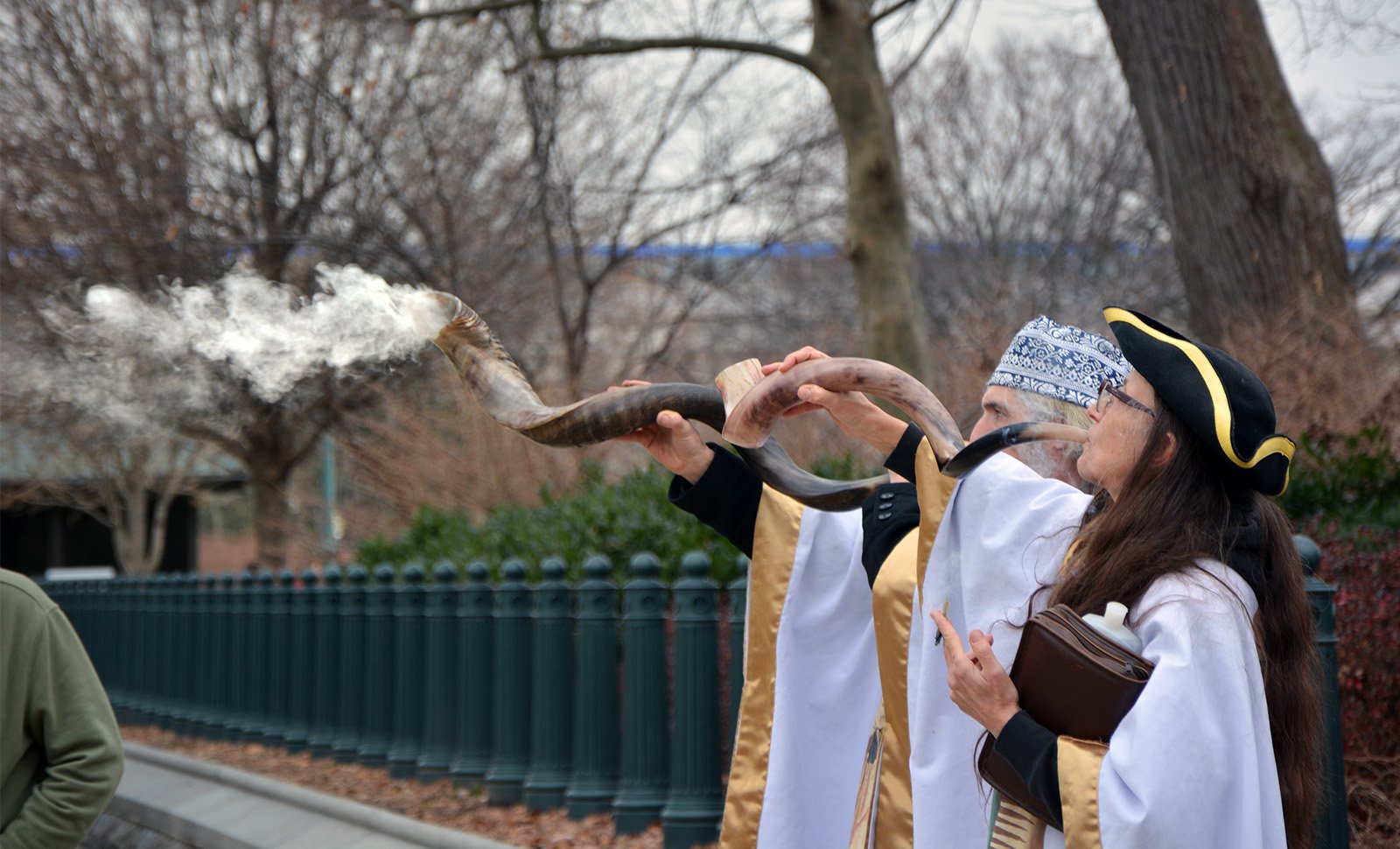 The Rev. Anne Armstrong of the Healing Church of Rhode Island, right, and a companion blow smoke through shofars during the Jericho March near the U.S. Supreme Court on Jan. 5, 2021, in Washington. RNS photo by Jack Jenkins

“For the people who are coming to these marches, I don’t even know if they know (that the shofar) is a distinctly Jewish symbol or a Judaic-Christian symbol,” said Dan Hummel, research fellow in the history department at the University of Wisconsin-Madison who has written on evangelical and Jewish relations. “It’s a much more militaristic sign.”

In D.C. on Wednesday and other places around the country, the marchers are harking back to the biblical account of Israelites besieging the city of Jericho. In that story, an army of Israelites encircled the city seven times, blowing trumpets (in Hebrew, “shofars”) and shouting until the walls of the city came down and the city was won.

This week, the protestors blew shofars in the hopes Congress might invalidate enough votes to give President Donald Trump a second term — an unlikely outcome that would require a majority in both houses of Congress.

The shofar is harvested from the carcass of a ram’s horn or almost any other kosher animal; antelopes have particularly beautiful spiraling horns. They’re widely available online for as little as $30, though they can fetch much more.

Generations of Jews have found the plaintive wail of the shofar to be the highlight of the High Holiday services and for some, the entire Jewish liturgical year.

But beginning with the establishment of the state of Israel in 1948, which many evangelicals saw as the fulfillment of biblical prophecy, some Christians began warming to ancient Jewish practices, which they had previously rejected. The shofar was one; the Passover Seder, another. In many such gatherings, participants break into what they call “Davidic dance.” 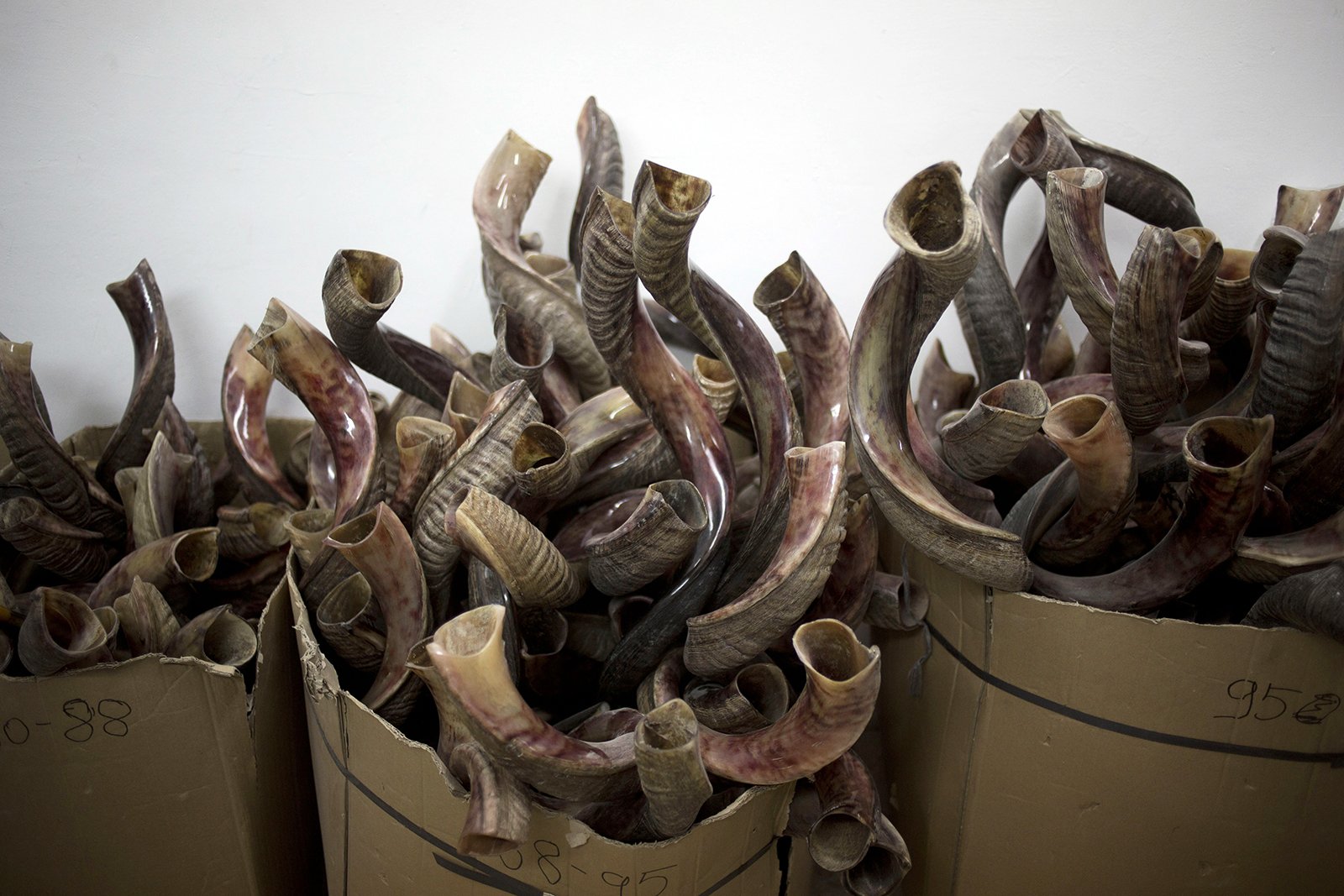 Shofars for sale at a workshop in Tel Aviv, Israel, on Sept. 22, 2014. A shofar is traditionally blown during several Jewish holidays. (AP Photo/Ariel Schalit)

“It all becomes a way of wrapping yourself around what is assumed to be God’s preferred cultural expressions,” said Gary Burge, a professor of New Testament and dean of the faculty at Calvin Theological Seminary in Grand Rapids, Michigan.

The rise of Messianic Judaism in the 1960s and 1970s further popularized Jewish ritual practices, such as the blowing of the shofar.

Messianic Jews combine Christianity with elements of Judaism. Their congregations blow the shofar on Rosh Hashana, which they call Yom Teruah, or the “Day of the Sounding of the Shofar,” as the Bible instructs in the Book of Numbers (29:1).

Much of Messianic Judaism was inspired by the charismatic Jesus movement of the 1960s, said Neal Surasky, director of publications for Chosen People Ministries, a group that tries to both evangelize Jews and bring love of Jews to the church.

“The Jesus movement created a new influx of messianic culture that brought with it those things that were typically Jewish in origin into the church,” said Surasky, who also leads a Messianic Jewish congregation in Columbia, Maryland. ”A lot of Christians today are attempting to put Jesus back into his Jewish context.”

Surasky pointed out that the word “trumpet” appears in the New Testament Book of 1 Thessalonians,  too, where it says Jesus will return “with the trumpet call of God.” 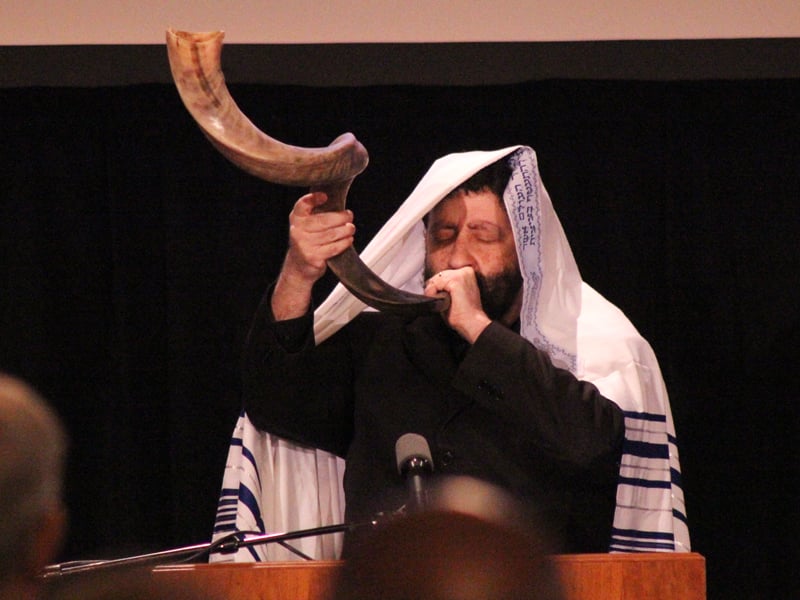 Rabbi Jonathan Cahn, a Messianic Jew from Wayne, New Jersey, blows a shofar during the national observance of the 2016 National Day of Prayer in Washington. RNS photo by Adelle M. Banks

But the use of the shofar really took off in the 1980s with the rise of the International Christian Embassy, a global organization that seeks to connect the church to Israel. Based in Jerusalem, the organization holds a massive gathering of thousands of mostly charismatic Christians each year during the Jewish holiday of Sukkot, where participants march around Jerusalem blowing the shofar.

For these Christian Zionists, the link to Israel is grounded in a biblical passage where God tells Abraham, “I will bless those who bless you and curse those who curse you” (Genesis 12:3).

“They see that as God’s transactional promise to Christians,” said Hummel.

American Jews have not always appreciated the Christian commandeering of the shofar.

“As Jews, we are quite accustomed to the ways in which others have inappropriately appropriated our sacred rituals and objects for uses that overtly subvert their intended purposes,” said. Rabbi Aaron Alexander of Adas Israel Congregation in Washington.

But for many Christians, such as those marching in D.C. to protest the certification of the election, the blowing of the shofar has transcended that tie to Israel or to Judaism.

“I doubt many people in the Jericho March know that history,” he said. “They’re using the shofar for their own political expressions.”