(RNS) — The questions about the attempted insurrection on Jan. 6 have yet to slow down: How did the right-wing extremists organize? Did the president actually have a role in encouraging this movement? Did law enforcement make it easier for them to penetrate the halls of the U.S. Capitol building, or were security teams woefully unprepared?

But, a question we keep returning to in the aftermath is quite simply: Who would do this?

And a few questions follow: What share of Americans support this type of behavior? And what did religion — specifically Christianity — have to do with it all?

While publicly available data doesn’t yet exist about the insurrection at the Capitol, a survey conducted by the Baylor Religion Survey in 2014, before President Donald Trump’s ascent, may provide some insight.

The survey, which can be found on the Association of Religion Data Archives site, asked the following prescient question: “Do you think that it is ever justified for citizens to take violent action against the government, or is it never justified?”

The answers to this question don’t seem to break cleanly along partisan or religious lines, but within this puzzle there’s some sense the Christian nationalism on display last week was more nationalist than it was Christian.

Speaking generally, in Baylor’s entire sample, 27.9% of respondents said violent action against the government would be justified — indicating huge swaths of the public oppose violent insurrection.

But a worrisome minority are not repulsed by this type of violence, and in analyzing church attendance among those who do support it, we might start to understand the role religion did or did not play in last week’s events at the Capitol. 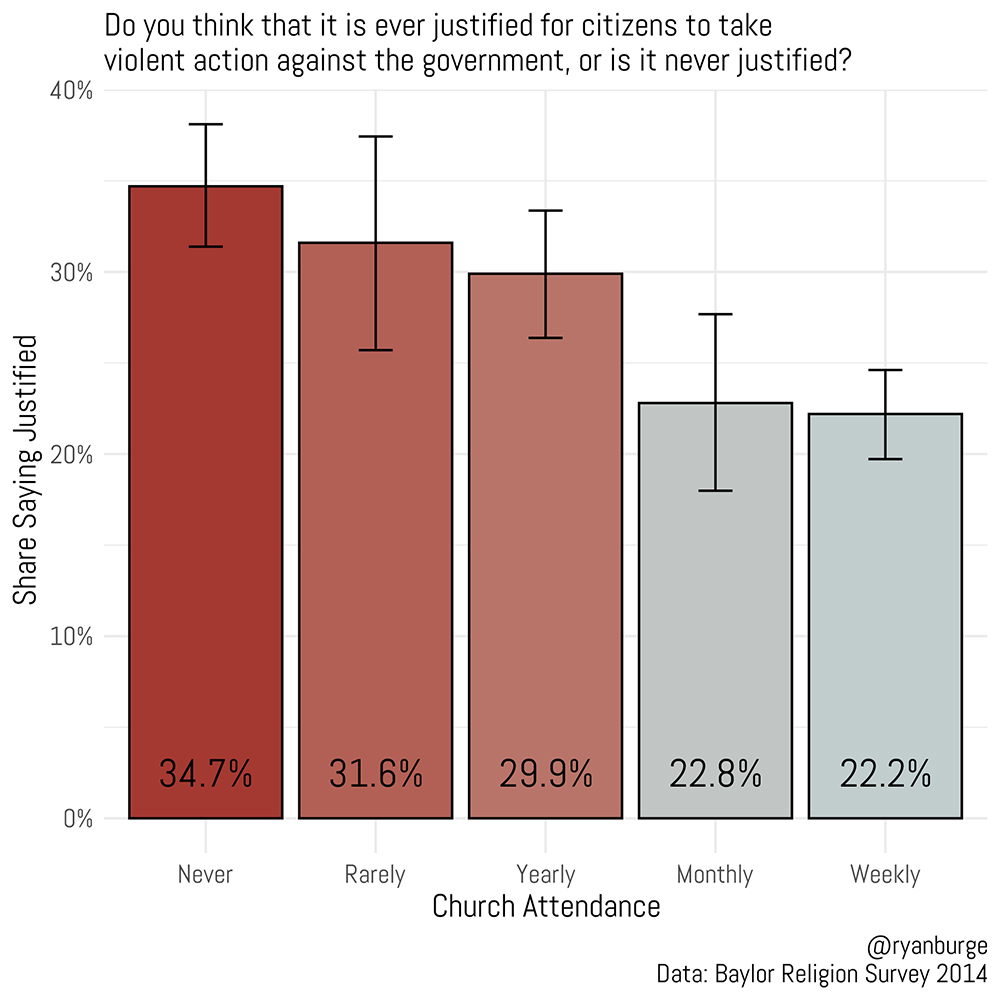 There is, first of all, an unmistakable negative relationship between church attendance and supporting violent revolutions against the government. Among those who say they never attend church services, at least a third of respondents believed there are times when these types of actions are permissible.

As attendance increases, support for violent insurrection consistently goes down. Weekly church attenders are clearly the most opposed to these actions: Only about 22% indicate support for violence in this context.

But when political partisanship is incorporated into church attendance, a different pattern begins to emerge. 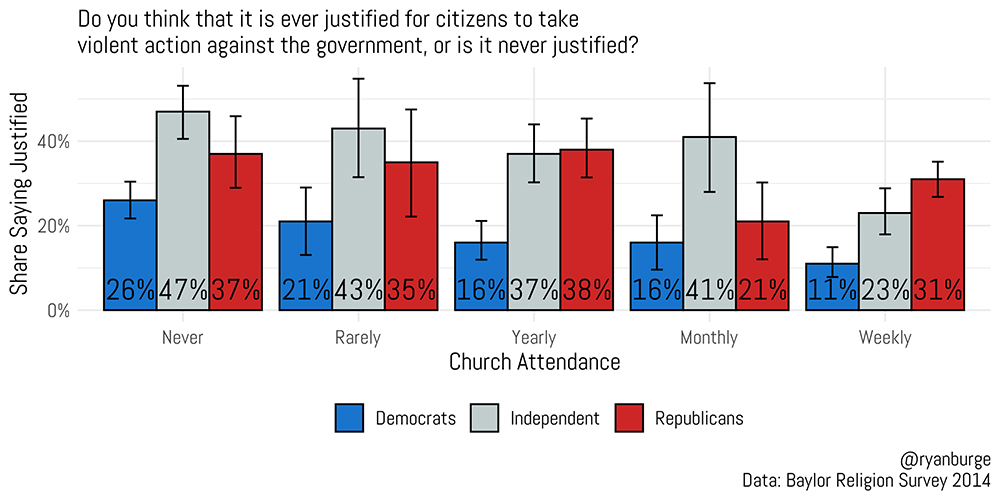 Clearly, Democrats are less supportive of violence than Republicans at all levels of church attendance. And, as Democrats attend church at higher rates, that propensity toward violence goes down even more.

But the same is not true for Republicans. Church attendance doesn’t have a statistically significant impact on their support for violence against the government. This gap is also incredibly large in some cases. For instance, a Republican evangelical is three times more likely to support violent action than an evangelical Democrat. This partisanship gap for Catholics is the smallest of all the traditions (about 7 percentage points).

Overall, Democrats are less supportive of violent behavior than their Republican counterparts at all levels of church attendance. The gap between Republicans and Democrats is consistently around 10 points.

Before we jump to conclusions about the role of religion, it’s important to note the picture that emerges becomes a bit murky when a model is specified that includes controls for demographic factors such as age, gender, race, income and education. 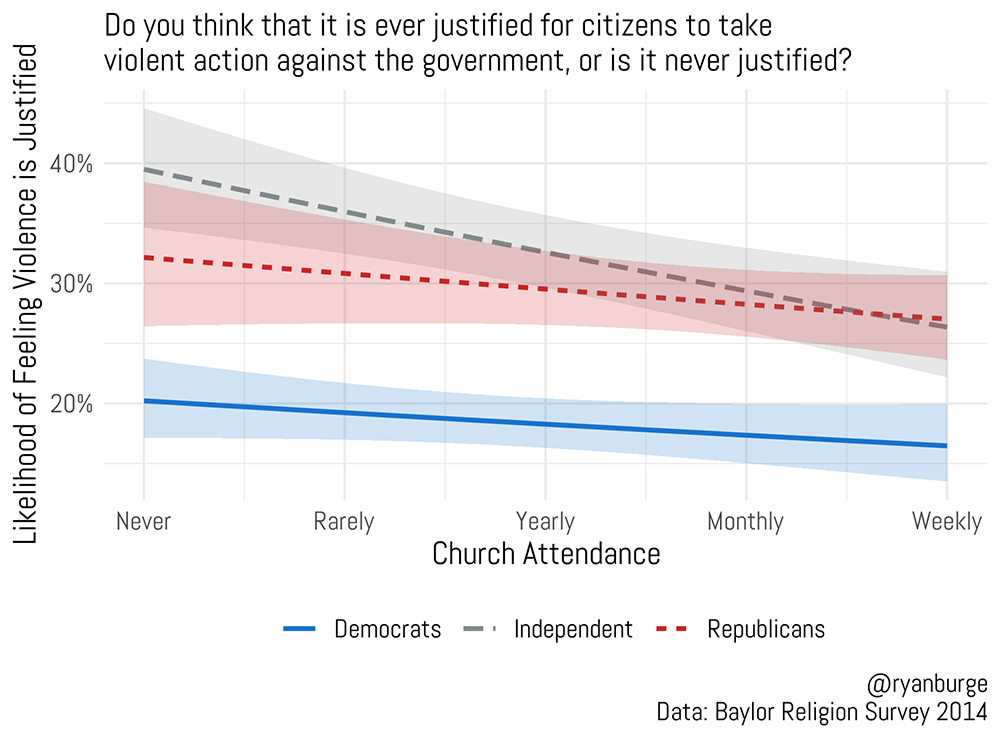 With controls applied, the Democrats’ resistance to violence against the government applies whether they attend church or not. A Democrat who attends church once a week is no more or less likely to support violent revolution than one who never attends. And crucially, the same is true for Republicans.

Church attendance does not appear to throw fuel on the fire nor to tamp it down. It’s neutral — or at most a come-along to the conservative ideology that more likely propelled the riot.

The only case in which that is not true is for political independents. The more they attend church services, the less supportive they are of violence against their government.

The factors that drive people to violence are myriad and may change from day to day, and extrapolating this 2014 data to the current series of events would be unwise. Clearly, those involved in the incident at the Capitol were fighting for Republican causes, and there could certainly be instances when an issue that led to violence against the government may be in support of more progressive ideals.

It would seem likely that responses to these questions would turn largely on the type of civil rights that were being violated. Thus, it is noteworthy this data was collected in 2014 when Barack Obama was the president, and Trump was only a minor political figure on the national political landscape.

If these results tell us anything, it’s that the social world is incredibly complicated and that factors related to religion and/or politics run across a number of different tracks. Sometimes they combine to form clear and unmistakable conclusions and other times they tell a more nuanced story. Clearly, this one is in the latter category.

Despite the causes of the insurrection, we know the majority of Americans are appalled by what they saw splashed across their television screens on Jan. 6, and it’s likely their appetite for violence was tamped down when they saw what was happening in real time on what should have been a boring, procedural day in our nation’s capital.

Donate Now!
Posted in
Ahead of the TrendChristianityFaithOpinionPoliticsU.S.