WASHINGTON (RNS) — References to faith were a constant at last week’s impeachment trial for former President Donald Trump, with Democrats appearing especially comfortable invoking religion when discussing the attack on the U.S. Capitol by insurrectionists on Jan. 6.

Religious rhetoric was common during Trump’s first impeachment proceedings in 2020 as well, when Republicans and Democrats engaged in a theological war of words that culminated with Trump delivering a scathing speech before the National Prayer Breakfast in which he challenged the public faith expressions of political opponents such as Utah Republican Sen. Mitt Romney and House Speaker Nancy Pelosi.

The pattern repeated this go-round, but it was Democrats who appeared most eager to utilize faith-infused arguments, signaling a resurgence of religious rhetoric among liberals.

One of the trial’s earliest religious moments surrounded Trump defense lawyer David Schoen, who was seen repeatedly covering his head when he paused to drink water in the Senate chamber. Some mocked Schoen’s habit, but the move likely had religious origins: Schoen, an Orthodox Jew who often wears a kippa, reportedly declined to wear the traditional Jewish head covering during his remarks because he didn’t “want to offend anybody.”

According to the Jewish Telegraphic Agency, many Jews not only recite a blessing that mentions God when eating or drinking, but also believe one’s head must be covered to say God’s name. 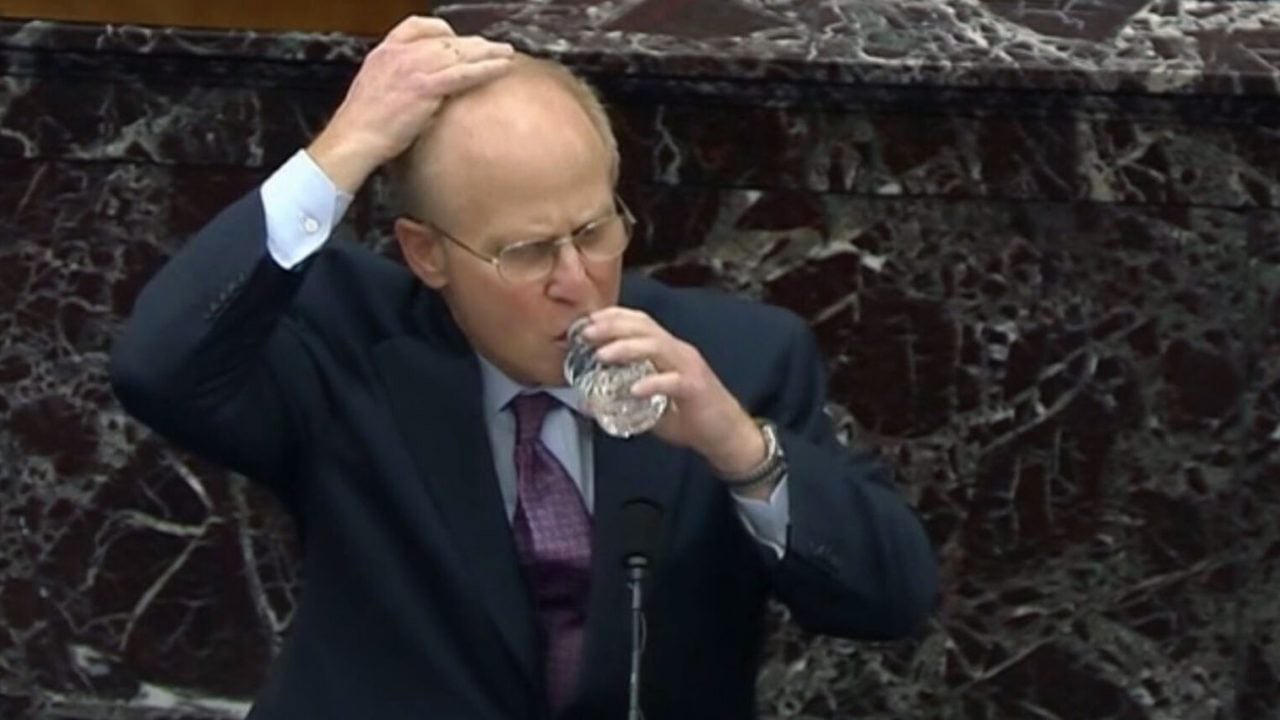 Attorney David Schoen covers his head for a moment during the impeachment trial of former President Donald Trump, Feb. 9, 2021, at the Capitol in Washington. Video screengrab via CSPAN

However, most other religious references were made by the Democratic House managers. On Wednesday, the gaggle of lawmakers was spotted by a New York Times photographer huddling for a prayer led by Rep. Madeleine Dean of Pennsylvania. According to a spokesperson for Dean’s office, the congresswoman told Rep. Jaime Raskin of Maryland about a brief prayer she learned from her uncle, who served as a Catholic priest for 50 years. Upon hearing it, they called over the group of House managers.

“May God grant success to the work of our hands,” she said.

Religion showed up again later that day when Rep. Eric Swalwell referenced Scripture while discussing police officers who defended the Capitol from the violent mob. The congressman noted he comes from a law enforcement family, then highlighted the efforts of Officer Daniel Hodges, a Washington D.C. Police officer who was on the frontlines of the skirmish with the insurrectionists.

“In many law enforcement families, we pray for our loved ones, and we know the Scripture of Matthew 5:9, ‘Blessed are the peacemakers, for they shall be called the children of God,’” Swalwell said. “In the (video) you will see how blessed we were on that hellish day. We had a peacemaker like Officer Hodges protecting our lives, our staffs’ lives, this Capitol and the certification process.”

Swalwell then played footage of Hodges crushed in a doorframe between police officers and the mob, bleeding and howling in pain as insurrectionists forcibly removed his mask and screamed in his face. (Hodges survived the encounter.)

Notably absent from the arguments of House managers were any references to the faith of the insurrectionists, despite numerous examples of religious expression during the attack — especially forms of Christian nationalism. House managers played clips of insurrectionists Jacob Chansley and Couy Griffin, for instance, but did not focus on their religious leanings: Chansley led a prayer in the Senate chamber during the attack, and Griffin was filmed praying before the masses in front of the Capitol.

Trump’s team also largely ignored the religious elements of the attack, although they did cite religious terminology as part of an unusual argument. They rejected the insinuation by House managers that a Trump supporter’s reference to bringing the “calvary” to Washington on Jan. 6 — a quote from a tweet that was later retweeted by then-President Trump — was an appeal to warlike violence.

A Trump supporter carries a Bible outside the Capitol on Jan. 6, 2021, in Washington. (AP Photo/John Minchillo)

Instead, Schoen insisted the phrase was not a misspelling of cavalry, or mobile soldiers, but an intentional reference to Christianity.

“The tweeter promised to bring the Calvary, a public display of Christ’s crucifixion, a central symbol of her Christian faith with her to the president’s speech, a symbol of faith, love and peace,” Schoen said. “(House managers) just never want to seem to read the text and believe what the text means.”

Schoen did not explain what, exactly, “the calvary is coming, Mr. President!” would mean for attendees of a Trump rally.

Their arguments did not appear overly persuasive to lawmakers like Sen. Bill Cassidy, a Republican from Louisiana who repeatedly praised the presentation of House managers. But when asked midway through the trial if he had “any doubt” Trump was responsible for the attack on the Capitol, he demurred by citing the Bible, saying: “There is a Proverb: Your mind is persuaded but you should hear the other side.”

On Friday, U.S. Virgin Islands House Delegate Stacey Plaskett — who often wore a gold cross around her neck during media interviews about the trial — pushed back against efforts by Trump’s legal team to compare unrest surrounding racial justice protests in the summer of 2020 to the insurrection. While decrying what she argued was a tendency by the defense to use clips featuring women of color, she made a reference to a religious group that protested in solidarity with racial justice protesters.

“This summer, things happened that were violent,” Plaskett said. “But there were also things that gave some of us Black women great comfort — seeing Amish people from Pennsylvania standing up with us. Members of Congress fighting up with us.”

It was unclear which instance Plaskett was referring to, although one group that was often described as Amish that participated in protests last year was in fact part of the Church of God.

Faith reappeared on Saturday during closing arguments delivered by Raskin, a co-founder of the Congressional Freethought Caucus who identifies as both a humanist and “emphatically Jewish.” While discussing the horrors of the attack on the Capitol, Raskin explained he was “never a great Sunday school student” but could recall at least one Scripture passage from memory.

He said: “One line always stuck with me from the Book of Exodus as both beautiful and haunting — even as a kid, after I asked what the words meant: ‘Thou shall not follow a multitude to do evil.’”

Religious references persisted even after the trial concluded with Trump’s acquittal, with Cassidy and six other Republicans siding with Democrats in a 57-43 vote that nonetheless fell short of the 67 votes needed to convict. When Swalwell was asked by MSNBC to explain why House managers ultimately decided against calling witnesses in the trial, he defended their decision by invoking the almighty.

“We could have called God herself and the Republicans weren’t going to be willing to convict (Trump),” he said. “So we’re proud of the case we put forward.”

Swalwell’s use of female pronouns for God sparked pushback from some conservative outlets, but the idea that God can be referred to by multiple gender pronouns — or transcends gender altogether — is common in many Christian circles.