(RNS) — Trump won the election. Places of worship must remain open during the pandemic. Antifa is more dangerous than white supremacists.

These views are standard among some evangelicals and Catholics.

But a new survey suggests that those views have permeated other religious groups, too, notably America’s small Orthodox Jewish community.

As a voting bloc, American Jews are liberal and vote Democratic; but among them, Orthodox Jews, who strictly adhere to traditional teachings, are increasingly voting Republican and spouting familiar conspiracy theories former President Donald Trump has stoked.

RELATED: When religion was present — and notably absent — at the impeachment trial

Among Orthodox Jewish Trump voters, Israel, Iran and terrorism were among the top concerns cited in a survey by Nishma Research, a Connecticut-based polling firm. Among Orthodox Jewish Biden voters, the coronavirus pandemic, “bringing the country together” and health care were the top three issues.

“Overall, it seems pretty clear that Orthodoxy has shifted toward Trump,” said Mark Trencher, president of Nishma and the study’s lead researcher, noting that among those who voted Republican or Democrat, “there were huge differences.”

Critically, three-fourths of those who voted for Trump questioned the election’s fairness.

The small survey did not try to determine how many Orthodox Jews voted for Biden and how many voted for Trump. There are big logistical challenges to polling some insular Orthodox Jewish communities that are cut off from smart phones or the internet. They also constitute a tiny fraction of the electorate, about .25% of 1% of the U.S. population.

But the survey does reveal that the kinds of political and ideological sorting into two clashing camps that has happened among other religious groups under former President Trump can be found American Jews, too.

“Like most of America, people are pulling away from each other and becoming more intense in their views from one side to the other,” said Rabbi Brad Hirschfield, president of the National Jewish Center for Learning and Leadership. “That’s happening in the Orthodox circle as well.”

Overall, 69% of U.S. Jews voted for Biden and 31% for Trump, according to The Associated Press’ VoteCast survey. (GBAO Strategies, which conducted an exit poll of American Jews for the liberal pro-Israel group J Street, found that as many as 77% of Jews voted for Biden.)

Orthodox Jews make up about 10% of the broader U.S. Jewish population. This group is split into two groups: Haredi Jews, who tend to view their strict adherence to Jewish law as largely incompatible with secular society, and Modern Orthodox Jews, who follow Jewish law while also integrating into the wider society.

Chief among them are Haredi Jews, who overwhelmingly voted for Trump, according to a New York Times interactive map of Haredi neighborhoods in New York City and in Rockland and Orange counties to the north.

Modern Orthodox Jews are thought to be split between Republicans and Democrats, though they, too, increasingly voted for Trump.

That shift toward the Republican Party has torn the Modern Orthodox Jewish community apart. 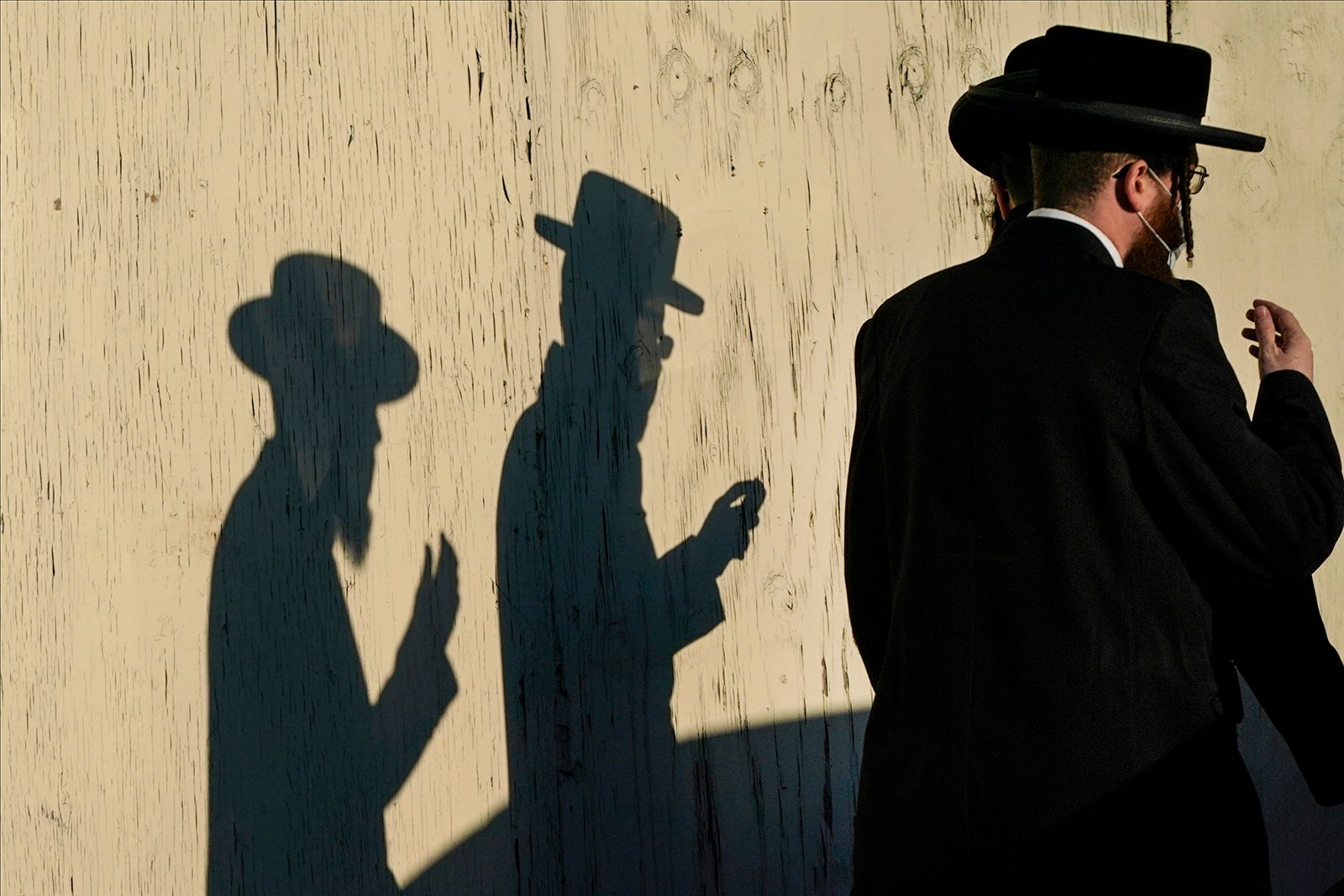 Men walk past the Yetev Lev temple on Nov. 23, 2020, in the Brooklyn borough of New York. (AP Photo/Frank Franklin II)

In October, Rabbi Barry Kornblau, who leads a small Modern Orthodox congregation in the New York borough of Queens, was castigated for calling on Jews to vote for Biden in a column that appeared in a New Jersey Jewish publication.

The attacks were vicious. But Kornblau said he prefers to remember those who said the piece made them feel less alone and isolated.

“Lay people and rabbis thanked me for articulating what they were thinking about the two candidates, and for providing religious legitimacy for that,” he said, noting many other rabbis cannot speak their minds for fear of alienating their members.

That month, journalist Jacob Kornbluh was kicked and beaten by a mob of angry Orthodox Jewish Trump supporters protesting coronavirus restrictions. He is himself an Haredi Jew but was assaulted for being a “snitch.”

Then, on Jan. 6, Orthodox Jewish communities from New York and New Jersey chartered several buses to drive down to Washington to hear Donald Trump speak at the rally that led to the Capitol assault, the Jewish Telegraphic Agency reported.

Aaron Mostofsky, a 34-year-old Jewish man from Brooklyn, was later arrested on federal charges related to the Capitol assault.

That kind of political polarization is now causing handwringing among some Jews and the creation of at least one group dedicated to healing the divide — the Jewish Alliance for Dialogue and Engagement or JADE.

But the persistence of those divisions nearly a month into the presidency of Joe Biden suggests that — much like among evangelicals and Catholics — they will not dissipate any time soon.

“Jews are obsessed with their own uniqueness,” said Hirschfield. “But there isn’t anything unique about us. The more successful and well-integrated we are into the fabric of America, the less unique we become.”

RELATED: Healing and unity? Not yet