(RNS) — When she was not allowed to play in her second volleyball game of the season, 14-year-old Najah Aqeel never thought her pushback would knock down nearly every obstacle in her way, like a bowling ball knocking over pin after pin.

Last September, the ninth-grader at Valor College Prep in Nashville, Tennessee, was pulled from the court after an official pointed out that her coach had not provided a waiver for her to play while wearing her hijab, or religious headscarf. When she was told she couldn’t play, Najah started crying. She received support from her family and teammates but still felt hurt. Then she began to push back.

Until this year, most schools, states and national high school athletic associations had typically forbidden religious headwear, citing safety concerns, unless a student or coach had applied for a waiver. No waiver, no play. 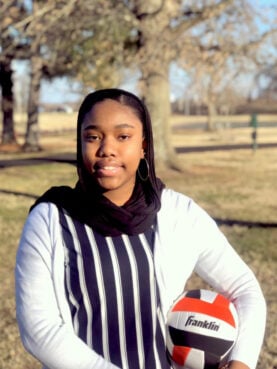 But Najah argued that her hijab wasn’t a safety concern, as she wore it as a closely wrapped bun. “It wouldn’t be able to hurt anyone,” she told me in an interview last fall.

She and her family decided that the waiver rule had to get changed, not only in her own school district, but across the state.

Because she (with the support of her team) stood up against the rule, the National Federation of State High School Associations, one of the main associations overseeing high school sports, eliminated the waiver requirement for religious headwear, including hijabs, turbans and yarmulkes, for the fall sports of field hockey, soccer and volleyball once their seasons concluded.

The magnitude of this step is not lost on me. In my two decades of covering Muslims in America, I’ve reported on a multitude of hijab bans, after having to obtain permission as a young girl to wear sweats in gym class and when I briefly played basketball and ran track, due to Islamic modest dress guidelines, and for my daughter to do the same decades later.

I’ve had to provide a letter to wear my own hijab in my driver’s license and passport photos as an adult. It’s something many Muslim girls and women are used to doing.

Pressure for change has been building. Last year, high school cross-country runner Noor Alexandria Abukaram was disqualified by the Ohio High School Athletic Association as she was running a 5K (and beating her personal record), because her coach hadn’t gotten a waiver for her to run in her Nike hijab, which is designed specifically for competitive running. 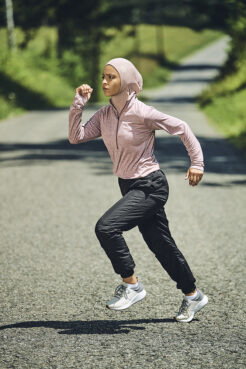 Bilqis Abdul Qaadir, a top-ranked high school and college basketball player, was denied from playing in the International Basketball Federation, or FIBA, which at the time didn’t allow headwear. That rule changed in 2017 because of persistent advocating by Qaadir and several other athletes and religious groups, including Darsh Preet Singh, the first turbaned basketball player in the NCAA.

It should be a no-brainer. Why should a high school or college athlete need to seek permission to wear a hijab, a turban or whatever is her religious observance?

My employer, the fashion company Haute Hijab, launched a “Can’t Ban Us” campaign last fall as Najah’s story broke to work with athletes and athletic associations to educate about the religious significance and mechanics of hijab and why it shouldn’t deter anyone from participating in team or individual sports.

In December, Haute Hijab met with Lindsey Atkinson, director of sports at the National Federation of State High School Associations and liaison to the volleyball rules committee, to present information about hijab, hijab accessories (pins), how it is worn, fabrics used, the construction of sports hijab and how risk factors regarding hijab have been overblown.

I asked Theresia Wynns, director of sports and officials with the federation, why the tide is shifting now, after so many years. “I think the momentum has come out of a result of more athletes who are religious and wanting to show their religious belief in wearing whatever … they need to wear for that.

The fierce young women who have pushed for their right to play wearing hijab are to whom these long-fought-for victories belong. Bilqis’ reprieve from FIBA came three years too late, but she is determined not to let what happened to her happen to other Muslims.

And Najah? At her recent news conference, she said she hoped her experience would be one of “many steppingstones to stop discrimination.”

It sometimes feels as if the only time we discuss Muslim women is when we are talking about objections to hijab, when that is just one part of multiple narratives. In the athletic world, this is what activist and journalist Shireen Ahmed called, in a 2016 article for The Daily Beast, reducing “an athlete to her outfit.” Hijab-wearing women are just stand-in, however, for women who suffer discrimination for Muslim dress.

“I’d like to send a message out there to all the women that our voices matter,” Najah said. “We need to stand up for our beliefs and values.”