(RNS) — Recently I listened to the “Latter-day Saint Women” podcast for an episode featuring Joy Jones, the president of the Primary, the church’s Sunday school organization. I was sucked in by the gossipy teaser in LDS Living that said that the day before she spoke in General Conference in October 2017, Jones had attended the funeral for her oldest child, and that the interview would address how she dealt with her grief at that time.

What? I didn’t recall her discussing a child’s death in Conference. I was sure I would remember something so significant.

It turns out that Jones didn’t mention her son’s death or funeral, though she did hold up as an example Taiana, a brave and cheerful young cancer patient who had just died a few weeks before.

I wondered if maybe, not wanting to break down in front of the entire global church (understandable!), she had powered through her talk at the time, betraying no hint of what her family was going through. Now, several years later, she felt more ready to discuss the pain she experienced at that time.

Not exactly. The podcast interview is a bit bewildering, frankly.

On the one hand, I’m glad the church is getting into podcasting, because it has the potential to help leaders and members understand each other in a deeper and more honest way. On the other hand — and I want to choose my words carefully here because Jones seems like an absolutely lovely human who has been through a terrible thing — this is not that.

I came to the episode hoping to see beyond the perfect smile and connect with a real person, someone who was willing to discuss grief and pain. Instead, the interview felt like a carefully scripted evasion of anything to do with grief and pain. 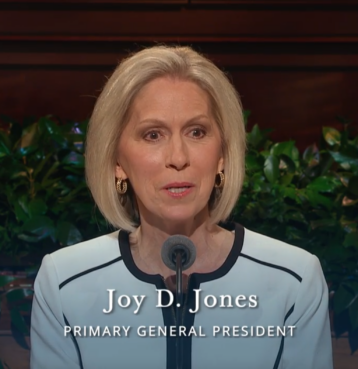 Joy D. Jones, the Primary general president, addresses the October 2017 General Conference of the Church of Jesus Christ of Latter-day Saints, shortly after the funeral of her son Trevor. Video screengrab

Jones doesn’t come out and say that her son died, preferring euphemisms like “his passing,” “after he left this earth” and “passed through the veil.” She seems ambivalent about even acknowledging that she was in mourning.

“It’s interesting, that word loss,” she says in the interview. “It was such an interesting experience to try to determine if I was experiencing grief. I looked up the definition of grief and it referred to loss, and I thought, ‘I’m so sad, and I miss my son, but I cannot feel grief because I have not lost him.’”

“I cannot feel grief because I have not lost him” … Have I misheard? She’s saying there has been no loss? But no, Jones goes on to describe how her family marked his death not with a funeral but with a graduation, how her little granddaughter was excited because her daddy was going to be the best guardian angel ever, and how they are all still engaged in the same gospel work, just on different sides of the veil.

“It’s hard to say I’m grateful for that experience, but aren’t we to be grateful in all things?” she asks. “And I am grateful for what I’ve learned, for what Heavenly Father taught me. He knew what we needed to learn from this experience, all of us. And it has been truly remarkable to experience a ministering angel from across the veil, blessing our family, blessing his wife and his beautiful five children. They’re just happy, and he’s still a part of our lives. He’s not gone; he’s still with us.”

It was a heartbreaking interview for me to hear, in that she seems to feel that it’s wrong to communicate (or perhaps even to feel?) any anger or sadness about her son’s death, or even to say the word “death.”

As I write this I am feeling intense Mormon Lady Guilt because I’m about to pile on to all that pain she is denying, and say that this is not the healthiest example to uphold to members of the church who are in the throes of grief.

The very first of the five stages of grief is denial; we are not meant to abide there.

I hope that privately, Jones has also cycled through some anger, bargaining and depression before arriving at the acceptance stage of grief. I imagine she has. But she’s not alone among Latter-day Saint leaders in suppressing negative emotions as somehow faithless. We’ve unwittingly created a culture in which it is considered unbelieving to rail at God. Our religion’s accelerating quest for assimilation, our desire to be perceived as special and admirable in the eyes of the world, means that whatever we experience that is less than perfect needs to be quashed.

Especially anger, and especially if it’s coming from women. Anger is unacceptable. And since anger is a legitimate and necessary part of grief, the whole project of grief then becomes suspect.

Which is weird, given that we are a people who follow Jesus, and he was apparently comfortable with both anger and grief. When, in the Gospel of John, Mary and Martha reproached him for not being there at the death of their beloved brother Lazarus, he didn’t defend himself by saying what he already knew for certain: that death was not the end. That Lazarus would rise.

Instead, he simply wept. He wept for the loss of his friend, and did not apologize for his tears. He did not explain the death away, say Lazarus was in a better place or reproach the sisters for their “If you had only been here!” accusations.

In fact, what Jesus does in John’s Lazarus story is instructive to us when we grieve. He doesn’t let the disciples get away with using the euphemism that Lazarus is merely sleeping, but declares flatly, “Lazarus is dead.”

In the chapter that follows, Jesus submits to the anointing of Lazarus’ sister Mary, who breaks open a costly lot of spikenard and anoints his feet with it. What she is doing is preparing his body for burial. It’s a mourning ritual, one she’s initiating in advance. Jesus has just raised one man from the tomb; he is about to enter it himself. Both Jesus and Mary of Bethany are refreshingly matter-of-fact about this reality. I hunger greatly for deeper connections at church, a frank acknowledgment that many of us are the walking wounded. And judging from the emails I receive from readers, I’m not alone in feeling alone, or in wanting the gospel to be more than a shiny success narrative that expunges whatever emotions or experiences prove untidy.

This is what vulnerability means: to make ourselves open to woundedness. Lately I’ve been listening to the new book “Wintering: The Power of Rest and Retreat in Difficult Times,” by Katherine May. I don’t agree with everything in it, but I recognize the wisdom in her critique of our Western allergy to pain and darkness.

Metaphorical wintering comes to all of us, she says, and there’s little point in avoiding that fact. When we are “endlessly cheerleading ourselves into positivity while erasing the dirty underside of real life,” we are not ministering to the hurting. We’re sometimes adding to their pain and isolation.

“The subtext of these messages is clear: Misery is not an option,” May writes. “We must carry on looking jolly for the sake of the crowd. While we may no longer see depression as a failure, we expect you to spin it to something meaningful pretty quick” (Page 235).

I get it that grief can be terrifying. My own experiences with it, some of which I’ve written about here, have been harrowing. By which I mean that they’ve been tortuous and excruciating, which is the main definition of “harrowing,” but also that they’ve been sanctifying and saving, which is a secondary meaning.

Grief teaches us that we can descend to the very depths of hell and live to tell the tale — which is itself a resurrection story.

Mormons and grief: Can we do it better?

Grief and the six-month anniversary