(RNS) — A group of Apache peoples and other Native American and non-Native supporters has filed an emergency motion to stop the U.S. government from transferring an Apache sacred site in Arizona to a mining company in the next two weeks.

The destruction of Chi’chil Biłdagoteel, known widely as Oak Flat, by mining would violate the Religious Freedom Restoration Act, according to the motion filed Tuesday (Feb. 23) in U.S. District Court by a group called Apache Stronghold.

“They declared war on our religion. We must stand in unity and fight to the very end, for this is a holy war,” Apache Stronghold founder Wendsler Nosie Sr. said on the group’s website.

Oak Flat is a 6.7-square-mile stretch of land east of Phoenix that falls within Tonto National Forest. It sits at the center of a cross formed by four sacred mountains, according to attorney Luke W. Goodrich of the Becket Fund for Religious Liberty, which is representing Apache Stronghold.

“Some have compared it to Mount Sinai for the Jews,” Goodrich told Religion News Service. “It’s like a central channel between the creator and the Apache, and there’s a lot of religious practices that must take place in Oak Flat.”

The Apache believe Oak Flat is a “blessed place” where Ga’an — guardians or messengers between the people and the creator — dwell, according to the motion. The Apache have lived on, worshipped on and cared for the land since “before recorded history,” and continue to hold a number of important ceremonies there, it said.

“Only there can their ‘prayers directly go to (the) creator,’” it continued.

On March 11, the U.S. is scheduled to transfer control of 2,422 acres, including Oak Flat, to an Australian mining company, Resolution Copper, according to the motion. The company plans to construct a mine that would collapse and destroy the sacred site in a nearly 2-mile-wide, 1,100-foot-deep crater, it said. 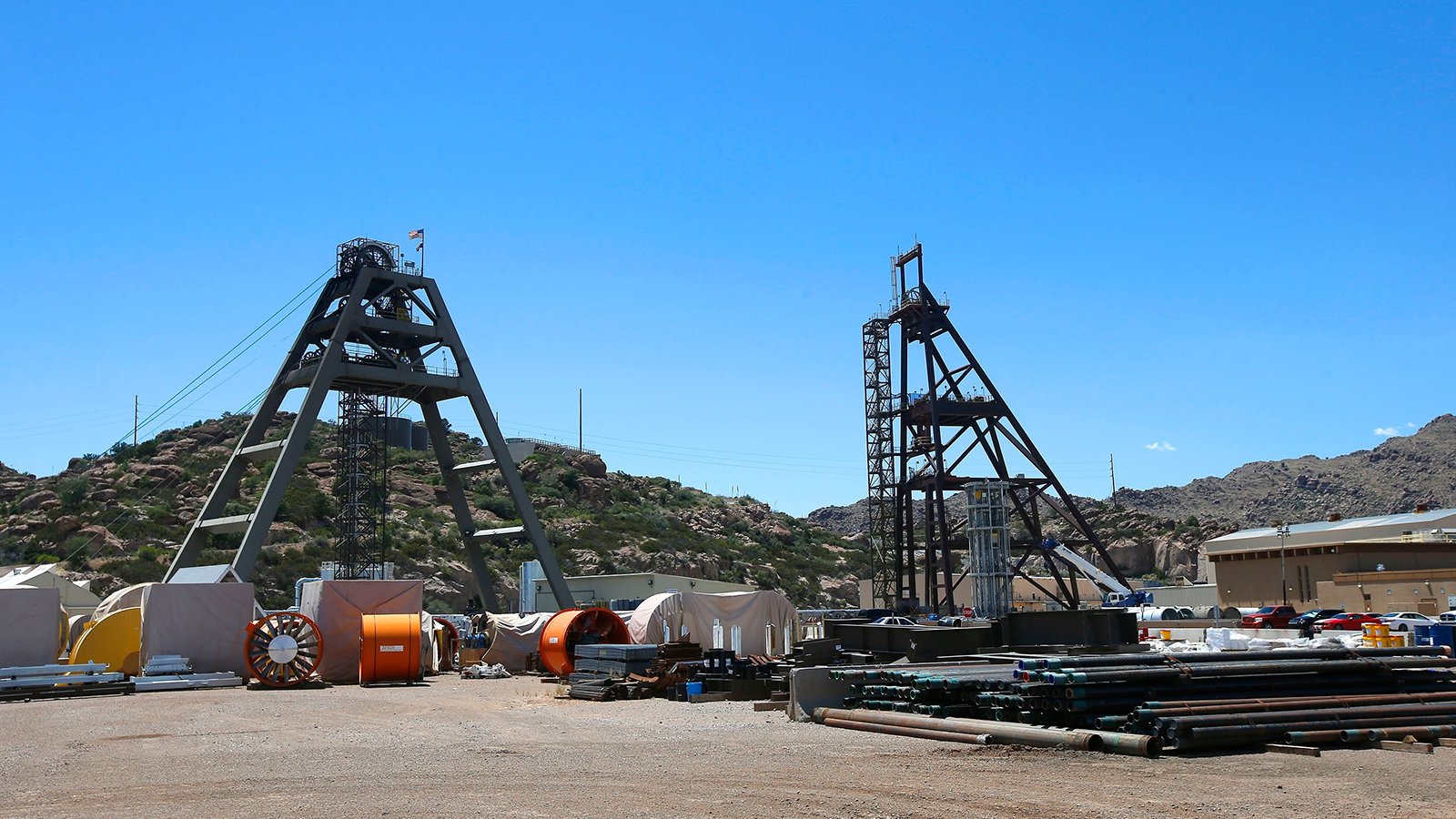 This file photo taken June 15, 2015, shows the Resolution Copper Mining area Shaft #9, right, and Shaft #10, left, that await the expansion go-ahead in Superior, Arizona. The U.S. Forest Service released an environmental review  Jan. 15, 2021, that paves the way for the creation of one of the largest copper mines in the United States, against the wishes of a group of Apaches who have been trying for years to stop the project. The mountainous land near Superior is known as Oak Flat or Chi’chil Bildagoteel. It’s where Apaches have harvested medicinal plants, held coming-of-age ceremonies and gathered acorns for generations. (AP Photo/Ross D. Franklin, File)

That transfer, which revokes an order by former President Dwight Eisenhower to protect the land, was approved as part of the 2013 National Defense Authorization Act in exchange for 6,000 acres elsewhere.

Nosie, former chairman and councilman of the San Carlos Apache Tribe, has called the land exchange “the greatest sin of the world.”

With Apache Stronghold, he has called on people of all religious faiths to join them in protecting Oak Flat, noting on the website, “this country was founded on freedom of speech, religion and worship, which has been given away to a foreign mining company.”

Some Christian leaders have spoken out in support of Nosie’s efforts, including the Rev. William Barber II, president of Repairers of the Breach, a constitutional advocacy group. The organization gathered more than 90,000 signatures on a petition urging lawmakers to protect the land.

Apache Stronghold first filed a lawsuit in January to stop the completion of the final impact statement that would start a 60-day countdown to transfer Oak Flat to Resolution Copper.

The district court denied a previous request for a preliminary injunction. The latest motion requests a decision by March 2.

That gives Apache Stronghold time to appeal to the Supreme Court if it is denied again before the transfer would happen, according to the motion.

Becket is a legal group that specializes in religious liberty and is best known for high-profile cases involving religious conservatives, such as Little Sisters of the Poor v. Commonwealth of Pennsylvania.

News
As smudging goes mainstream, concerns rise over appropriation, overharvesting
Follow us on Facebook!
Submit your photos to RNS