WASHINGTON (RNS) — A decade ago, photographer pals Joel Hoffman and Roy Sewall made a pact to start a project capturing images along 16th Street, the iconic boulevard that stretches from the White House to the Maryland border.

Little did they know back in 2011 that it would turn into a nine-year adventure that documents dozens of houses of worship as well as homes, embassies and other buildings.

The Maryland suburbanites, both shooting with Canon cameras, set a couple of ground rules, the first being that they would strive to shoot together on what ended up being 26 weekend outings over almost a decade.

“Two, we wanted to make sure that we could shoot anything that we wanted — whether it was a building or a place of worship or a statue or a monument didn’t really matter,” Hoffman said at a February 20 workshop hosted by the DC History Center, which now oversees the digital collection of 1,868 images. 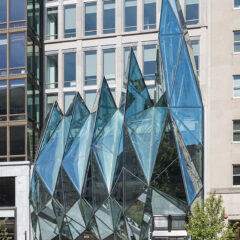 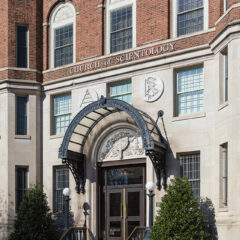 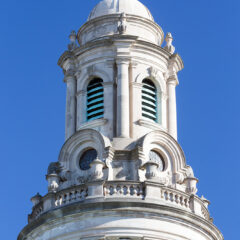 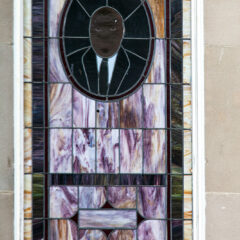 RELATED: From civil rights to no nukes: A look at historic protest photos

At the photographers’ first stop — and the first of many churches — two women came out of the stone building to inquire about what they were doing.

“‘Why don’t you come on in?’” Sewall recalled, in a joint interview, of their conversation with the members of Northwest Community Church who invited the two men to partake of sandwiches and coffee between services and to stay for the next one. “They were so welcoming that it kind of got our project off to a happy start.” 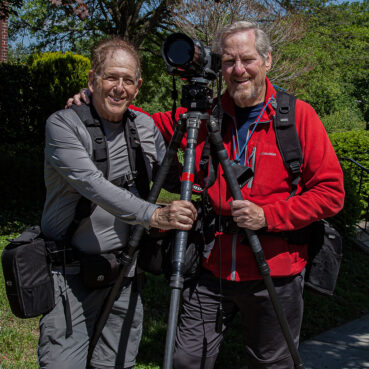 But the pleasant interchange led to another rule for their project starting that day: They declined such offers, sticking to their plan of photographing the outside of buildings and moving from one to the next, sometimes carefully crossing the often-busy street to improve their shots.

“We weren’t really dressed,” said Hoffman, 78, who is a Reform Jew. “They were in their Sunday best, and we had camera gear all over us and tripods. So we just thought it wouldn’t be appropriate.”

Added Sewall, 75, who has a Presbyterian background: “If we went into every place that invited us in, we’d never get going. So we were pretty determined to get so many buildings done each day.”

Anne McDonough, deputy director of the DC History Center, said the organization was interested in not only the hundreds of photographs taken by Sewall and Hoffman but the information they compiled about each photo, including the addresses of each structure.

“That is really helpful,” she said, “particularly when you’re looking at visual documentation of a city that rapidly changes.” McDonough said the collection, which is likely to be helpful to scholars and journalists decades from now, is already drawing inquiries from researchers working on documentaries about religious institutions or architectural histories of structures along 16th Street. More than 80 people attended the recent workshop.

Hoffman, who lives in Gaithersburg, has long done photographic work related to religion as a chronicler of weddings, bar mitzvahs and baptisms. Sewall, who lives in Bethesda, had hardly done any religious photography, except for a 2015 exhibit on church organ pipes.

In a deal sealed last March — right before the COVID-19 pandemic halted regular operations — the center and the photographers agreed Hoffman and Sewall would hold the copyright on their images until 2030, when it will transfer to the center. 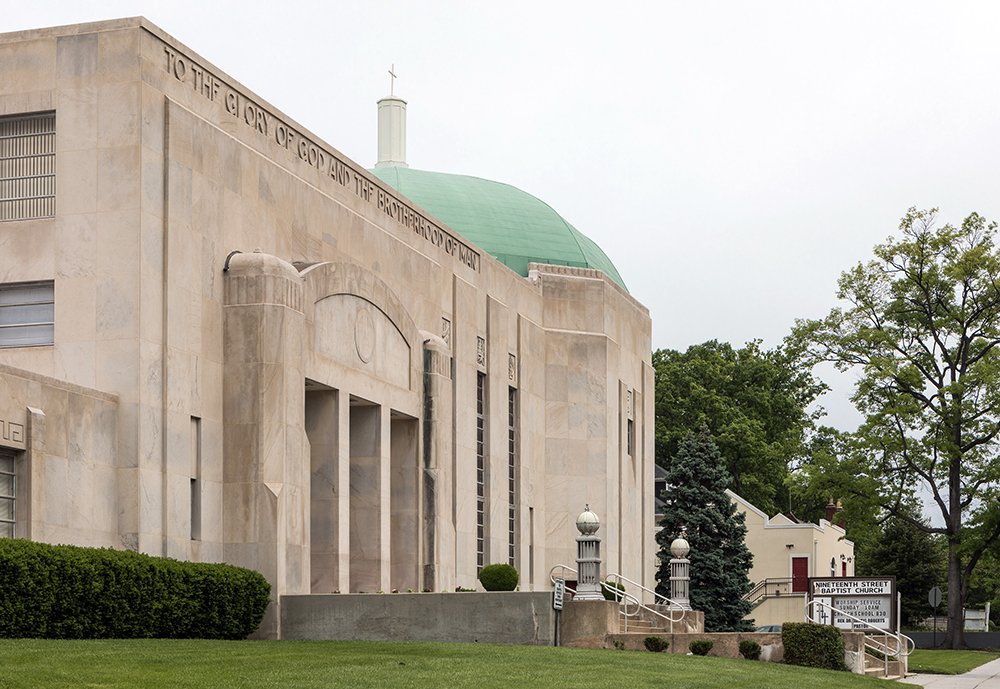 The photo project led to a range of depictions of religious buildings, from churches with august columns and stained-glass windows to a synagogue with the Ten Commandments above its entrance to a Buddhist temple with distinctive red roofs.

Around 50 houses of worship line the 6 1/2-mile road, meaning they make up about a tenth of religious sanctuaries in the nation’s capital, which a local historian estimates has some 500 churches.

“Particularly in the upper part of the street, there are what were originally built as residences that have been transformed into houses of worship,” said John DeFerrari, co-author of a pending book on 16th Street and author of three other books on D.C. history. “The big push for lots of churches coming on the street started in the 1920s.”

DeFerrari said there are several factors that led to 16th Street being known as “the avenue of churches,” including its central location, its mostly noncommercial properties and its prestige as a direct path north from the White House. 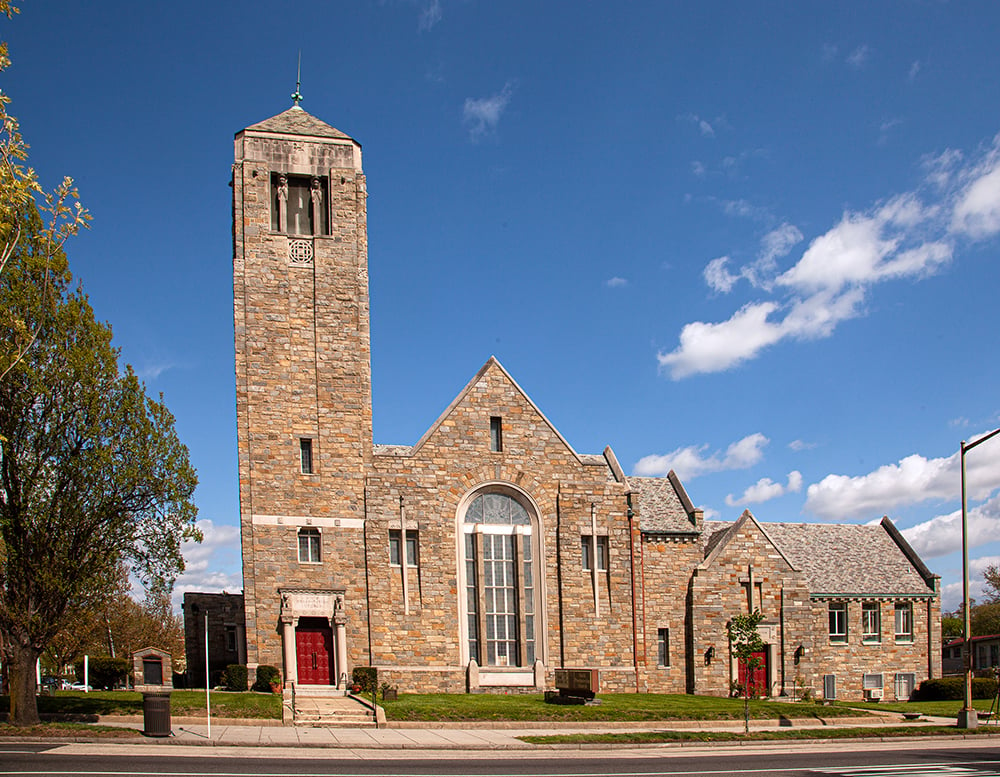 “There have been a number (of instances) of one religion buying another religion’s property,” Hoffman said of buildings that have changed hands, names and faith affiliations.

DeFerrari said some of those changes were due to white flight — with Black churches gaining buildings as white Washingtonians moved to the suburbs — as well as other forms of discrimination. In one instance, a building now owned by the Unification Church was first used by a congregation of the Church of Jesus Christ of Latter-day Saints, but only with the initiative of Mary Henderson, a wealthy heiress who once lived on and controlled much of the property on 16th Street.

“She ignored advice that it would be bad to have Mormons on 16th Street, and she sold them the property anyway because she thought they should have it,” said DeFerrari. 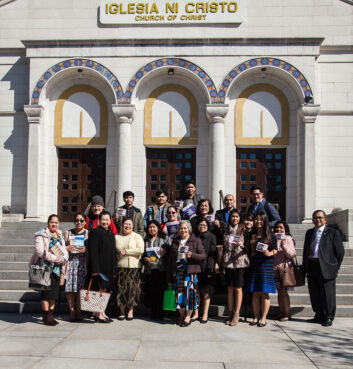 The photographers, for their part, found a welcoming spirit among several of the houses of worship whose members became aware of their outdoor camerawork.

At Iglesia Ni Cristo, Church of Christ, on the street’s east side, they unexpectedly became part of their own photo shoot. More than a dozen people were gathered outside preparing to go on a retreat when the photographers arrived to make the church part of their project.

“They actually required us to take a picture of them and then with them,” Hoffman said. “We had to be in the picture with them.”

A group shot in front of the church’s arched doorways stands out among the many photos in the collection, which mostly includes houses and houses of worship but few humans.

Sewall and Hoffman did face some challenges, such as having to explain to some why they wanted to take photos on what was often a sacred day for building occupants. It was also difficult to capture entire edifices, some with steeples.

“They’re very tall buildings, and sometimes it’s hard to get the whole darned building into the picture,” said Sewall. “You have to shoot across the street, and when you do that, you got to wait for gaps in traffic or the bottom third of your picture is just going to be car roofs. So there was a lot of waiting it out.” 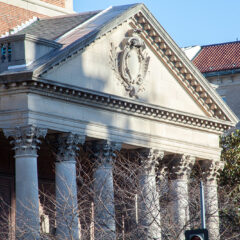 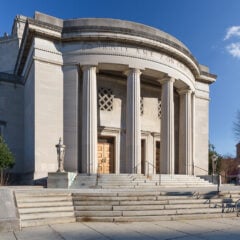 The project, which began at one church, ended at another: St. John’s Episcopal Church, the oldest church on the street, dating to 1816. As with most of the other edifices in the collection, Sewall and Hoffman each have included at least one image of the yellow church with white columns that is located across Lafayette Square from the White House.

Even after completing their last 2 1/2-hour photo shoot, the men continued another ground rule of their project before their trek home.

“Then we go get a bagel,” said Sewall, laughing with his photography partner. “Sesame with cream cheese, toasted.” 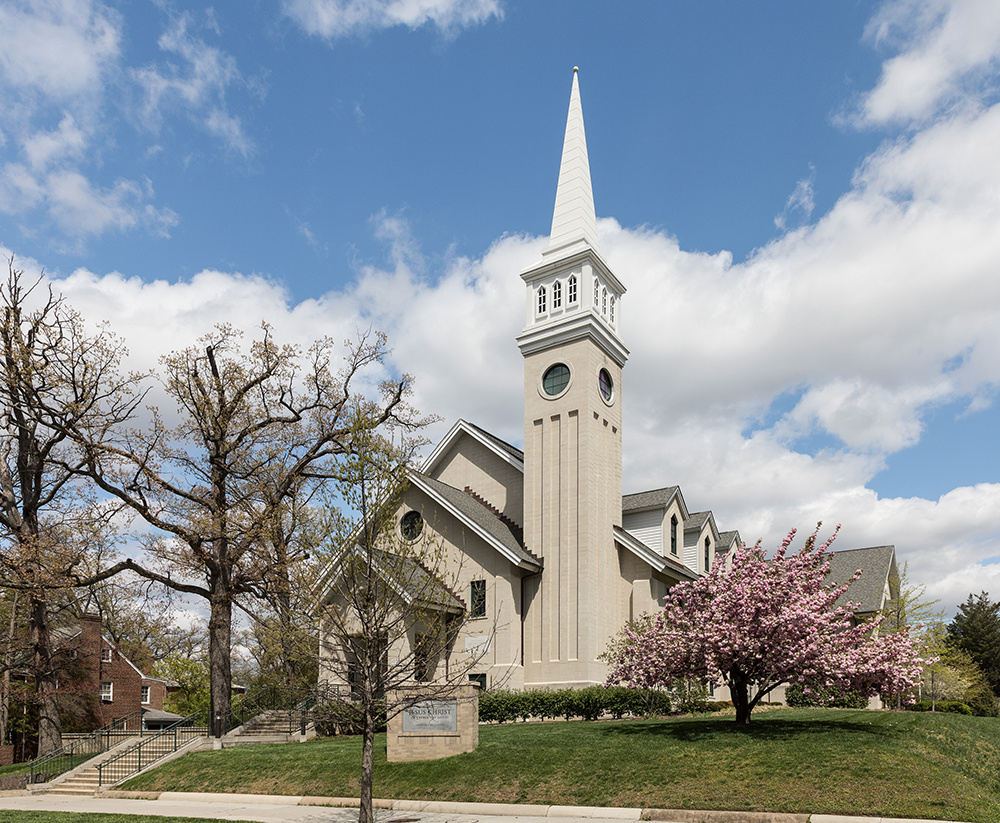 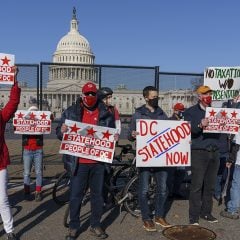