(RNS) — There’s a preacher in the house — or at least, in the Senate. “A vote is a kind of prayer — to God.” That’s what Sen. Raphael Warnock, Georgia’s first Black senator, said in his first floor speech in the Senate chamber.

Warnock is also senior pastor at the historic Ebenezer Baptist Church in Atlanta, where Dr. Martin Luther King Jr. once served. As Warnock made clear, voting rights is not just a political issue. It is also a faith issue — a spiritual test of whether we see in others the image of God, and thus extend the respect and dignity of a fair and free vote.

The sacredness of the vote is under attack by the Republican Party, whose members have decided that the only way they can win future elections is by making it much harder for some people to vote — specifically targeting voters who are Black, brown and young, i.e., those most likely to vote against them.

Unable to attract diverse new voters by embracing a multiracial and multicultural democracy, the Republican Party has resorted to passing pre-civil rights movement-style voter restriction and suppression laws. Unable to prove the existence of voter fraud in the 2020 election, even in courts run by conservative judges, the party now deceptively buries Jim Crow-type voter obstruction laws under the obvious lie of voter integrity.

Many white evangelicals, along with other white Christians, have embraced this all-out assault on American democracy and the imago dei, the image of God, which gives inherent value, worth and dignity to each person.

The political battle that lies before us is also a battle for those who profess Christian faith, especially white evangelicals. Their complicity in the racialized attacks on the vote could continue to erode the number of Americans attracted to Christianity. Today, 26% of Americans identify as “nones” — or religiously unaffiliated — and the percentage of Americans identifying as Christians has rapidly diminished, according to Pew research.

This could become a moment when white evangelicals — so complicit in this country’s history of racism, rooted in dehumanizing practices and laws that denied full citizenship to Black, Latinx, Indigenous and Asian people to this very day — decide to reconsider their historic allegiances in light of their faith.

We are seeing GOP efforts all over the country to restrict voting rights, and these efforts have been turbocharged by the 2020 election and former President Donald Trump’s continuous false claims of election fraud. Republicans have put forward more than 250 new Jim Crow-type laws in 43 states. These would limit voter registration, voting by mail, early in-person voting and eliminate most Sunday voting — a direct attack on Black churches and their effective “Souls to the Polls” Sunday voting campaigns. Some of these laws would impose more stringent standards for what constitutes voter ID.

Of course, many of these will have a disproportionate effect on nonwhite Americans. One such draconian measure proposed in Georgia would prevent the simple act of giving voters food and water in long lines — even while the state’s Republican Party is trying to make lines even longer by making it more difficult to vote by mail or drop off an absentee ballot. No one claiming to be a follower of Jesus, or friend of the oppressed, should ever want to be identified with such un-Christ-like actions.

RELATED: In Sunday sermon, Warnock, now senator and pastor, said he heard ‘echoes of the spirit’ in swearings-in

Stacey Abrams, whose run for Georgia governor in 2018 and subsequent work registering the state’s voters were both instrumental in the Joe Biden, Warnock, and Jon Ossoff victories there, had some pointed words about these kinds of actions. 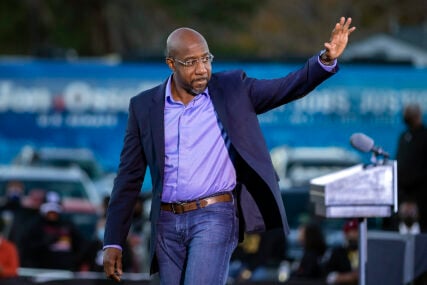 Voting security did not motivate these changes. In fact, the secretary of state and the governor went to great pains to assure America that Georgia’s elections were secure. The only connection we can find is that more people of color voted, and it changed the outcome of elections in a direction that Republicans do not like.

Warnock put it succinctly in his floor speech, this is “Jim Crow in new clothes.”

In the House, U.S. Rep. Jim Clyburn shared Warnock’s assessment: “There’s no way under the sun that in 2021 that we are going to allow the filibuster to be used to deny voting rights,” he said. “… Here we are talking about the Voting Rights Act (U.S. Rep. John Lewis) worked so hard for and that’s named in his honor and they’re going to filibuster it to death? That ain’t gonna happen.”

H.R. 1, the For the People Act, would mandate automatic voter registration nationwide, at least 15 days of early voting, same-day registration and many other measures that would make it easier and more convenient for more people to exercise their right to vote. It would also set up nonpartisan redistricting commissions across the country and require political action committees to publicly disclose their donors.

The complementary bill that Congress should pass without delay is the John Lewis Voting Rights Advancement Act, which aims to restore the federal safeguards against discrimination that were gutted by the infamous 2013 Supreme Court decision in Shelby v. Holder.

Support for these measures offers a chance for white evangelicals and all white Christians to stand with Black, Latino, Indigenous and Asian Americans’ unrestricted right to vote. The bill provides the tools to address discriminatory practices and creates a new formula for assessing voting discrimination — based on the findings of repeated violations in the preceding 25 years — that would apply to all states.

It’s important to note that previous attempts to strengthen the 1965 Voting Rights Act have been passed with both Democratic and Republican votes. Republicans have a choice to make about what kind of party they want to be. They can share a vision for the nation embracing economic and social policies that uplift opportunity for all Americans, which could attract people of different racial backgrounds to their vision. Or they can continue to be the party of white supremacy, standing in the doorway of full voting rights by blocking taxpaying citizens from exercising their full citizenship rights.

RELATED: Warnock, pastor and politician, has role models who did both

White Christians face a similar choice: They can continue to support white supremacy by violating and assaulting God’s image in brothers and sisters of color who are seeking to exercise the same rights of citizenship that white citizens exercise. Or, they can reclaim Jesus and his commitment to the evangel and begin anew as the proclaimers of good news.

We envision a faith-based and gospel-inspired movement for voting rights in the weeks and months ahead. Democracy is at stake, even for the elections coming soon in 2022. But we believe that faith is also at stake, as is the future of the American churches.

This is indeed a choice between repentance in white churches or once again failing our commitments to love our neighbor as Christ commands us. Because you cannot obey Jesus’ commandment to love your neighbor if you are not willing to protect your neighbor’s right to vote, no matter your neighbor’s political beliefs or the color of their skin.

(Jim Wallis is founder and ambassador of Sojourners. His book “Christ in Crisis: Why We Need to Reclaim Jesus” is available in paperback. Follow Jim on Twitter @JimWallis. The views expressed in this commentary do not necessarily reflect those of Religion News Service.)