NAIROBI, Kenya (RNS) — Calls for the release of Mubarak Bala, a Nigerian atheist and humanist leader jailed for allegedly insulting Prophet Muhammad on Facebook, have mounted as the anniversary of his arrest passed on Wednesday (April 28). Humanist groups say his detention is a violation of Bala’s right to freedom of belief and expression.

Bala was detained on April 28, 2020, after a law firm in Kano, a majority Muslim state in northern Nigeria, petitioned the Kano commissioner of police, alleging that Bala had posted articles that provoked and annoyed Muslims.

The 37-year-old Bala, who recanted his Muslim faith in 2014, has since faced numerous death threats and harassment, according to Humanists International.

“(We) write to you (governor of Kano) to express our deep concern regarding the ongoing detention of Mubarak Bala, the President of the Humanist Association of Nigeria, who has arbitrarily been detained for 365 days. We urge you to immediately and unconditionally release Mr. Bala,” said Humanist International leaders from Africa, Asia, Europe and the United States in a petition to the governor of Kano.

According to the organization, the arrest violated due process since he has not been formally charged. The petition also pointed out that a federal high court judge in Abuja, the Nigerian capital, had declared Bala’s continued detention illegal and ordered his immediate release.

“The undersigned organizations fear that Mr. Bala is being targeted solely for his rights of freedom of belief and freedom of expression, as enshrined in the Nigerian Constitution and international and regional instruments Nigeria has signed,” said the organization.

Agwadu Lhebade, vice president of the Atheist Society in Nigeria, said Bala had committed no crime but was exercising his freedom of speech.

“He had the right to express his opinion on issues of interest and religion is no exception. While in detention, Bala received numerous death threats from religious zealots,” said Lhebade. In 2018, the ASN said it had a membership of 5,000.

Bala, a chemical engineer, was born in Kano in 1984. Sixteen years later, the state adopted Shariah law and installed an Islamic police force called the Hisbah.

Nigeria’s population of 204 million is nearly evenly split between Christians (49.3%) and Muslims (48.8%), with 2% claiming other religions or none, according to a 2012 survey by Pew Research Center’s Forum on Religion and Public Life.

“Blasphemy is not a crime, and should never be criminalized,” Harrison Mumia, president of the Atheists in Kenya Society, told Religion News Service. “The issue of Mubarak Bala has morphed into a human rights issue. … Many atheists in Africa are being emboldened to come out of the closet as a result of this continued injustice.”

On Wednesday, a United Nations human rights panel demanded that Bala be freed, expressing disappointment that their earlier appeals had been ignored. According to the panel, Bala had led human rights education campaigns promoting freedom of religion or belief and worked to raise awareness about religious extremism.

“Through his continued detention, the government is sending the wrong signal to extremism groups that silencing and intimidation of human rights defenders and minority non-believers is unacceptable,” said the panel.

Bala’s detention is being compared to that of Mariam Ibrahim Yahya Ishag, a Sudanese woman who was arrested and released after being charged with apostasy after a relative complained about her marriage to a Christian. Though she had been raised in her mother’s Christian faith, her father was a Muslim.

When Bala renounced Islam, his family reacted with shock. They beat him and took him to a hospital for psychiatric examination. The doctor at the hospital later discharged him, saying he was sane and normal.

Meanwhile, leaders of atheist groups in Africa say his detention and harassment are drawing attention to their growing numbers on the continent.

“There is an increased awareness on atheism as an ideology worldwide,” said Mumia, adding that Bala had now become a symbol of oppression of nonbelievers. 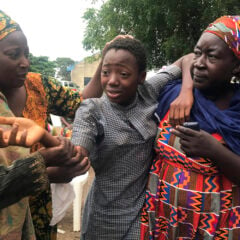