(RNS) — Many of North Carolina’s prominent clergy have called for police reform and accountability in the wake of George Floyd’s killing by former Minneapolis police Officer Derek Chauvin.

But the killing of Andrew Brown Jr., a 42-year-old man shot and killed by sheriff’s deputies in eastern North Carolina’s Elizabeth City, a town of 18,000 people on the bend of the Pasquotank River, is personal.

Brown died of multiple gunshot wounds — at least one to the back of the head — on April 21, as deputies served a warrant for drug charges. Coming one day after former Minneapolis police Officer Derek Chauvin was found guilty of second-degree murder of Floyd, Brown’s killing brought out deeper cries for justice from the state’s top religious leaders. His funeral will be held Monday (May 3).

Brown’s death served as a stark reminder that Chauvin’s conviction is not enough to reform a persistent pattern of unarmed Black people dying at the hands of law enforcement.

In North Carolina, where Blacks constitute 21% of the population but are twice as likely as whites to die at the hands of law enforcement, according to a project called Mapping Police Violence, the killing of Brown has stoked a renewed passion for change.

And no one has expressed as much pain and indignation at the killing as civil rights leader the Rev. William J. Barber II, co- chair of the Poor People’s Campaign: A National Call for Moral Revival.

Barber grew up in Washington County, 50 miles south of where Brown was killed. His parents’ lifelong mission was to desegregate the public schools in the region, which resisted desegregation until well into the late 1960s and early 1970s.

During a press conference with the president of the North Carolina conference of the NAACP earlier this week, Barber repeatedly called District Attorney Andrew Womble and Pasquotank County Sheriff Tommy Wooten “inept, incompetent and incapable.”

On Wednesday, a judge said he would not consider releasing body-cam images for at least another month while the state conducts its investigation. 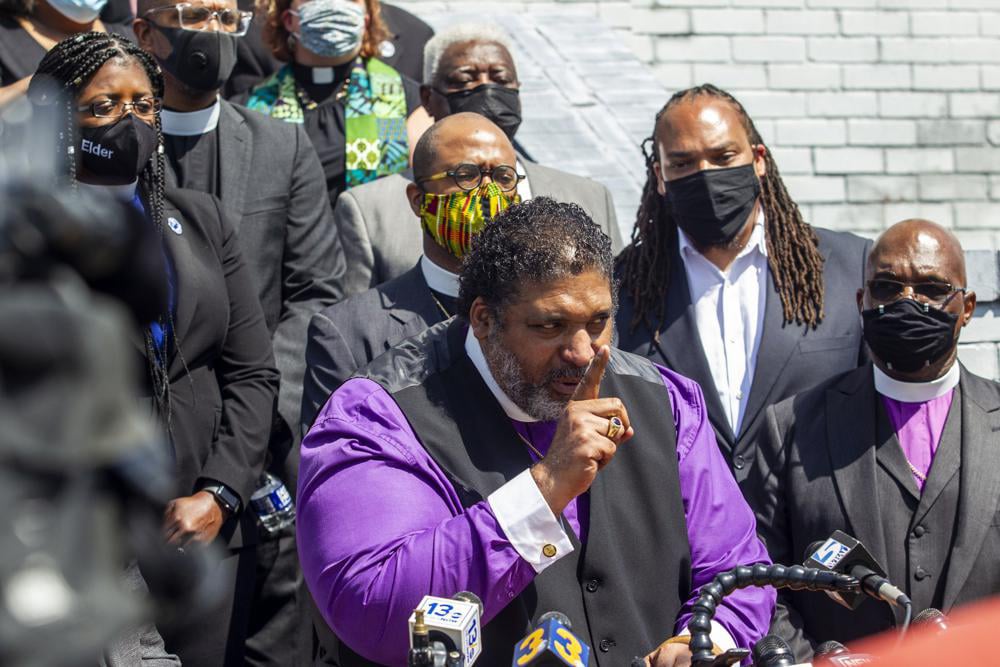 Barber and other clergy are demanding the full release of body-cam video of the killing and for the case to be handed over to North Carolina’s attorney general. The family of Brown, which has seen a short snippet of the video, has called his killing “an execution.” (An autopsy showed Brown was shot five times.)

“A warrant is not a license to kill, even if a suspect supposedly drives away,” Barber said. “A warrant does not mean a person is guilty. A warrant is not permission to shoot someone, possibly with assault rifles, multiple times.“

A coalition called Justice for the Next Generation, led by the Rev. Greg Drumwright,  protested Sunday at the Elizabeth City Courthouse.

In Elizabeth City, where Blacks make up 48% of the population, a march through the city earlier this week drew several clergy leaders. Those included the bishop of the North Carolina Conference of the United Methodist Church, the presbyter of the Presbytery of New Hope and the presiding bishop of the Eastern North Carolina Episcopal District of the AME-Zion Church.

“What I see this time around is, ‘Oh, my gosh, now it happened here, too,’” said the Rev. Jennifer Copeland, executive director of the North Carolina Council of Churches. “When it happens in your backyard you pay more attention to it and you get a little more involved in the different actions occurring. I do believe that’s happening.”

The council is planning a vigil on May 6.

Barber, who has made numerous visits to Elizabeth City, has reminded people of the South’s stumbling efforts to overcome a legacy of racism. He said he could count at least five Black men from Eastern North Carolina who were wrongly accused of murder and later exonerated. To this day, people of color are underrepresented in the court system, the judicial system and the police department.

“This is where I was raised,” Barber told RNS. “It brought back: Why am I 58 years old and still having to see and deal with what my father dealt with when I was 12 and 13 years old?”

Barber will deliver what he called “words of comfort” to the family during Monday’s private funeral for Brown at Fountain of Life Church in Elizabeth City. The Rev. Al Sharpton will deliver the eulogy.

A visitation for family and friends took place Sunday.

Elizabeth City has seen nights of street protests and the imposition of overnight curfews as people from the state and beyond have marched on the city to demand racial justice.

Barber and other clergy are planning another press conference next week.