(RNS) — If you ever doubted the remarkable appeal of the Netflix series “Shtisel,” consider this.

There is now a Facebook group that has devoted itself to ongoing discussions of the series, of which I am a member. A college friend invited me to join it.

He is an Irish Catholic.

He is not alone. There are many non-Jews who are “Shtisel”-maniacs. It testifies to the universal appeal of this story that happens to be about Haredi (so-called “black hat,” or “ultra-Orthodox”) Jews in Jerusalem.

Interest in the Haredim is not limited to a fictional story. It is also central to the story of what happened this past week at Mount Meron, the horrific tragedy of 45 deaths in a stampede at a religious festival.

Yesterday, someone asked a question online: “To whom is Uncle Nuchem referring when he speaks of ‘the evil doers?'”

The answer: Uncle Nuchem, who is my least favorite character in the series, is referring to Zionists. He hates them, and he hates Zionism.

He is not the only anti-Zionist on the show. Recall the episode when Shulem forbids his students from watching the Israeli air force’s air show on Israel Independence Day.

Let us understand the complexion of Haredi anti-Zionism.

The Haredim believe that a secular state is an abomination. They believe that only the Messiah, as the descendant of King David, can restore Jewish sovereignty in the land of Israel.

They have no interest in the state of Israel. True — they live there, but in fact, that is a mere geographical fact. In reality, they “live” not in Jerusalem, but in Vilna or other cities of Eastern Europe.

It can get quite extreme, and it can get quite ugly. Consider Neturei Karta. This is a radically anti-Zionist Haredi sect, which actually advocates the dismantling of the state of Israel.

So much so that they have demonstrated with anti-Israel activists at various conferences, have made common cause with Iran and have trafficked with Holocaust deniers.

So, why are the Haredim anti-Zionist? Is it only about their view that only the Messiah can bring about a return to national politics?

It is actually far deeper than that.

First, the Haredim are anti-Zionist because statecraft is a distraction from “real” religion.

Running a state means worrying about taxes, sewers, roads etc. It is a waste of time. Better to focus on studying the sacred texts, which means Talmud.

A memory: More than 50 years ago, during the Six Day War, my parents got me a poster of SuperJew, a religious Jew emerging from a phone booth. It was about Jewish power.

Except: When we looked at the poster carefully, we noticed that the SuperJew had dirty hands.

And might even be giving a middle finger to the world.

This was either an evocation of the “dirty Jew,” or the realization that when you fight a war and run a state, your hands do get dirty, and/or it might seem like you are giving a middle finger to the world. 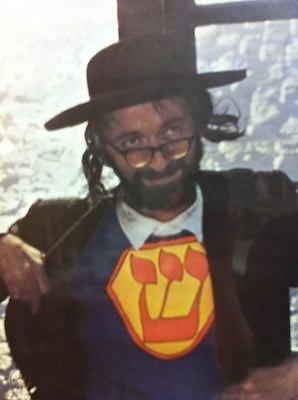 Which leads to my second point.

At its core, their anti-Zionism is a sanctification of Jewish weakness and passivity.

Consider the famous Talmudic passage about “the three oaths.”

Let me paraphrase it for you from Talmud, Ketubot 110a.

It teaches that after the Romans destroyed Jewish sovereignty, God demanded two oaths from the Jews and one from the nations of the world.

And, from the nations of the world?

That they would not oppress Israel too much.

In other words: The Jews should know their place. The gentiles should not make our lives too difficult.

Perhaps this is where we got the “nice Jewish boy” thing.

Why? Because someone once taught that a firm handshake derives from European chivalry. Therefore, it was “treif” for pious Jewish men to shake hands with a firm handshake. Power — physical, earthly, state-sponsored — is simply wrong.

The “three oaths” teaching has played a role in my own understanding of Zionism.

But, I play it differently.

Between the first century CE, when the Romans destroyed Judean sovereignty and November 1938, we all agreed to our oaths.

“They” weren’t overly mean to us. Yes, “they” expelled us from various countries, but we were able to rebuild our lives. We could survive.

But, November 1938 trashed the old system. With Kristallnacht, and the ensuing Shoah, “they” persecuted us too much.

Therefore, the nations of the world broke their oath.

All bets were off.

Therefore, the Shoah released the Jews from their oaths.

Of course, in its extreme, this attitude could seem to give carte blanche to a militant and overly aggressive attitude.

Which, in some quarters, it has done. The state of Israel has presented Jews with a question that we could not have imagined even 70 years ago: How do we handle military and state-sponsored power?

But, let us be clear.

Jewish weakness has not been such a bargain, either.

I turn to the late, lamented Israeli author and public intellectual, Amos Oz.

I would be more than happy to live in a world composed of dozens of civilizations: no flag, no emblem, no passport, no anthem. No nothing. Only spiritual civilizations tied somehow to their lands, without the tools of statehood and without the instruments of war.

But the Jewish people has already staged a long-running one-man show of that sort. The international audience sometimes applauded, sometimes threw stones, and occasionally slaughtered the actor. No one joined us; no one copied the model the Jews were forced to sustain for two thousand years, the model of a civilization without the “tools of statehood.” For me this drama ended with the murder of Europe’s Jews by Hitler.

Such is the anti-Zionism of the Haredim — and yes, of many “modern” Jews as well, who prefer a “Kumbaya” vision of the world without countries and without the necessity of power.

I might want to live in an imagined world wherein Jews no longer need power.

But (and this is crucial):

That world does not exist. At least, not yet.