(RNS) — Seventeen professional psychological societies have signed a statement asking the U.S. Department of Education to protect LGBTQ students at religious colleges and universities from discrimination.

The statement comes in response to a class-action lawsuit on behalf of 33 students or former students of federally funded Christian colleges and universities that allege widespread discrimination against LGBTQ students, including bullying and harassment.

“Decades of psychological research has consistently found that discrimination toward LGBTQ+ people is harmful, and can result in increased rates of suicide, mental health symptoms, substance abuse, isolation, and lower academic achievement in school settings,” the statement said.

It calls on the Department of Education to investigate allegations of harm and to take appropriate actions to protect LGBTQ students.

The statement was organized by Joshua Wolff, a clinical psychologist and professor at Adler University in Chicago.

“It’s aimed at colleges that say being LGBTQ is a sin and that take a non-affirming theological position on (sexual) identities and relational statuses,” Wolff said. 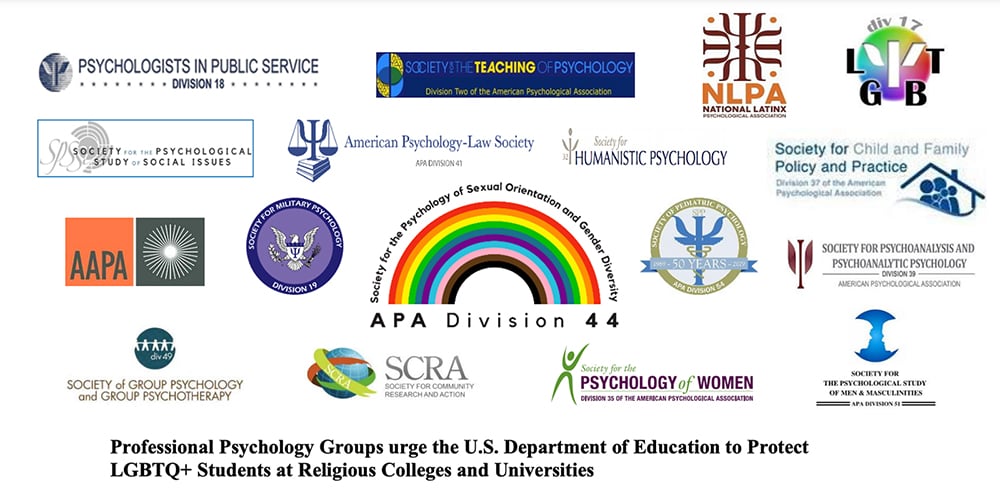 Logos of groups participating in a statement to the U.S. Dept. of Education. Courtesy image

Filed in March by the nonprofit Religious Exemption Accountability Project, the lawsuit alleges LGBTQ students at 25 Christian colleges and universities were forced to attend conversion therapy, prohibited from dating people of the same sex, disciplined for social media posts, denied on-campus housing and, in one case, blocked access to affirming LGBTQ websites and resources on the campus internet.

These schools affirm a traditional view of Christianity that does not recognize sexuality outside of heterosexual marriage. Some require students to sign conduct codes forbidding same-sex dating.

Most of the schools receive federal funding in the form of student loans and research grants, but they are allowed religious exemptions to Title IX’s protections for LGBTQ students. The Religious Exemption Accountability Project counts 200 religious colleges and universities that discriminate against LGBTQ students.

The statement acknowledges the importance of religious expression and notes religion and spirituality are important to the lives of LGBTQ people. But it calls upon the Department of Education to recognize religious freedom without ignoring harmful practices and policies directed at LGBTQ students.