(RNS) — On Pentecost Sunday, some members of Southwood Lutheran Church in Lincoln, Nebraska, sang hymns without masks for the first time in more than a year.

They vocalized “Multilingual Grace” in four languages after music director Denise Makinson taught them how to express thanks in Spanish, Arabic, Swahili and Korean.

“I do have to say it was quite emotional yesterday to hear the congregation singing
all the hymns,” Makinson said in an interview on Monday (May 24). “It was definitely something I missed.”

Pentecost is often celebrated as the “birthday” of the Christian church. It frequently includes a reading from the New Testament Book of Acts about the Holy Spirit descending on Jesus’ followers, who then begin to speak and understand languages they had not known. “I think they were also emotional about it, to hear people’s voices,” Makinson said of Southwood’s congregants.

Some people sang with masks on, others with them off — a mix that is likely to continue across the country for a while as congregations navigate the “new normal” of the continuing pandemic when not everyone is vaccinated.

The Centers for Disease Control and Prevention’s recent announcement that fully vaccinated people could generally resume pre-pandemic activities has played a part in new decisions by congregations. But the CDC’s guidance was about individuals; its advice for “communities of faith” has not been updated since Feb. 19 and currently does not mention singing.

The Hymn Society’s Center for Congregational Song has declared in its own latest guidance: “We do not currently recommend that congregations sing.”

Its May 20 blog post also included questions that might further guide congregations about higher- or lower-risk activities. They covered such topics as the percentage of fully vaccinated congregants, the chances of some congregants remaining unmasked and not distanced, and whether people wear their masks properly.

But it added, no matter how those questions are answered, “there is still risk.”

Brian Hehn, director of the center, said it’s been difficult to know how to instruct churches at this time.

“There are so many factors that go into determining whether or not it’s safe that it’s really hard to advise people and it’s also hard for them to make a decision,” he said.

He noted air exchange rates as an example of one factor religious leaders must consider as they try to gauge the best way to reduce the movement of aerosols in the air of a sanctuary. Scientists have found singing could expel aerosolized virus particles more than speaking can.

“Most people have no idea what their air exchange rate is, so you have to contact your air conditioning company and do research on what kind of system you have and how it was installed and whether it’s filtered,” Hehn said. The Rev. Ed Phillips, co-convenor of the Ecumenical Consultation on Protocols for Worship, Fellowship, and Sacrament, said his organization is also coming down on the side of caution, urging mask-wearing indoors for “any sort of congregational responses or singing that would cause us to use a loud voice or sustained singing voice.”

He said “restrictions are much less necessary” for outdoor worship.

“Our guidance around singing at this point is to take a relatively conservative approach because congregations tend to be multigenerational gatherings and also gatherings where we will have both vaccinated and unvaccinated people, possibly of differing ages,” said Phillips, associate professor of historical theology and Christian worship at Emory University’s Candler School of Theology.

The group, which has consulted with the CDC, plans to officially release its final guidance in English, followed by a version in Spanish, in June.

Phillips said the consultation advises congregation leaders to use websites such as covidactnow.org to keep tabs on the latest information about the pandemic, along with advice from their local health officials, to determine what is considered safer in their particular situation. 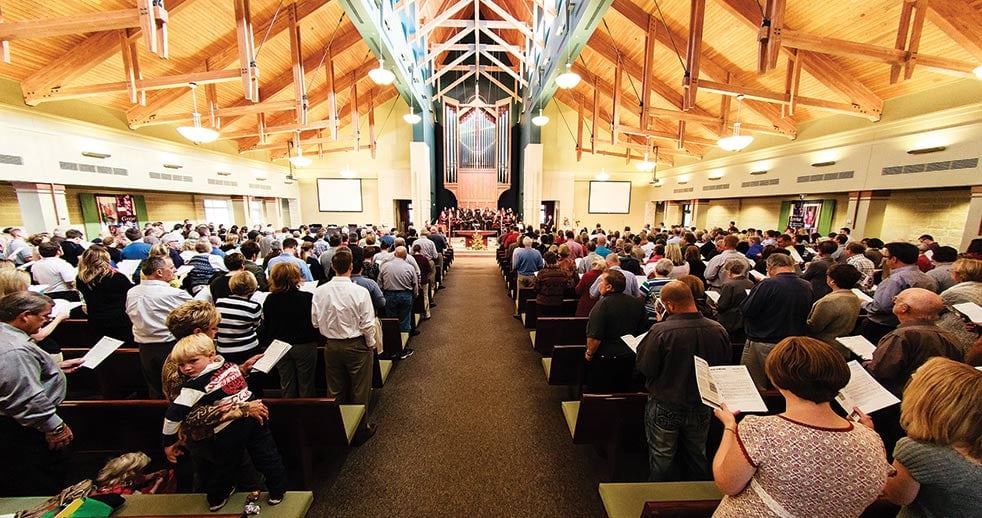 Southwood Lutheran Church members join the choir in song during a pre-COVID worship. During the pandemic, the choir has been unable to perform live until late May.

Makinson, of the Nebraska church, said her congregation’s loosening of mask restrictions for congregational singing came on the first Sunday after a mask mandate in her community expired.

With about 200 people at each of the three services, she said it was fitting that some masks came off and singing could be heard more fully on Pentecost Sunday.

“We were definitely hoping the Spirit was present and protecting everyone,” she said.