(RNS) — When she suited up in cap and gown to accept her diploma from Calvin University last month, Claire Murashima felt proud of her bachelor’s degree in marketing management.

But to Murashima and to many of her fellow graduates, her more singular and unexpected achievement was having navigated her senior year while serving as the first openly gay student body president in the history of the landmark Christian university in Grand Rapids, Michigan.

The raven-haired 22-year-old, who grew up attending evangelical churches in California and North Carolina and identifies as queer or bisexual, filled her post at the 145-year-old school by taking principled stands about her sexual orientation, while maintaining — or at least seeking — the respect of her mostly straight peers and elders.

“I wasn’t trying to do anything revolutionary or harmful to Calvin,” said Murashima. “I mainly came out so people could look to me and know they didn’t have to give up their faith if they’re in the LGBTQ community.”

Calvin is affiliated with the Christian Reformed Church, a small denomination that holds that “homosexual practice … is incompatible with obedience to the will of God as revealed in Scripture.” Same-sex orientation in and of itself, however, is not a sin, and Murashima made a personal decision not to date women or have sex the year she was student body president.

The school, named after John Calvin, the 16th-century Protestant Reformer, let her be. While other Christian schools may have found a cause for dismissal, Murashima was not censured, disciplined or otherwise harassed for coming out.

“For a CCCU institution, Calvin is relatively welcoming,” said Joseph Kuilema, an assistant professor of sociology and social work who taught Murashima this past year, referring to the Council for Christian Colleges and Universities, an umbrella group. But he added the university still had work to do to be fully welcoming.

A rough estimate puts the number of LGBTQ students attending Christian universities in the U.S. at about 100,000. The schools that make up the CCCU share a traditional Christian view of marriage as between a man and a woman. None of the schools allow LGBTQ people as full-time faculty or staff, and aside from Murashima, few, if any, LGBTQ students at the 180 CCCU schools have risen to positions of leadership.

In March, 33 LGBTQ students or former students at federally funded Christian colleges and universities filed a class-action lawsuit against the U.S. Department of Education. In it, they claim the department’s religious exemption allows schools that receive federal dollars to unconstitutionally discriminate against LGBTQ students. Only about half recognize LGBTQ alliance groups on campus.

Calvin’s LGBTQ affinity group, called SAGA (Sexuality and Gender Awareness), is vibrant, and the LGBTQ community also holds a regular Bible study. Calvin students were not among the 33 named in the class-action lawsuit against the Department of Education.

“I think a lot of what Calvin excels at is starting conversations,” said Joseph Newton, 23, a student who identifies as nonbinary and queer. “It’s invested in the well-being of its students. It’s listening to their concerns.”

That doesn’t mean being an LGBTQ student at Calvin is easy. At least, it wasn’t for Murashima. 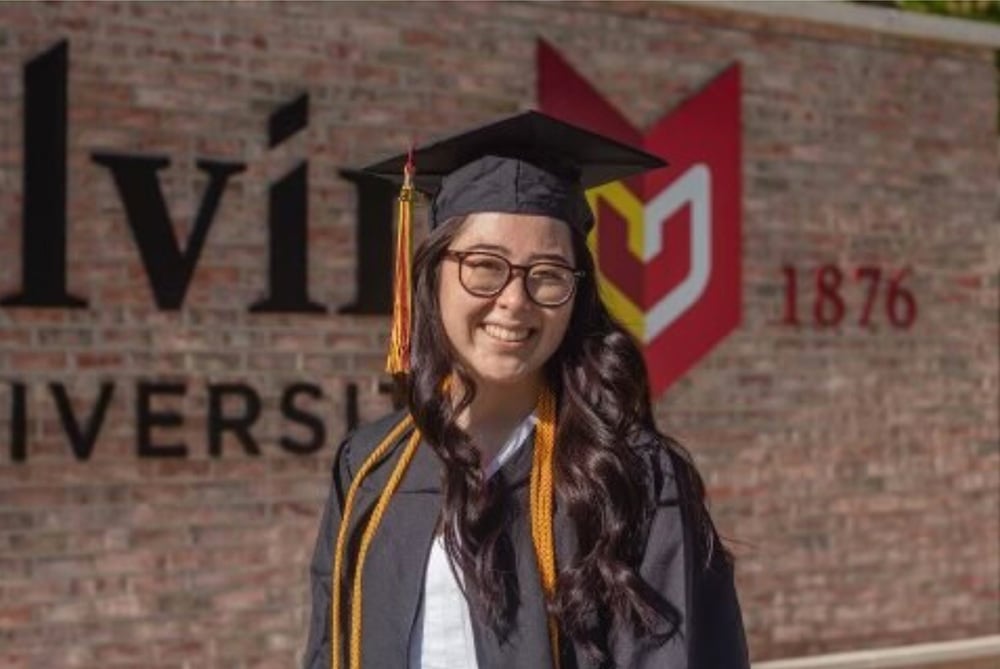 Claire Murashima after graduating from Calvin University in May. Courtesy photo by Darian Seale

She arrived on campus from North Carolina proud of her Dutch Reformed ancestry on her mother’s side and her family’s legacy at Calvin: Her mother, uncle and grandparents all attended. At nondenominational Chapel Hill Bible Church, she was active in the congregation’s youth group and participated in four mission trips.

Adjusting to a more conservative environment, as well as Grand Rapids’ cold and gray winters, was difficult. She also struggled to reconcile her love for a fellow female student and her Christian faith that saw homosexuality as sinful.

“I was pretty depressed my freshman and sophomore years,” Murashima said. “I didn’t have a solid group of friends. I was grappling with my sexuality all alone. I kept breaking up and getting back together with a girl.” (The two are now friends.)

But she had served on the school’s student senate and had found a passion for social justice. One of her proudest achievements was getting the university to start an annual dance marathon to raise money for a local children’s hospital.

The coronavirus pandemic hit while she was on an internship at the American Enterprise Institute, a Washington, D.C., think tank, and she found herself with time on her hands. She decided to spend it launching a campaign for student body president.

She won the election on May 8, 2020. By then, Murashima knew she was gay and had already come out to her mother and one of her roommates. But she was not active in the LGBTQ group on campus and had made a strategic decision not to come out publicly until after the vote.

“I wanted to work within the system,” she said. “I didn’t want to run the place down.”

As the fall semester started, she drafted an opinion piece for Chimes, the student newspaper, declaring her sexual orientation. She knew she was walking a tightrope and she solicited feedback, sharing her draft with 13 people, including the university president, several deans, professors and a chaplain.

“I didn’t want to catch anyone off guard,” she said. “I wanted to share my story and not undermine them. My question was not, ‘Should I do this?’ but ‘How should I do this?’”

“In the 102 years that Student Senate has existed, we’ve never had an openly gay student body president,” she wrote. “I’m proud to be the first.”

The response was mostly positive. Some professors and students reiterated their views that the Scriptures forbid sex outside of heterosexual marriage, but the discourse was mostly polite. A professor who holds to a traditional view of sexuality even invited her to his home for dinner.

Over the course of the school year she worked hard, she said, to prove to Calvin’s more conservative students she could follow God, be gay and lead well.

She avoided hot-button words like “homophobia” or “discrimination,” and tried her best to listen and give people of different views opportunities to be heard.

Her tenure coincided with a debate within the Christian Reformed Church over whether its sexuality teaching should be elevated to the authority of a confession or church doctrine. The issue will be debated at next year’s meeting of the church’s synod, or governing body.

The CRC has no openly gay clergy. Recently a Christian Reformed Church in Grand Rapids appointed a person in a same-sex marriage to the position of deacon or lay leader — a first in the denomination of about 210,000 members.

In March, a group of conservative students set out a table on campus with a banner that read “LGBTQ is sin.” The university responded by saying the students did not have permission for the table or the banner. The incident was mostly notable for the hundreds of students who organized a silent protest in response.

Murashima is still figuring out her future. She’s planning on moving to Washington in the fall, perhaps to pursue journalism. She’s comfortable holding onto the tension between her faith and her sexuality and will be looking for a new church home.

“I don’t have my life all figured out and it’s good not to,” she said, “because I find God when I’m asking a question.”

Opinion
Christian educators: Don’t be afraid of ChatGPT
Follow us on Facebook!
Submit your photos to RNS