(RNS) — U.S. Catholic bishops are “deeply saddened” by the recent confirmation of hundreds of unmarked graves on the grounds of two former residential schools for Indigenous children in Canada, according to a written statement by U.S. Conference of Catholic Bishops spokesperson Chieko Noguchi.

Bishops are also “following closely” the U.S. Department of the Interior’s inquiry into what were known as Indian boarding schools in the United States and have pledged to “look for ways to be of assistance,” according to the statement shared with Religion News Service.

“We are deeply saddened by the information coming out of two former residential boarding school sites in Canada. We cannot even begin to imagine the deep sorrow these discoveries are causing in Native communities across North America,” Noguchi said.

On Thursday (June 24), the Cowessess First Nation announced it had found indications of at least 751 unmarked graves near the former Marieval Indian Residential School in Saskatchewan.

That came just weeks after the Tk’emlúps te Secwépemc First Nation had used ground-penetrating radar to confirm the remains of 215 children as young as 3 years old on the grounds of the former Kamloops Indian Residential School in British Columbia. Kamloops was opened by the Catholic Church in 1890 and became the largest school in Canada’s Indian Affairs residential school system, with enrollment peaking at 500 students in the early 1950s, according to the Tk’emlúps te Secwépemc. 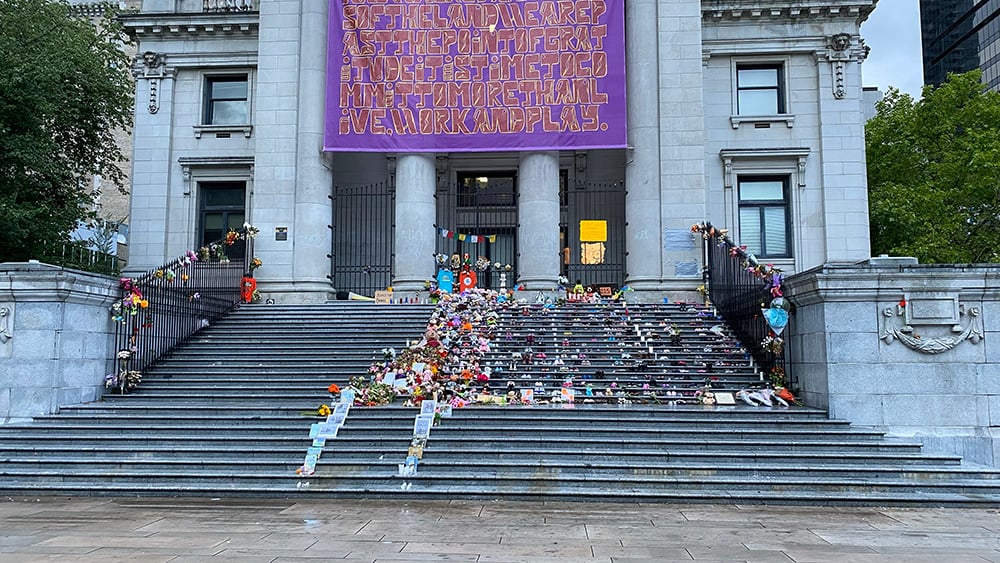 A community memorial on the steps of the Vancouver Art Gallery on June 6, 2021, for the 215 children discovered buried outside Kamloops Indian Residential School. The main memorial consists of 215 pairs of children’s shoes, along with various accessories including teddy bears, books, images and flowers. Photo by Frozemint/Creative Commons

In 2015, Canada’s Truth and Reconciliation Commission released a report on the history and legacy of Canada’s residential school system, which forced assimilation by separating more than 150,000 First Nations, Metis and Inuit children from their families and cultures between 1883 and 1996. The commission documented the deaths of more than 6,000 students as a result of the schools.

Up to 60% of the 139 residential schools in Canada were run by the Catholic Church, according to the commission.

One of the Truth and Reconciliation Commission’s accompanying calls to action asked the pope to come to Canada to apologize to Indigenous peoples there for the church’s role. Canadian Prime Minister Justin Trudeau reiterated that call last week.

The U.S. also operated more than 350 boarding schools, which were often run by churches, according to the National Native American Boarding School Healing Coalition. Secretary of the Interior Deb Haaland, who is Laguna Pueblo and the first Native American to head the department that oversees the Bureau of Indian Affairs, last week announced a Federal Indian Boarding School Initiative to review the legacy of federal boarding school policies.

RELATED: The American church needs to reckon with its legacy in Indigenous boarding schools

Catholic orders administered 84 boarding schools in the U.S., according to America Magazine.

“It is important to understand what might have occurred here in the United States,” Noguchi said.

“By bringing this painful story to light, may it bring some measure of peace to the victims and a heightened awareness so that this disturbing history is never repeated.”