The proposed bill was submitted by Ravi K. Perry, chair of the political science department at Howard University who specializes in Black politics and minority representation, among other topics. It was designed to repeal a section in the AME Book of Discipline that prevents clergy from performing same-sex marriages.

“By simply deleting the section,” Perry wrote in his proposal, “the church would be then permitting local churches and pastors to welcome LGBTQ parishioners into full membership in God’s house … (T)he Holy Scriptures (do not) explicitly forbid same-sex attraction, companionship, love, and marriage — particularly, not as it is practiced in monogamous partnerships and is largely understood as today in the 21st century.”

But the assembled delegates agreed with a motion that the bill could not be debated on the floor because it violated a 2004 decision that stated same-sex marriage was not the will of God.
After the vote, motions to revive the bill on “procedural and ethical issues” were made and, according to the Rev. Renita Marie Green, lead correspondent for the AME’s official publication, the Christian Recorder, the debate “is not over until the General Conference is over.”

“There are people who care about the divine in all humans who are working hard to make sure that the whole person is fully included in the life of our church without penalty to pastors who choose to love others as God has loved us,” said Green.

While the AME Church prohibits clergy from performing same-sex marriages, it does not bar LGBTQ individuals from serving as pastors or otherwise leading the denomination. 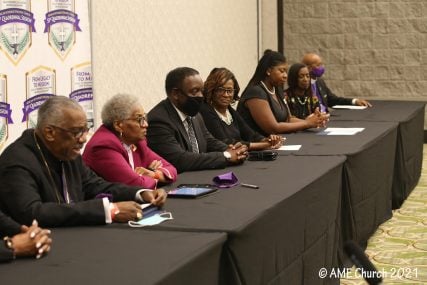 The issue of same-sex marriage is complicated for any denomination to consider, but perhaps especially for the AME Church, whose members in Africa and elsewhere in the developing world often hold more traditional theological views.

Any individual in the AME Church can propose legislation. After it is submitted, the proposed bill is reviewed by a revisions committee that considers whether the measure is legal and necessary, and what its implications may be. The committee then decides whether to recommend the bill to be presented to the General Conference — currently, there are 55 bills in the queue for consideration at the 2021 General Conference.

The bills are then voted on by the delegates and are decided upon based on Robert’s Rules of Order: They need 50% plus one for a bill to pass. According to Green, once a bill is passed, it becomes effective immediately.

Before the second reading, Perry, who is gay, said that passing the bill would be a momentous occasion for the oldest Black denomination in the world.

“We are a church that was founded, because we were marginalized,” he said. “If this were to pass, the vote would symbolize our commitment from the beginning to be a beacon of light for the marginalized. And this particular generation, that’s for LGBTQ people like me.”

News
PHOTO GALLERY: The history and diversity of African American religious rituals
Follow us on Facebook!
Submit your photos to RNS