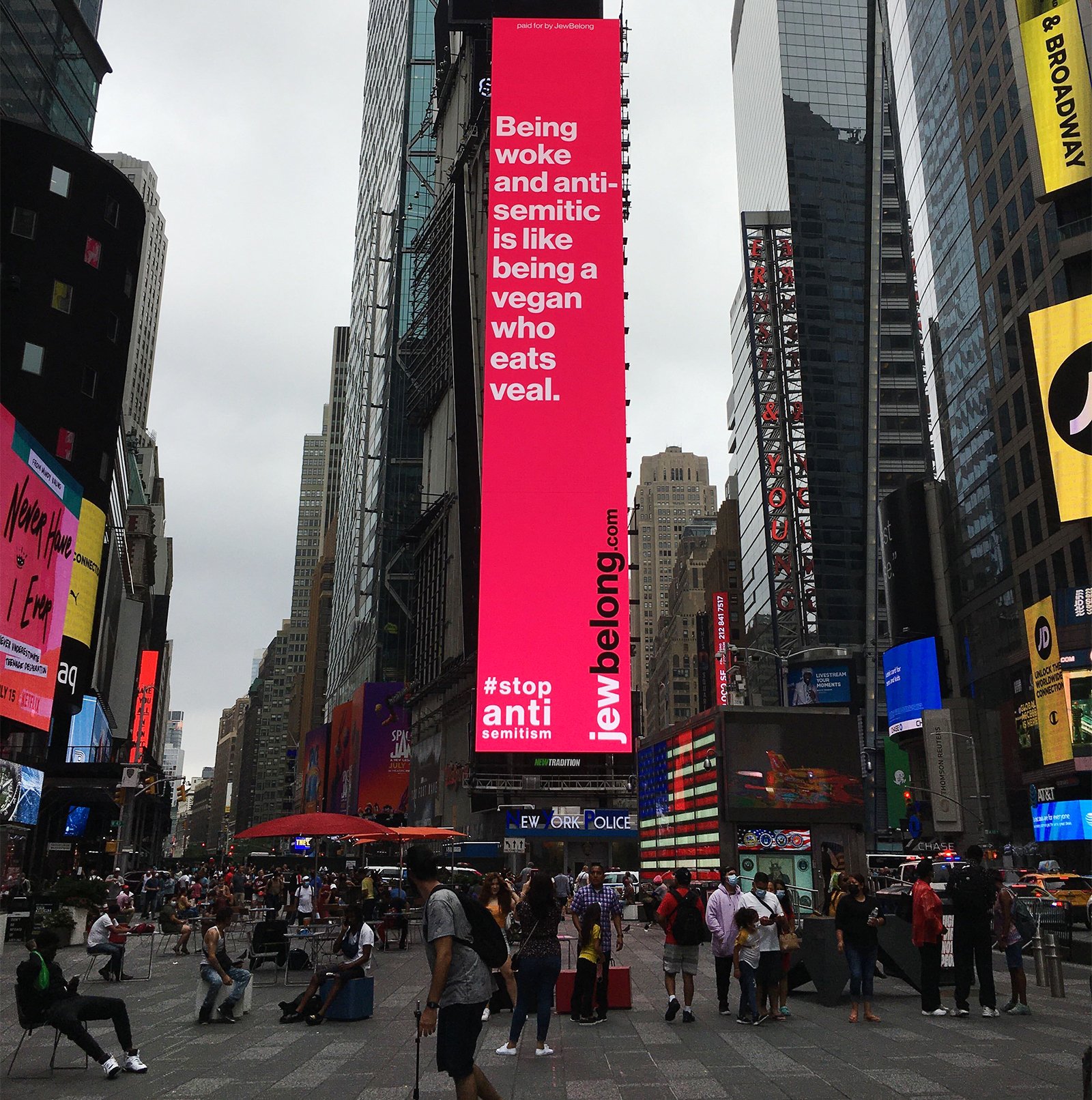 A large billboard displays a message against antisemitism from JewBelong in Times Square, July 12, 2021, in New York City. RNS photo by Renée Roden

“Being woke and antisemitic is like being a vegan who eats veal.”

“Here’s an idea: Let’s ask everyone who’s wondering if antisemitism is real to wear a yarmulke for a week and then report back.”

“We’re just 75 years since the gas chambers. So no, a billboard calling out antisemitism isn’t an overreaction.”

Up for more than a month in New York, the slogans will go up this week on Market Street, a major thoroughfare in Philadelphia; on bus shelters in San Francisco and Washington, D.C.; and on digital kiosks in Miami’s Wynwood neighborhood, as well as in Coral Gables.

They are the brainchild of JewBelong, an 8-year-old group that works to help disengaged Jews feel more a part of the 4,000-year-old faith. (The group’s tagline: “JewBelong: for when you feel you don’t!”) 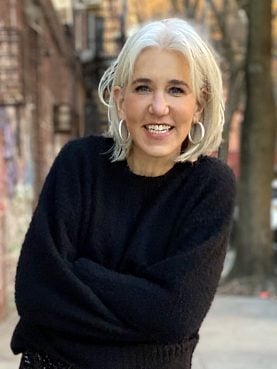 Co-founders Archie Gottesman and Stacy Stuart have made marketing news before: The two were behind provocative billboards that addressed hot-button issues such as gay culture, right-wing politics and abortion rights for Manhattan Mini Storage, which Gottesman’s family owns.

Fighting antisemitism is less controversial. “Antisemitism has been spreading like wildfire,” said Gottesman. “It’s unacceptable not to say something.”

A new survey of 800 American Jewish voters released Tuesday (July 13) by the Jewish Electorate Institute found that 90% are concerned about rising antisemitism. A poll last month of 600 American Jews by the Anti-Defamation League, meanwhile, found that 60% reported witnessing behavior or comments they personally deemed to be antisemitic.

JewBelong is spending close to $400,000 on the ads in the hopes that it might raise consciousness about the need to uproot hatred of Jews.

Gottesman said slogans such as “Black Lives Matter” and “Stop Asian Hate” were the inspiration for the campaign. While the antisemitism slogans are longer and punchier, Gottesman said she hoped they might lead people to snap photos and post them to social media.

Gottesman decided against highway billboards, reasoning that people might not have enough time to read the slogans while going by at 65 mph. Digital kiosks, where people can buy tickets for travel, order food or charge a cellphone, seemed better options.

This is the first time JewBelong has tackled antisemitism. The New York-based organization’s main effort is to offer user-friendly guides to Jewish holidays, rituals and teachings.

A JewBelong billboard calling out antisemitism. Photo courtesy of JewBelong

So far, the New York City response has been mostly positive, Gottesman said. Someone recently contacted JewBelong to say she was driving from three states away to see the ads.

“There’s an undercurrent of Jews in America who feel scared and a little unheard,” Gottesman said. “If JewBelong is giving them some love, then I think we’re doing important work. We really, really stand against hate. It’s important to speak out. It’s a frightening space.”

Benjamin Rivera, a diamond seller in New York City, said he hadn’t noticed the pink ad at Times Square but said he’s heard a lot about growing antisemitism from some of his Jewish clients. “It’s always unfortunate,” said Rivera, 53. “Any interracial things happening like that — it shouldn’t be, whether Jewish or Asian.”