VATICAN CITY (RNS) — Ten Catholic clergymen and laypeople will answer charges of corruption and fraud from Vatican judges on Tuesday (July 27) in preparation for the largest trial ever held in the city-state and the first in memory to put a cardinal in the dock.

But the trial is in many ways as much a test of Pope Francis’ ambitious effort to overhaul the Vatican’s financial and judicial system.

For the first time ever, the Vatican released on Saturday (July 24) the annual report outlining the expenditures of its bureaucracy, known as the Curia, and its real estate and financial operations, known by its Italian acronym, APSA.

It is the latest step in a push begun by Francis’ predecessor, Pope Benedict XVI, to achieve the kind of financial standards expected of other neighboring states.

APSA has long been the most opaque of Vatican departments. Its president, Bishop Nunzio Galantino, called the release of the report “a step forward in the direction of transparency and sharing.”

According to the report, APSA made roughly $25 million in profit in 2020, a significant decrease compared to more than $86 million in earnings in 2019, a drop no doubt caused in part by the lack of tourism to the Vatican during the COVID-19 pandemic.

The Curia suffered a $78 million deficit last year, which the prefect of the Secretariat for the Economy, the Rev. Juan Antonio Guerrero Alves, described as a source of relief: One possible scenario had the deficit nearing $172 million.

“We come from a culture of secrecy, but we have learned that in economic matters transparency protects us more than secrecy,” Guerrero told Vatican News.

The upcoming trial is another showcase for Francis’ planned reforms, but big questions remain about what exactly the judges will find.

According to Vatican court documents reviewed by Religion News Service, the deals that led to five arrests of lay Vatican workers in October 2019 and the indictment of Cardinal Antonio Becciu earlier this year began in 2013, when Enrico Crasso, an investor whose Centurion Global Fund managed part of the Vatican’s portfolio, introduced Becciu to the Swiss-Italian financier Raffaele Mincione. 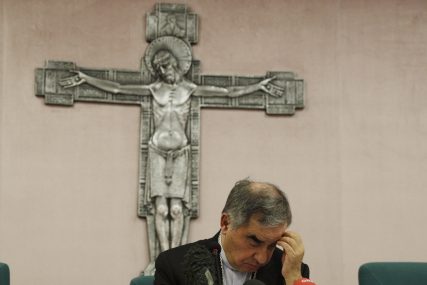 In this Sept. 25, 2020, file photo, Cardinal Angelo Becciu looks down as he meets the media during a news conference in Rome. The Vatican’s criminal tribunal indicted 10 people July 3, 2021, including Becciu, and four companies on charges including extortion, abuse of office and fraud in connection with the secretariat of state’s 350 million-euro investment in a London real estate venture. Becciu helped engineer the initial London investment when he was the chief of staff in the secretariat of state. (AP Photo/Gregorio Borgia, File)

Mincione invited Becciu, who as the pope’s effective chief of staff, or “sustituto,” controlled money then directed by the Secretariat of State, to take a majority stake in a property in London’s Chelsea district. Once a warehouse for Harrods’ department store, the space was intended to be transformed into luxury apartments and sold.

But Vatican prosecutors say the returns on the deal were reduced by a staggering debt on the property of $103 million owed to Deutsche Bank. The project’s planning permit was also tangled up with construction on a sister property in London still owned by Mincione.

What seems to puzzle even Vatican prosecutors is that in 2013, “the Secretariat of State was well aware of discomforting reports that were circulating about Mincione, which should have suggested an approach of the utmost caution,” court documents said.

In 2018 Becciu’s replacement, Archbishop Edgar Pena Parra, seeking to exit the London deal, which was already losing money, turned to Italian broker Gianluigi Torzi, who offered to help the Vatican acquire full control of the property.

In a November 2018 meeting between Torzi, Vatican representatives and Mincione, two contracts were signed: the first negotiating Mincione’s exit via a payment of more than $40 million and the second giving the Vatican control over most of the shares in the property.

But Torzi kept control of 1,000 shares that gave him final say on the company’s management. When the Vatican higher-ups cried fowl, Torzi allegedly asked for $17 million for the voting shares, a move that Vatican prosecutors say constitutes extortion. The Secretariat of State made the payments to Torzi but later issued an unsuccessful request to freeze his assets in the U.K., where he lives.

Vatican court documents show, meanwhile, that Mincione owed a significant amount of money to Torzi and that they had other business ties.

Matthew O’Brien, a U.S. investment manager who has been following the case, questioned why the Secretariat of State would rely on Torzi, a business associate of Mincione with a checkered financial history, to bail them out of the original deal. “It doesn’t make sense to represent a deal with Torzi as a (better) alternative to what has been going on.”

Mincione and Torzi’s alleged plot, as described by Vatican lawyers, was not possible without help from the inside. Instrumental to the deals, the prosecutors say, were Becciu’s personal secretary, Monsignor Mauro Carlino; the Secretariat of State’s point man on financial dealings, Fabrizio Tirabassi; and Enrico Crasso.

With the help of foreign authorities, digital and physical investigations and the interrogation of 59 key players, Vatican prosecutors claim to have reconstructed the complex network of connections inside and outside the Vatican that drained its finances and undermined its credibility. 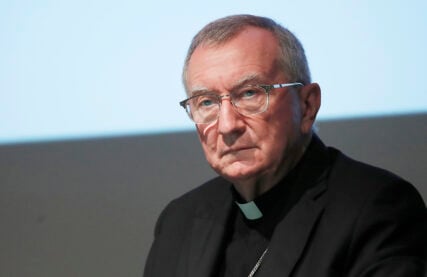 FILE – The Vatican secretary of state Cardinal Pietro Parolin attends at the 150th anniversary of the arrival of Catholic missionaries in China from an Italian religious order meeting, in Milan, Italy, Saturday, Oct. 3, 2020. (AP Photo/Antonio Calanni)

But further questions pertain to the actions of Vatican higher-ups, including Francis’ right-hand man, Secretary of State Cardinal Pietro Parolin, and his deputy, Archbishop Edgar Pena Parra, who were in power as the deal fell apart. Neither has been called to testify before the Vatican judges.

The trial is a test, too, of Francis’ attempt to bolster the Vatican prosecutor’s office, which in the past has shown itself to be outmatched by complex financial machinations. In March, a British judge pronounced its court filings in its move to seize Torzi’s assets riddled with “non-disclosures and misrepresentations.”

Some say the real question coming out of the trial is whether the Vatican profits from having its own financial systems at all.

“There’s no reason why they have to have their own bank, their own sovereign fund,” O’Brien said, citing the queen of England, who employs financial services from private banks, or universities like Notre Dame in the U.S., which has a sizably larger endowment than the Vatican’s.

The trial’s best outcome, said O’Brien, would be for the Vatican to end up with “genuine professional management of the Holy See’s financials going forward.” But, he added, “The only way we are going to get that is if the trial produces enough information that Italy, the U.K. and United States end up prosecuting these figures.”

RELATED: How limiting Latin Mass may become the defining moment for Pope Francis