(RNS) — Jesseca Reddell, 32, left the Pentecostal church she grew up in about 10 years ago. As part of her departure, she began researching the belief system she had left behind.

“When I was in the church, I was very into apologetics,” said Reddell in a phone interview with Religion News Service. As she left the church, she began a sort of reverse apologetics, working to dismantle the system of beliefs she had learned. She was deconstructing. 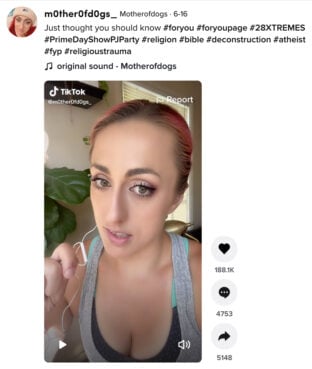 “When I was doing it, I didn’t know it even had a name,” Reddell said.

A watershed moment for her was learning some modern biblical scholars regarded Matthew, Mark, Luke and John as the names of traditions and the lineages of faith communities rather than authors of the four books of the Gospel.

“I never had any inkling of this,” Reddell said. “But the thing is, they teach it in most seminaries. Like, it’s not news.”

Reddell’s younger sisters — she’s the oldest of five girls — introduced her to TikTok. She created a profile, thinking she would make videos of dogs she trained. But her account took off when she created a video about the historicity of the four Gospel writers. She now has more than 70,000 followers.

“I was taken aback. Religion is not something you expect to be popular on social media,” she said.

Reddell has no formal seminary training, but she now spends several hours a week researching biblical scholarship for her videos. Most videos begin with her signature greeting, “Hello, heathens,” she says in a friendly deadpan voice. In bright pink hair, tank top and winged eyeliner, Reddell guides viewers through the research she does each week into topics like hell, the apocalyptic writings of Daniel and Revelation and biblical archeology. “Let’s geek out!” Reddell says, sitting in the front seat of a car in workout clothes, as she begins a short introduction into apocalyptic theology.

Her mission is ultimately simple dissemination.

“A lot of the information that’s known by scholars just isn’t transferred to the public,” Reddell said. “You might be taught in seminary, but you’re not teaching it to your congregation — certainly none of the churches I ever attended. And for most of the Christians in my comments, they were not taught that either.”

Go to next profile: ‘They’re looking for a pastor on this journey’ — @PastorPaul