(RNS) — A 2-year-old girl has been sentenced to death by a British court.

Alta Fixsler was not condemned for any crime she committed, but because British doctors and jurists feel that her best interests will be served by not allowing her to live.

Alta was born prematurely in 2018 and initially showed no signs of life. Doctors, however, resuscitated her and placed her on a ventilator. But Alta had been deprived of oxygen for too long and suffered serious brain and nerve damage. Physicians said the little girl had no hope of leading a normal life.

RELATED: Will those suffering late-stage dementia be the next to be called less than human?

Royal Manchester Children’s Hospital, where Alta is currently being cared for, told Alta’s parents that their daughter should be taken off life support and allowed to die. Doctors, they were told, had decided that Alta, tethered to a ventilator and requiring a feeding tube, was experiencing pain and had no quality of life.

Although a number of pediatric neurologists disagreed with Royal Manchester’s contention that Alta was in pain, the hospital physicians petitioned the British High Court for permission to remove her life support.

In June, the court acceded to the hospital’s request. Justice Alistair MacDonald ruled that, even though Israel was prepared to accept Alta, taking her abroad would expose her to further discomfort “for no medical benefit,” and that moving the child would “expose Alta to further pain and discomfort.”

“It cannot be said to be in Alta’s best interests,” the justice explained, “to be transferred to Israel for life sustaining treatment to continue.”

Alta’s parents are Hasidic Jews and Israeli citizens. (Her father holds American citizenship as well.) They and their son moved to England five years ago to be near the boy’s grandparents. Their Jewish beliefs charge them with maintaining their daughter’s life, no matter its quality.

The Fixslers contend that they have been encouraged by doctors abroad, who said there may be treatment options elsewhere that are not available in England’s socialized health care system. Hospitals not only in Israel but in the U.S. have offered to take Alta into their care; and a medical charity, United Hatzalah Air, has offered to fly her to any destination. Sparing Alta’s life would not cost the U.K.’s National Health Service a farthing.

And so the Fixslers appealed the court decision. But on July 9, the U.K.’s Court of Appeal affirmed the earlier court’s ruling, asserting that the decision to remove Alta from life support was in the girl’s best interests.

In effect, doctor-assisted suicide had evolved into doctor-assisted homicide, as taking Alta off life support comes against a patient’s family’s wishes — and religious beliefs.

Those beliefs stand in stark contrast with some secular contemporary ones. Princeton Professor Peter Singer has famously advocated the active killing of severely disabled babies, and similarly dispatching unconscious and incapacitated elderly people. He has put his beliefs in blunt terms, contending, in his book “Practical Ethics,” that “The life of a newborn is of less value than the life of a pig, a dog or a chimpanzee.”

That approach to life is diametric to what Judaism teaches, that all human life is invaluable and that newborns, including severely compromised children like Alta and the incapacitated and unresponsive elderly, are no less worthy of life and care than any healthy and active person.

Pleas to not disconnect Alta from her respirator have come in from countless citizens in the U.K., the U.S. and Israel. Israel’s former president, Reuven Rivlin, has personally lobbied Prince Charles to intervene in the case.

Here in the U.S., New York Sen. Chuck Schumer secured a visa for Alta and sent a letter to Britain’s ambassador to the U.S., Karen Pierce, demanding that no health decisions be taken against the family’s wishes and that the family be allowed to travel to the U.S.

New Jersey Sens. Cory Booker and Robert Menendez followed up with a letter of their own to Pierce, saying their state’s Phoenix Center for Rehabilitation and Pediatrics was ready and willing to take Alta in.

RELATED: Peter Singer on why we don’t help the global poor and why we should

Ten Republican senators also joined the effort, asking President Joe Biden to try to save Alta’s life. “We are profoundly troubled,” they wrote, “that the child of an American citizen is being treated this way, in a country with whom we have a deep alliance and special relationship. We urge you to advocate to Prime Minister Johnson on behalf of the Fixsler family.”

The Fixslers are currently awaiting a hearing to determine if England’s highest court, its Supreme Court, will hear their case. No date for the hearing has been set.

The case, reduced to its essence, pits religious beliefs against current medical opinion. Such conflicts have occurred many times on these shores, when parents, citing religious beliefs, have refused to allow their children to receive medical treatment. American law does not allow parents to prevent lifesaving treatment of their children.

In those cases, though, the parents are endangering a child’s life.

In the Fixsler case, they are trying to save it.

(Rabbi Avi Shafran is director of public affairs for Agudath Israel of America, a national Orthodox Jewish organization. The views expressed in this commentary do not necessarily reflect those of Religion News Service.) 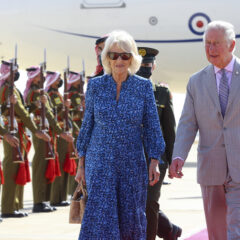