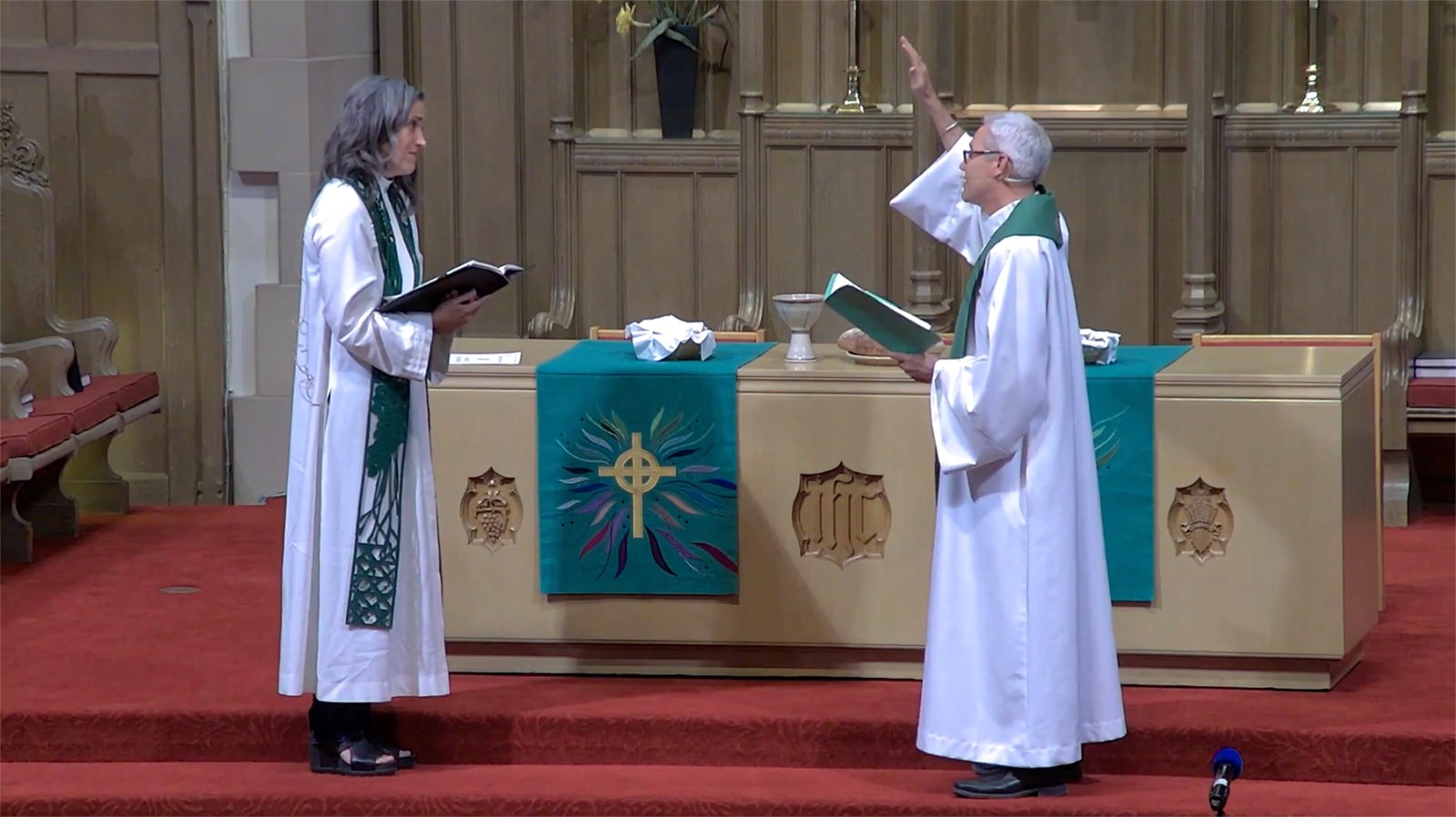 The Rev. Nadia Bolz-Weber, left, is installed as pastor of public witness Aug. 20, 2021, by Bishop Jim Gonia, right, of the Rocky Mountain Synod of the Evangelical Lutheran Church in America, in a service at Montview Boulevard Presbyterian Church in Denver. Video screen grab

(RNS) — The Rev. Nadia Bolz-Weber was installed this weekend as the first pastor of public witness for the largest Lutheran denomination in the United States.

Bolz-Weber, who has often attracted controversy, is perhaps best known for her New York Times bestselling books, including “Shameless: A Sexual Reformation” and “Pastrix: The Cranky, Beautiful Faith of a Sinner & Saint,” the prayer- and profanity-filled memoir of her journey from alcoholic stand-up comic to Lutheran pastor.

She was called to the role of pastor of public witness by the Rocky Mountain Synod of the Evangelical Lutheran Church in America, whose bishop, Jim Gonia, she said has supported her ministry since she first applied to seminary.

Pastor of public witness may be a new position for the ELCA, but other denominations have called clergy to similar public-facing roles. For instance, the predecessor to the Presbyterian Church (U.S.A.) ordained Fred Rogers of “Mister Rogers’ Neighborhood” as an evangelist for television, noted Gonia during Bolz-Weber’s installation service Friday (Aug. 20).

Bolz-Weber laughed at the comparison to the beloved children’s TV host, calling it “counterintuitive.” But, she said, it works.

She’d seen “Won’t You Be My Neighbor?,” the popular 2018 documentary about Rogers and his show, the day after she left the church she founded, House For All Sinners and Saints in Denver, to pursue her current work as a public theologian. The film brought tears to her eyes, she said. It also made her believe maybe it was possible for her to do the new ministry she had upended her life to do.

“The motivation comes from having a pastoral concern and wanting to have a broader reach than a single congregation,” she told Religion News Service.

That work, which is self-funded, won’t look any different from what she has been doing since leaving House for All Sinners and Saints.

“I still pay my health insurance,” she said. “It’s not like I got a new job. I get to still do my job, and have my denomination say, ‘This work is pastoral in nature.’” 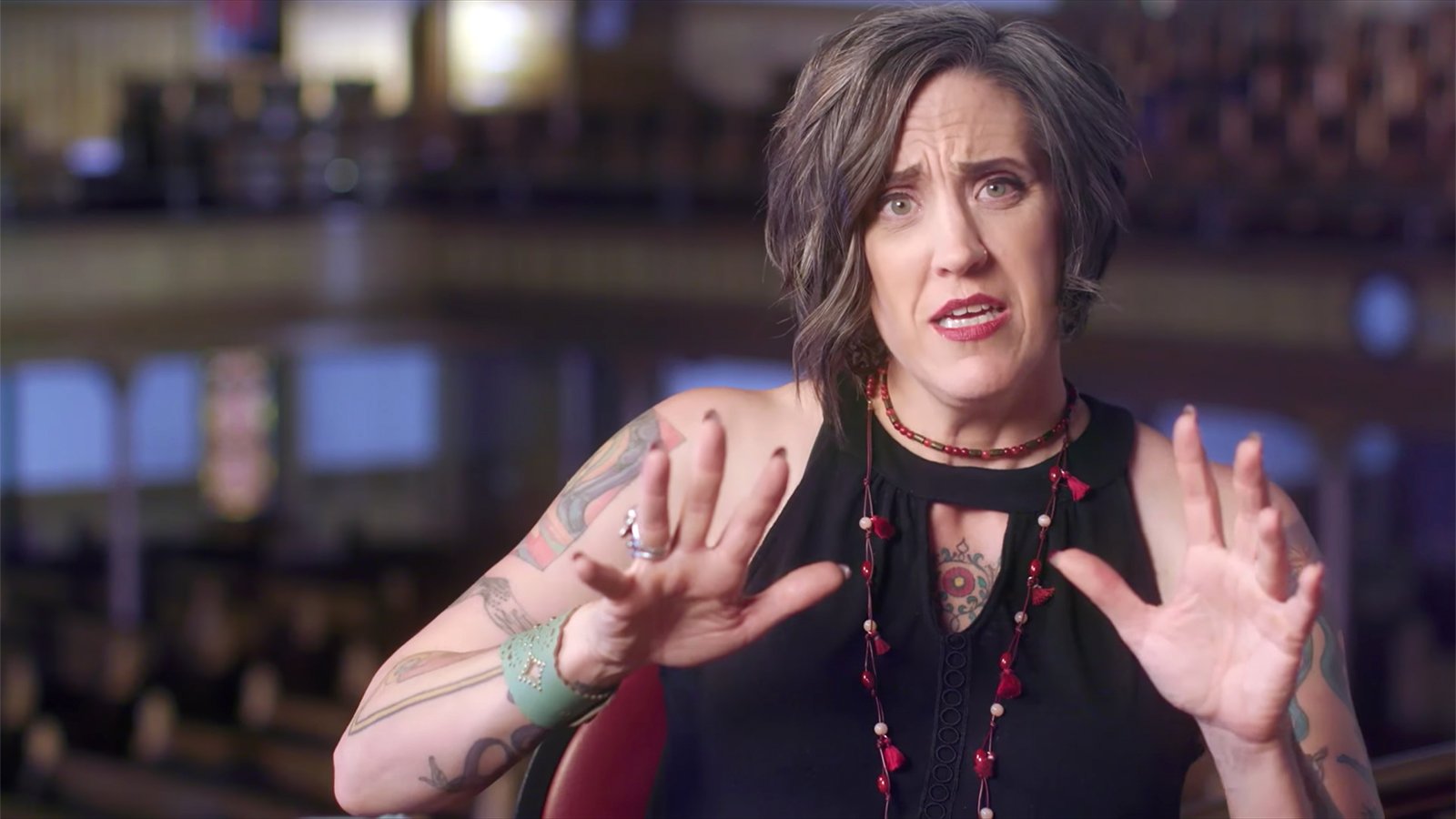 The Rev. Nadia Bolz-Weber discusses forgiveness in a video on her website. Video screen grab

In addition to her books, Bolz-Weber’s public ministry includes hosting a podcast from PRX and The Moth called “The Confessional,” in which people confess their worst moments and the pastor offers a personalized blessing in return. She will also continue speaking, writing an email newsletter called “The Corners” and leading an “experimental gathering of spiritual misfits” online called “The Chapel.”

RELATED: Headed for a larger stage, Nadia Bolz-Weber leaves her ‘house’ in order

Her work often centers on a message of grace and compassion — a message, she said, she herself needs to hear. She’s referred to her style of leadership as “screw it, I’ll go first,” sharing her struggles so others feel comfortable admitting their own.

That message is grounded in Lutheran theology, she said, which is why it’s important for her to remain connected with the ELCA.

“Almost everything I say is just a translation of really basic Lutheran theology, and they’re the ones who gave me that language in the first place,” she said.

Bolz-Weber also offers quarterly messages at several ecumenical ministries in Denver, which issued her call alongside the Rocky Mountain Synod. They are St. John’s Episcopal Cathedral in Denver; New Beginnings, an ELCA worshipping community inside the Denver Women’s Correctional Facility; and Montview Boulevard Presbyterian Church, a congregation in the Presbyterian Church (U.S.A.) in Denver that hosted Friday’s installation service.

“We give thanks for our friend Nadia, who is bringing us together. She has a way of doing that in the world,” the Rev. Clover Reuter Beal of Montview said during the service, which was livestreamed by the church.

In his message, Gonia noted this was Bolz-Weber’s second call to ministry in the ELCA and “a long time in coming to fruition.” The entire conference of bishops of the ELCA had to sign off on the newly created position, which he said he has discussed with the pastor since she left House for All Sinners and Saints.

“Certainly for our Rocky Mountain Synod — one of 65 synods in the ELCA — we’ve never had a calling like this one before, where we are acknowledging that Nadia has a ministry that goes far beyond the walls of any one church,” the bishop told RNS afterward.

That ministry brings a “particular articulation of the gospel” to people who may not otherwise be connected with Christianity, he said. Not so unlike Mister Rogers’ Neighborhood.

RELATED: The surprising success of ‘Won’t You Be My Neighbor?’