(RNS) — This is how the late Leonard Cohen put it:

It was the day they wounded New York.

It was a Tuesday — a bright, sunny, clear day. I was sitting at home that morning in Port Washington, New York — on the north shore of Long Island — preparing my sermons for the High Holy Days. I felt something. Moments later, a friend called me and told me to turn on the television: “We are under attack!” he screamed into the phone.

They were the victims of an ideology that combines resentment of American power, jealousy of American success and anger at American secularism — all the “sins” Leonard Cohen enumerated.

That ideology is still with us.

In the minutes after the planes hit the towers and the reports started to trickle in about the casualties and the expected casualties, I called a staff meeting of my colleagues in the synagogue.

We asked the question none of us could have ever imagined: How would we handle all the requests for funerals we expected to occur over the next week or so?

We had reason to anticipate this. Many of our members worked in downtown Manhattan in financial services. We fully expected there would be many deaths in our congregation.

For reasons that, 20 years later, I still cannot comprehend, the Angel of Death bypassed our congregation.

But, ever since that moment in American history — that moment that changed America forever — I have carried several sacred stories within my soul.

On this 20th anniversary of the Sept. 11 attacks — on this 20th yahrzeit of American innocence — let me share those stories with you.

The first story is a story about conversion to Judaism.

A colleague told me this story.

There was a gentile woman who worked in the World Trade Center.

She had fallen in love with a Jewish man. They were to get married. She decided she wanted to join the Jewish people.

When she told her parents about her decision, they were not happy. Let’s just say they were not exactly lovers of the Jewish faith or people.

Her parents called her in anguish, looking for her.

Finally, she called them back and said: “I’m alright. I skipped work today.”

“Why?” they asked, through audible tears of gratitude.

“I had an appointment with the rabbi who is teaching me for conversion.”

Her parents came around.

It is 20 years later. By now, I assume, this woman’s parents have come to believe Judaism actually saved their daughter’s life.

The second story is about the unclaimed cars at the station.

On Wednesday morning, Sept. 12, I went into the Starbucks next to the Long Island Rail Road station in the adjoining town of Manhasset.

The firm that took the direct hit was Cantor Fitzgerald. It was a heavily Irish-Catholic firm.

The firefighters and the police in New York City had been, traditionally, a very Irish-Catholic group. There were miniature, grim Catholic school reunions in the stairwells of the buildings: Irish-Catholic traders running down; Irish-Catholic first responders running up. Those first responders knew exactly what they were doing and where they were going. Their sacrifices were without measure. I lost a high school classmate that day, Brian Hickey, one of the brave firefighters.

Manhasset is heavily Irish-Catholic — a combination of wealthy and working class. It was one of the towns that suffered disproportionate losses on Sept. 11.

There I was, in the Starbucks in Manhasset, adjacent to the parking lot for the Long Island Rail Road.

I will never forget the baristas — the young girls who worked behind the counter —whispering to each other, in tears.

They were talking about the cars left in the parking lot from the night before.

Those were cars that belonged to commuters who left them there, early on Sept. 11 — and who would never come to claim them.

Those were among the holiest whispers I had ever heard in my life. It might well have been this was the first time those young women had ever dealt with the reality of death, their innocence forever shattered.

The third story: “Rabbi, about my windows …”

No amount of seminary education could have prepared me for the question a congregant asked me in the wake of 9/11.

It was during the break on Yom Kippur.

“Rabbi, I live on the Upper West Side. My windows are covered with the grime that has drifted uptown since …

“I need to clean my windows, but there are ashes of the dead in that dust. It doesn’t seem right to just have the windows cleaned. What do I do?”

Out of somewhere, my answer came out.

“Use a paper towel to wipe the windows clean as much as possible. Then, put the paper towel in an envelope, take it to a Jewish funeral home, and ask them to bury it the next time they do a funeral.”

She nodded and thanked me for the advice — and that is precisely what she did.

There’s a Hasidic saying: “If you want to find a spark, sift through the ashes.”

The question that woman asked me was a spark in the ashes. Such questions remind us religion matters more than we had ever thought.

Religion is about real, get-your-hands-dirty questions — and, sometimes, tentative answers. 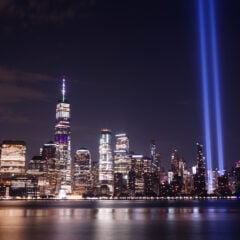 News
‘The story is still unfolding’: 10 Americans on how 9/11 changed their faith lives