(RNS) — The binge-worthy four-part docuseries “LuLaRich” is available for streaming on Amazon Prime, and it’s a doozy.

It chronicles the dizzying rise and fall of LuLaRoe, a multilevel marketing company in California that is now the subject of at least 50 lawsuits and legal actions alleging that it’s a pyramid scheme.

The series walks a fine line with the founders’ Mormon faith. It notes that the husband-and-wife team of DeAnne and Mark Stidham (president and CEO, respectively) are Latter-day Saints and that many in the army of women who sold the company’s colorful leggings and maxi skirts were members of The Church of Jesus Christ of Latter-day Saints too.

It also chronicles the innate weirdness of Mark Stidham spouting passages from the Book of Mormon at a companywide sales event, or comparing his own legal troubles to the prophet Joseph Smith’s persecutions. Other than that, though, Mormon culture is a quiescent subtext, lurking in the background but largely unexplored.

So let’s explore it, because the whole company seems infused by a superficial and selective set of values that arise from Mormon culture in a particular place and time.

DeAnne Startup Brady Stidham (yes, her maiden name really was “Startup”) comes by her Mormon bona fides honestly. While it’s not mentioned in the documentary, she is a great-great-granddaughter of Joseph Smith’s brother Hyrum, who was assassinated alongside the prophet in the Carthage, Illinois, jail.

DeAnne, born in 1959, is a product of a particular kind of postwar U.S. Mormonism that emphasized traditional gender roles and the idea that women’s main job in life is to make men feel awesome. 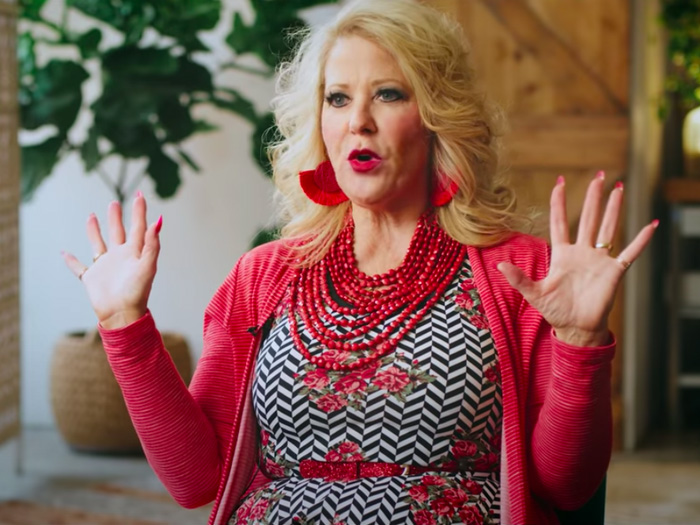 One of the most interesting contradictions explored in the documentary is that LuLaRoe claims to be all about empowering women — its social media feeds are littered with hashtags such as #GirlBoss, #Mompreneur and #BossBabe — while actually bowing down to a distinct brand of anti-feminism that was popular in Mormon circles in the 1960s and 1970s.

DeAnne’s parents literally wrote the book on that. In 1969, they published “The Secret Power of Femininity: The Art of Attracting, Winning, and Keeping the Right Man for You.” The New York Times, in a rather bewildered review three years later, offered several juicy quotes from the text, including this tip for women to practice in advance exactly how they would manipulate men:

Stand before a mirror in the privacy of your room and say to yourself, ‘I am just a helpless woman at the mercy of you big, strong men.’ . . . With this thought in mind, try a pretty pout, stick out your lower lip as much as to say, ‘I thought you liked me.’ Or stamp your feet daintily, saucily, and shake your curls as much as to say, ‘I am furious, but what can a little girl like me do with a big, strong man like you?’

If that phrasing sounds familiar, that may be because it’s crazily similar to the anti-feminist advice in Helen Andelin’s 1965 bestseller “Fascinating Womanhood,” which sold more than 3 million copies.

Andelin, a fellow SoCal Mormon, wrote that wives should manipulate their husbands by acting like petulant children. Instead of arguing with men, she taught, you should “stomp your foot” and “beat your hands on your husband’s chest. Men love this!” Then, after getting his attention, ask him, “How can a great big man like you pick on a poor little helpless girl like me?”

Comparing the excerpts, I would say that DeAnne’s mother, Maurine Startup, also seems to have plagiarized from the same obscure 1920s booklets, taking its examples and text verbatim. And I am guessing that she heard about those booklets because Andelin was (cue the Mormon Bingo drum roll here … ) Maurine’s first cousin, whom she invited to speak to a group of SoCal women shortly before “Fascinating Womanhood” went to press.

Startup went on to lead many Fascinating Womanhood groups for Andelin and was in charge of an anti-ERA movement in California in the early 1970s. Eventually, the two had a falling-out and went their separate ways, but both continued to make a fine living by teaching women the basic principles they had plagiarized from the same 1920s Urtext.

That would all be nothing but a long historical digression but for the fact that those teachings are still alive and well, just dressed up in riotous, au courant leggings for the 21st century. The “LuLaRich” docuseries is full of examples of the way DeAnne recycled these anti-feminist ideas and presented them as gospel to the army of stay-at-home moms the company promised would receive “full-time pay for part-time work.”

Despite its nearly all-female workforce, interviewees say the company placed a strong emphasis on male leadership, pushing husbands to get involved in the business and deferring to them instead of their #mompreneur wives. We see this in painful action when the documentary filmmakers ask DeAnne to explain the company’s original philosophy of women’s empowerment and Mark jumps in before she can speak … because he knows all about women’s empowerment and is happy to mansplain it for us.

DeAnne is a willing, enthusiastic participant in this arrangement. When she’s asked a hardball question about the company’s finances in a deposition, she demurs, pretending not to know how employees were paid in her own company. “You know, that’s something Mark takes care of,” she dissembles. “I don’t know.”

In other words, “I don’t bother my pretty blond head about money!”

This charade is undermined by the extensive footage of DeAnne touting the specific numbers of employees’ compensation and ordering her retailers to go online and sell, sell, sell.

I don’t recall that from “Fascinating Womanhood,” and I think it’s safe to guess it’s not plagiarized from the 1920s booklets either. This appears to be DeAnne’s unique modern contribution to the Andelin/Startup playbook. Um, you go, girl?

Women’s appearance is also a factor. DeAnne instructed LuLaRoe’s sellers to look not just good but fantastic, embracing a hyperfeminine ideal of perpetual thinness and white-lady perfection. When they were overweight, DeAnne allegedly offered to hook them up with a gastric surgeon in Tijuana, Mexico, for weight loss surgery.

That’s not a far cry from “Fascinating Womanhood” telling 1960s women that they would lose their husbands’ attention if they were so much as 10 pounds overweight.

For the record, all this is not what Latter-day Saints teach and believe. Mormon theology teaches the inherent worth of individual people beyond their appearance or how much money they are making. It rejects greed as a core value and teaches people to repent when they have done something wrong — both of which are messages that DeAnne and Mark do not seem to have internalized.

But what happened at LuLaRoe also isn’t unrecognizable to those who are familiar with Mormon culture. This unique brand of retro gender roles has a history within the LDS church in the United States, and that ugliness has for some members superseded the beauty and real freedom of our theology.

7 dating tips for Mormon women, helpfully mansplained for you

Flunking Sainthood
How Mormons are sabotaging marriage and the family
Follow us on Facebook!
Submit your photos to RNS