(RNS) — Faith-based refugee resettlement groups are celebrating the Biden administration’s proposal to admit as many as 125,000 refugees to the United States in the coming year, calling the decision a “return to moral leadership.”

RELATED: Biden pledges to raise refugee ceiling to 125,000 in address to Jesuit group

The news came Monday afternoon (Sept. 20) as the Biden administration submitted its report to Congress setting the refugee ceiling for the new fiscal year, which begins in October.

The proposal fulfills a campaign pledge from President Joe Biden and reverses years of cuts to the U.S. refugee resettlement program by former President Donald Trump.

“Today we celebrate a return to moral leadership and our nation’s commitment to welcome and generosity,” Church World Service Senior Vice President Erol Kekic said Monday in a written statement.

“At long last there is hope for refugees in search of safety, including Afghans who are in imminent danger and thousands of families waiting to be reunited.”

Earlier this year, Biden raised the refugee ceiling — the maximum number of refugees allowed into the country — from 15,000 to 62,500. That number is usually set by the president in consultation with Congress each fall ahead of the new fiscal year.

At the time, the Biden administration called it a steppingstone to reaching 125,000 in his first full fiscal year in office. Biden had pledged that number as a presidential candidate and reiterated it in the days after his election in a speech to Jesuit Refugee Service.

The number is not historically unusual — former President Barack Obama set the refugee ceiling at 110,000 the last year he was in office. And, Church World Service pointed out, the country welcomed more than 207,000 refugees the year after Congress passed the bipartisan Refugee Act of 1980, creating the current U.S. refugee resettlement program.

But it is an about-face from the numbers set by Trump, which were historic lows each year he was in office.

Still, amid a pandemic and the work of rebuilding the U.S. refugee resettlement system after four years of devastating cuts, the U.S. had admitted only 7,637 refugees in 2021 through the end of August. 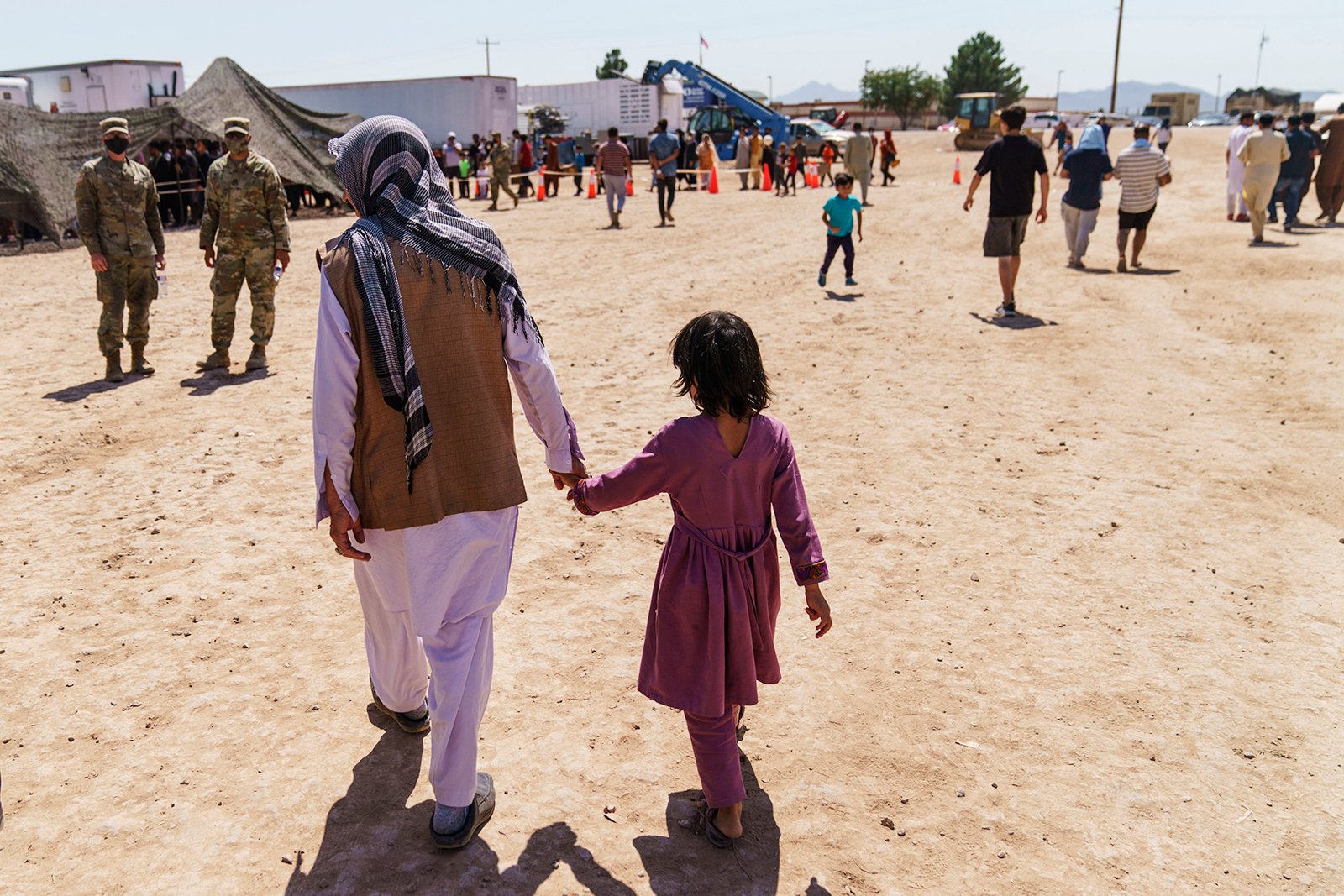 A man walks with a child through the Doña Ana Village of Fort Bliss, where Afghan refugees are being housed, in New Mexico, Sept. 10, 2021. The Biden administration provided the first public look inside the U.S. military base where Afghans airlifted out of Afghanistan are screened, amid questions about how the government is caring for the refugees and vetting them. (AP Photo/David Goldman)

“Raising this cap without dedicating significant resources, personnel, and measures to streamline the process would be largely symbolic,” said Lutheran Immigration and Refugee Service President and CEO Krish O’Mara Vignarajah.

Church World Service and HIAS both noted they had called on the Biden administration to raise the number of refugees allowed into the U.S. this coming year even higher — to 200,000.

Naomi Steinberg, HIAS vice president for policy and advocacy, called raising the refugee ceiling “the right thing to do.”

But, the organization said in its written statement, it’s only a “first step.” It also said the U.S. must provide the same services to Afghans arriving in the country after fleeing the Taliban that refugees receive when they come to the U.S.

Faith-based refugee resettlement agencies have been welcoming Afghan evacuees brought to the U.S. on Special Immigrant Visas, which were created for Afghans who assisted the U.S. government, or on humanitarian parole. They are not counted toward the total number of refugees admitted to the country and do not receive the same resources or path to citizenship that refugees do.

Vignarajah of LIRS stressed the need for more refugee processing officers in the field to conduct the necessary interviews to vet refugees before they are able to come to the U.S. She also suggested remote interviews to allow those interviews to continue during the pandemic — an idea a number of agencies have pushed over the last year and a half.

“It bears repeating that refugees make our nation stronger in innumerable ways, and welcoming them embodies the best of the American spirit,” said Vignarajah.

“We have a unique opportunity to build back the refugee program to meet the unprecedented need — with so many lives on the line, we must seize it.”