(RNS) — During a visit with Jesuits in Slovakia, Pope Francis complained about “a large Catholic television channel that has no hesitation in continually speaking ill of the pope.” Vatican Journalists immediately identified the American media company as EWTN, founded in Alabama in 1981 by the late Mother Angelica.

One of the most vocal critics of the pope is EWTN’s news director and lead anchor, Raymond Arroyo, who sponsors a “papal posse” of critics of Francis. He frequently appears on The Ingraham Angle on the Fox News channel.

“I personally deserve attacks and insults because I am a sinner,” said the pope, “but the church does not deserve them. They are the work of the devil.”

He also complained of “clerics who make nasty comments about me.” He admitted, “I sometimes lose patience, especially when they make judgments without entering into a real dialogue.”

Attacks on popes from clerics and the media are not new. These attacks come from the left or the right depending on who is pope.

RELATED: Should Pope Francis get a third COVID-19 vaccine shot?

John XXIII was attacked by conservatives who blamed him for opening the church to change by calling the Second Vatican Council.

Paul VI was attacked by all sides. Conservatives opposed his attempts to implement the council reforms, while liberals wanted him to move faster. Liberals escalated their attacks after he issued Humanae Vitae, his encyclical banning the use of artificial contraceptives.

Popes John Paul II and Benedict XVI were roundly attacked by liberals, just as Francis is now under attack from conservatives.

It is ironic that the very conservatives who condemned liberals for being cafeteria Catholics — Catholics who picked and chose what they accepted from John Paul and Benedict — are now doing the same with Francis.

Likewise, liberal Catholics who felt free to disagree with John Paul and Benedict are now condemning conservatives for not being loyal to the pope.

Let’s be honest. We are all cafeteria Catholics. The real question is how we avoid a food fight in the cafeteria.

In his “Spiritual Exercises,” St. Ignatius Loyola, the founder of the Jesuits, laid out “Rules for Thinking with the Church.” In that spirit, here are five rules for disagreeing with the pope. This draft is not perfect, but I think the church needs to have a conversation about how we deal with disagreements. 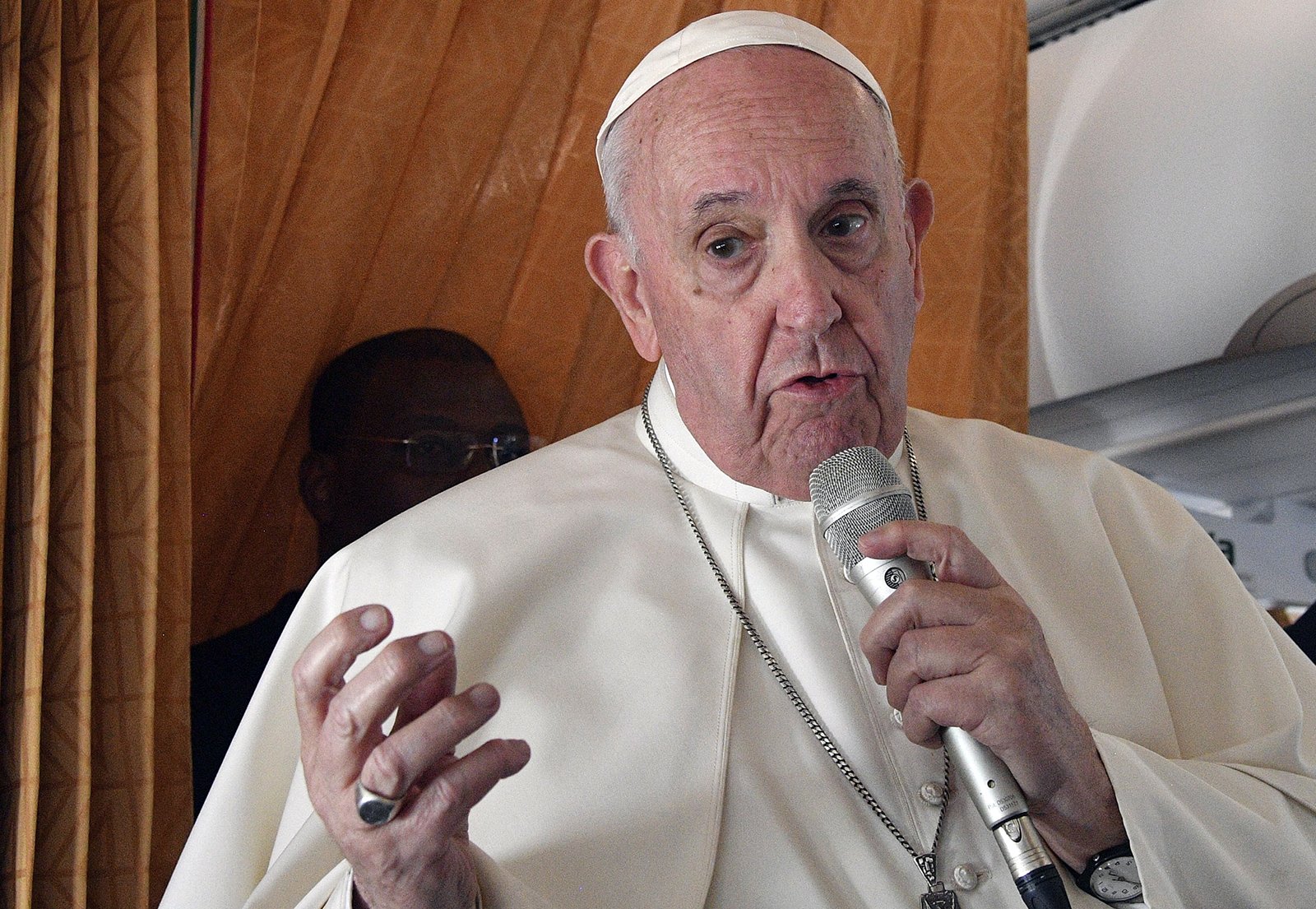 Pope Francis speaks with journalists on board an Alitalia aircraft en route from Bratislava back to Rome on Sept. 15, 2021, after a four-day pilgrimage to Hungary and Slovakia. (Tiziana Fabi, pool photo)

Calling Benedict a Rottweiler, the “German shepherd” or the inquisitor crossed the line, as did ethnic slurs against both him and John Paul. Likewise, referring to Francis as unorthodox or a heretic is unacceptable. Sarcasm and hateful speech have no place in the church. How would we feel if we were the target of such language?

Second, if you disagree with a pope, be sure to emphasize the positive things that he has done.

I had serious disagreements with John Paul and Benedict, but I always praised John Paul for his role in freeing Poland and Eastern Europe, as well as his efforts to improve relations between Catholics and Jews. Both popes supported and developed the social teaching of the church, and under Benedict the church began to become environmentally conscious.

Third, describe the pope’s position accurately and completely; do not create a straw man that can be easily knocked down.

Don’t just say the pope hates women and gays or that he wants to destroy the church. Ideally, you should be able to explain the pope’s position better than he can.

Fourth, never speak or write when you are emotionally upset.

Take a deep breath. Count to 10 or 100. Sit on the draft for 24 hours. Talk it over with a wise person before acting. Be especially careful tweeting.

Fifth, ask yourself, would you speak this way to a parent or someone you love?

If the answer is no, then don’t. The church is a family. Family fights are the worst. Our goal must be to be reconcilers, not dividers.

Our internal church discussions should follow the same rules as our ecumenical dialogue: Disagreements should lead to fuller knowledge and improvements and ultimately consensus.

That way, as the old song goes, “They will know that we are Christians by our love,” rather than knowing we are Catholics by our fights.

But disagreements are part of any family or community. Suppressing them leads to frustration and dysfunctional behavior.

Francis should not be surprised by disagreements. After all, he asked for it. At the 2014 synod on the family, he told the bishops to “speak boldly.”

“A general condition is this,” the pope said. “Speak clearly. Let no one say: ‘This you cannot say.'”

At the same time, speech must be respectful and aimed at building community, not tearing it down. It must be aimed at reconciliation, not division. Disagreements should lead to conversations, not shouting.

Talking to those we disagree with is not about winning and losing. It is about conversation and better understanding.