(RNS) — An often repeated element of Christian nationalism — an ideology with a range of expressions and increasingly vocal supporters — is a belief in America’s divine origins. The United States, proponents insist, is meant to be a “city on a hill” which God intends as a blessing and example for the world.

A new survey finds a majority of Americans who hold to such a view also believe in a “replacement” conspiracy theory holding that immigrants are invading the U.S. in an attempt to replace the country’s current culture.

The survey findings were released in an editorial on Monday (Oct. 11) by Public Religion Research Institute CEO Robert P. Jones. In his post, which was published both on the Substack platform and at Religion News Service, Jones revealed previously unpublished data from a broader survey conducted by PRRI in August — specifically, a question concerning a telling of U.S. history often voiced by Christian nationalists.

Asked whether “God intended America to be a new promised land where European Christians could create a society that could be an example to the rest of the world,” white evangelical Protestants were the only religious group with a majority (52%) who said they completely or mostly agree.

Among those least likely to agree were Jewish Americans (27%), Black Protestants (26%), other non-Christians (15%) and the religiously unaffiliated (11%).

Jones noted the question echoes the Doctrine of Discovery, a theological principle outlined in a series of papal bulls that has been used for centuries to justify the subjugation of Indigenous peoples. 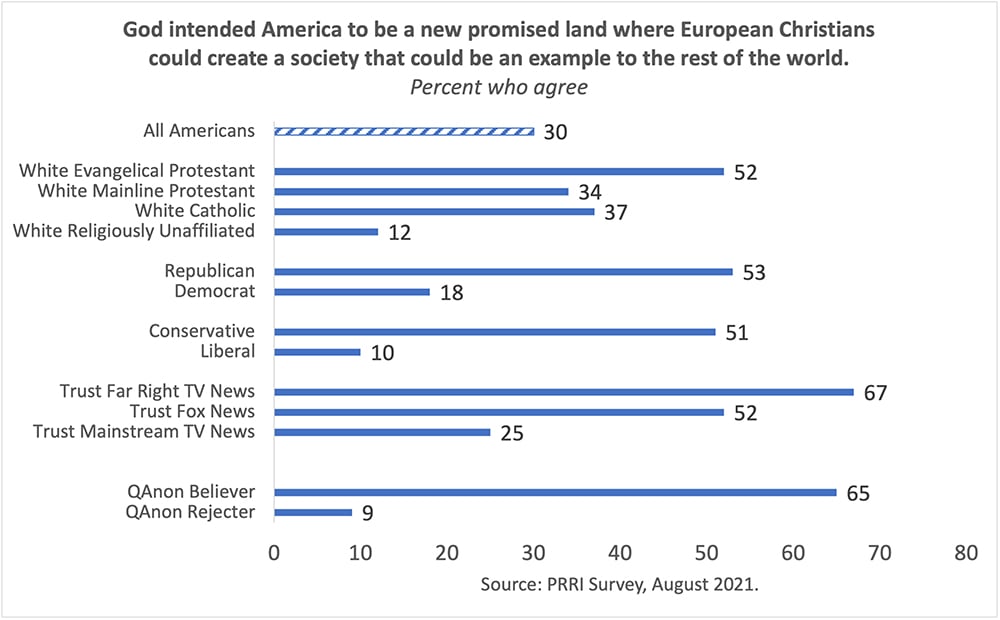 “God intended America to be a new promised land where European Christians could create a society that could be an example to the rest of the world.” Graphic courtesy of PRRI

A chart accompanying the post revealed support for the idea is notably higher among Republicans (53%) than Democrats (18%), and is especially high among those who trust far-right media sources (67%) and those who believe conspiracy theories associated with the QAnon movement (65%).

Jones also pointed to one especially unsettling trend among those who completely or mostly agree that the U.S. was singled out by the divine: most (55%) believe the “replacement theory” idea that immigrants are invading the U.S. and “replacing our cultural and ethnic background.”

The so-called great replacement theory is popular among white nationalists, including racists who chanted slogans linked to the idea during the 2017 clashes in Charlottesville, Virginia. The Anti-Defamation League has also argued men who carried out recent mass shootings in a mosque in Christchurch, New Zealand, a synagogue in Pittsburgh and a Walmart in El Paso, Texas, all appeared to either express sentiment similar to the theory or reference it outright in online manifestos.

Yet the theory is now pushed by more mainstream conservative voices, particularly Fox News host Tucker Carlson. He referenced the theory by name during a September episode of his show and accused the Biden administration of trying to use immigration “to change the racial mix of the country.”

In the PRRI survey, most Americans who trust Fox News (52%) agreed that God intended America to be a new promised land.

The margin of error for the overall survey is +/- 1.86 percentage points.