(RNS) — I was in New York City last week, and I needed to drive out to New Jersey for an appointment.

As I was coming through the Lincoln Tunnel, I started singing to myself:

You woke up this morning,

You got yourself a gun

It is, of course, the theme song from the HBO blockbuster series, “The Sopranos.” I loved “The Sopranos”; I lived for each episode. Three weeks ago, there was an article in the Sunday New York Times magazine. It reminded me of that love, especially the paragraph about the journey through the tunnel:

At the beginning of every episode, the viewer is brought along with Tony as he makes his long journey home, a ride from city to exurb that tells the story of America’s geographical unwinding in miniature. Out of the Lincoln Tunnel and onto the turnpike, Tony passes through the industrial hinterland of New York City, eyeing aging smokestacks and crumbling factories, which loom as large here as the more potent symbols of American life — the Statue of Liberty, the World Trade Center — that flash in and out of view. Next comes Newark, dreary, with its vinyl siding and white-ethnic heritage both fading. From there Tony drives through the suburbs, which grow nicer the farther he gets from the city — the houses tidier, the lot sizes larger — a series of sieves that caught this outflow of humanity, until at last he reaches his home, that perfectly garish palace. North Caldwell, New Jersey. A zone of total atomization, where the swimming club, once a place for families — if not for everyone — became a wallowing ground for a fictional depressed mobster.

Great writing! And, yes, I liked the currently playing HBO Max show, “The Many Saints of Newark,” which is the prequel for “The Sopranos” — unfolding against the backdrop of the 1967 Newark riots — with Michael Gandolfini, the son of the late James Gandolfini, playing the younger version of Tony, and eerily so.

Tony Soprano was a compelling character — a man who commits great evil and knows it and is somehow/somewhat conflicted about it. 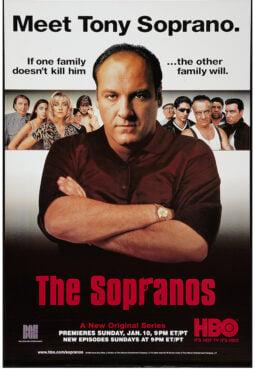 A poster for “The Sopranos.” Image courtesy of HBO

On the one hand, Tony is a cold-blooded killer. On the other hand, he is a loving family man — albeit with his own proclivities.

Recall the episode when he takes his daughter, Meadow, on a college tour. While she is meeting with an admissions officer, he happens to spy a former mobster who is in the federal witness protection program, blithely kills him and then goes to pick up Meadow.

Tony knows how to compartmentalize his life. This is straight out of the work of Robert Jay Lifton. Lifton wondered how Nazi doctors could work at Auschwitz. He noted they suffered from psychic fragmentation — what he called “doubling.”

That is why I loved “The Sopranos.” It was not only about organized crime, about family; it had deeper psychological and spiritual dynamics — an exploration of the divided self.

But, there is also a reason why I am suspicious of my love for “The Sopranos.”

I recently had a conversation with an old friend from high school. She is a proud first-generation Italian American. When the subject of “The Sopranos” came up, she was not happy.

“Please understand what it is like for me to know that every week, millions of Americans are watching a story that repeats all the worst Italian American stereotypes.”

I knew she was correct.

Imagine not “The Sopranos,” but “The Shapiros,” an HBO series about a Jewish family of slum lords and loan sharks. The American Jewish community would not have sat still for one minute.

My friend and I are not the only people who are overly sensitive to the stereotyping of Italian Americans. Consider the front-page article in yesterday’s New York Times — about how the Roman Catholic Church in Sicily has imposed a ban on the naming of godfathers during the baptism ceremony.

The Church believes the practice has lost all spiritual significance — only serving to strengthen families’ financial prospects — and more:

Italian prosecutors have tracked baptisms to map out how underworld bosses spread influence, and mob widows in court have saved their most poisonous spite for “the real Judases” who betray the baptismal bond. It is a transgression most associated with, well, “The Godfather,” especially the baptism scene when Michael Corleone renounces Satan in church as his henchmen whack all of his enemies.

“The Sopranos” is great television. I wanted to say “was,” but as a classic, it lives in the land of the eternal “is.”

But, let us be honest. “The Sopranos” is not good ethnic politics.

I am invoking the rabbinic dictum: “What is hateful to you, do not do to your fellow person.” It is about empathy.

When I see how Jews are sometimes portrayed on the screen, I cringe. I do not think the Adam Sandler film, “Uncut Gems,” about unscrupulous Jews involved in the jewelry business (complete with seder scenes), was “good for the Jews.”

When I see how other minorities are sometimes portrayed on the screen, I should do the same on their behalf.

I will be the first to admit “The Sopranos” — along with other movies about the mob — has not been good for Italians.

It is possible very few of my Italian American friends have noticed or care.