(RNS) — The Parliament of the World’s Religions, a gathering of religious leaders from around the world, concluded its eighth convening Monday (Oct. 18). With a central theme of “Opening Our Hearts to the World: Compassion in Action,” the virtual event’s presenters spoke on interfaith understanding, religious prejudice, gender equality and healing in difficult times.

But amid musical performances and spiritual blessings, the recurring theme of the three-day interfaith event was climate change.

“The twin threats to our future, climate change and biodiversity loss, we’ve also brought on ourselves by the disrespect of the natural world — the absurd idea that there could be unlimited economic development in a world of finite natural resources and the growing human population,” said Jane Goodall during the opening ceremony, which also featured several leaders sharing prayers in their native languages.

The world-renowned primatologist and conservationist pointed out in her speech that more than 70% of the world follows some faith or religious tradition, giving religious leaders the opportunity to play a great role in bringing about change.

RELATED: ‘Religion entered into me’: A talk with Jane Goodall, winner of the 2021 Templeton Prize

The gathering was the first virtual convening in the 128-year history of the event. With a goal of fostering dialogue and cooperation across global religious groups, the Parliament of the World’s Religions was first hosted at the world’s fair in Chicago in 1893 and has often been considered the birthplace of today’s interfaith movement. Since its inception the group has hosted eight convenings, gathering religious leaders from around the world to explore ways they can collectively address global issues.

In 2021, the major global issue that kept bubbling to the surface was the climate crisis and its long-reaching impact. The topic was addressed by a number of speakers across ideological and religious backgrounds.

Pella Thiel, chairperson of End Ecocide Sweden, and Henrik Grape, senior adviser on care for creation, sustainability and climate justice for the World Council of Churches, said in a talk Sunday that they are working on a proposal to make mass damage to nature — or ecocide — a crime against humanity that could be prosecuted by the U.N.’s International Court of Justice.

“It is time now that we make ecocide an international crime,” said Thiel. “And one of the first public figures to support ecocide law was Pope Francis.” 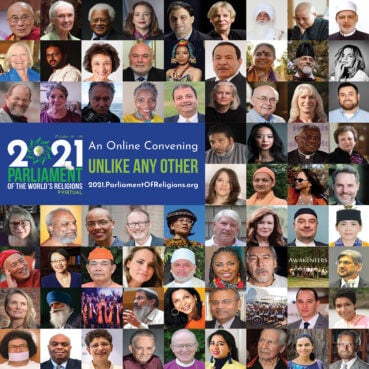 Participants in the 2021 Parliament of the World’s Religions virtual meeting. Courtesy image

Susannah Tuttle, director of the North Carolina Council of Churches’ Eco-Justice program, described the devastation in coastal nations and insisted people of faith must raise the issues of loss, damage and financial aid for those suffering from climate-related disasters.

Experts in Hinduism and Jainism spoke about the positive impact of veganism and vegetarianism on the environment.

“These usually marginalized voices need to be prioritized by intentionally putting them front and center at the solutions table to ensure their voices and wisdom are heard, understood and respected at all levels,” Bear said. “That’s what climate feminism suggests strongly for the 21st century.”

Along with climate issues, the event also featured talks on coping with grief and loss, parenting, the inclusion of LGBTQ communities and Indigenous land acknowledgments. While opportunities for interaction were limited due to the virtual nature of the platform, attendees could take part in networking sessions where they were matched with other members for short conversations.

Arzan Sam Wadia, president of the Federation of Zoroastrian Associations of North America, was glad that the event was held, even as he acknowledged the limitations of a virtual gathering.

“They never anticipated COVID to happen and therefore, they’re doing the best they can in these circumstances. I’m sure that the next one will be in person and we will come out stronger in numbers and in practice,” he told Religion News Service.

What the Parliament of the World Religions does really well, he said, is encourage interfaith engagement. He hopes, though, that future convenings will cover more issues that he felt were left off this time around.

“There are certain topics that I think don’t get touched upon either because they’re too polarizing or they can offend people in one way or the other whether you like it or not,” he said. Specifically, he noted issues of human trafficking, persecution and the immigration crisis, among others.

“All of those have their roots in religion because they are ethnic in a way,” he added. “The problems that arise out of all of those is primarily because people don’t understand the core value of the religion that they are practicing.”