(The Conversation) — For most Americans, Halloween is a fun holiday when homes are decorated with symbols of the supernatural – witches, goblins and spirits – and costumed children go door to door collecting candy.

Halloween traces its roots to Samhain, a harvest holiday celebrated by the ancient Celts. These original inhabitants of the British Isles believed that the veil between the worlds of the living and dead was at its thinnest at this time of year. They left out treats for spirits they believed would be returning to their former homes.

Today, Samhain is one of the eight major holidays in Wicca, a religion partly inspired by the practices of pre-Christian Britain. Followers of Wicca are known as witches, regardless of their gender identity. Samhain, which is celebrated on Oct. 31, marks the Wiccan new year. It is a somber holiday to remember and mourn those who have died but also to celebrate death as part of the natural cycle of life.

As a scholar of contemporary paganism, I am aware that Samhain this year will be particularly poignant for Wiccans who are members or veterans of the U.S. military as they remember the fallen and process the aftermath of the 20-year war in Afghanistan.

Wicca is one of the most popular forms of contemporary paganism, a set of religions whose practices are inspired by pre-Christian religions. In all of these religions – which include Hellenic paganism, druidry and heathenism, among others – both the Earth and the spirits that are believed to reside in animate and inanimate objects are seen as sacred.

Rituals called sabbats are central to Wicca. In each of these rituals a connection is made between the seasonal changes in nature and what is occurring in people’s lives.

During Samhain, participants are asked to reflect on the death in nature and the shortening of daylight that occurs this time of year in the Northern Hemisphere. These images are then invoked in the ritual, in which those present typically form a circle around an altar that holds symbols of the season, such as colorful leaves, pomegranates and cornstalks. The gods and goddesses of the four directions – north, south, east and west – are called on to join the circle.

Normally there is a reading, often quite poetic, that describes the time of year and the changes that are occurring in nature and in the lives of those in the circle. I have attended Samhain rituals in which participants call out names of the dead whom they wish to honor and remember. Sometimes people bring a photo or other object associated with the deceased person.

Samhain is also a time for Wiccans to journey inward, as if they are entering Mother Earth’s “womb,” to reflect on their lives and particularly on areas that need correction or change. They focus on experiences – such as healing physical or emotional wounds, writing a book, or starting a new career – they hope will come to life in the spring. 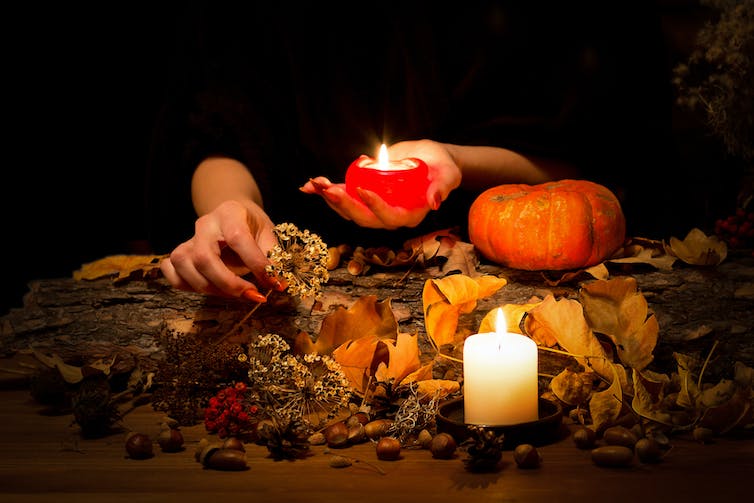 Wicca in the military

Since the late 1970s, Wicca has been included in the military chaplains handbook. After a long court battle, the pentagram – a five-pointed star associated with Wicca – became an accepted symbol for military gravestones in 2007.

The first official pagan circle – which is a gathering of Wiccans and other pagans – to take place on a military base was at Fort Hood, Texas, in 1997. Despite blowback from some Christian churches, the military reiterated its long-standing policy of supporting religious freedom for its members.

Others followed. For example, in North Carolina, Fort Bragg’s open circles – which are Wiccan gatherings open to anyone who wants to participate – celebrated their 20th anniversary on Oct. 2, 2021.

There are no official statistics on how many Wiccans are in the military. However, Circle Sanctuary, a Wisconsin-based nonprofit church and nature preserve, has a partial list of 46 pagan circles it has sponsored and endorsed at military installations throughout the U.S. and abroad, including in Afghanistan.

At Fort Bragg this year, Samhain rituals will focus on healing for military personnel who served in Afghanistan and their families.

The Rev. Christine Ahrens, a volunteer pagan chaplain, is using the seven stages of grief – denial, guilt, bargaining, depression, upward turn, reconstruction and acceptance – as a central element at the open circle.

Ahrens told me earlier this month that she hopes Wiccans who served in Afghanistan and their friends and family members use this time of going inward to process their feelings about the end of the war and the deaths or injuries that they or their loved ones sustained.

Fort Bragg deployed tens of thousands of troops to Afghanistan. Service members and their families on the base have reported feeling anger and disappointment in the wake of the U.S. exit. Ahrens hopes the circle will begin the process of coming to acceptance or internal peace.

Samhain rituals will occur on the night of Oct. 31 on military bases and college campuses, in people’s homes and at other gatherings across the country. As many Americans mourn personal losses and the continuing restrictions of the COVID-19 pandemic, I believe everyone can benefit from spending time this Halloween not only handing out candy but contemplating the seeds of change they wish to plant for the spring.

(Helen A. Berger, Affliate Scholar at the Women’s Studies Research Center, Brandeis University. The views expressed in this commentary do not necessarily reflect those of Religion News Service.) 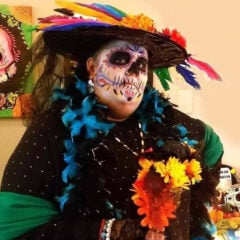 News
The unlikely story of America’s highest ranking Muslim soldier and TikTok favorite
Follow us on Facebook!
Submit your photos to RNS