(RNS) — Like all the good movies in its genre, Halaloween, the Muslim horror film festival, is back with a sequel — and this year, it’s free to stream online.

RELATED: In ‘Midnight Mass,’ there is ungodly horror and there are puritanical Christians

The film festival, hosted by the Global Islamic Studies Center at the University of Michigan, got its start in 2019 when the university’s chair of Middle East studies, Karla Mallette, then-director of the GISC, wondered if the horror genre even existed in the Muslim world. Are filmmakers in predominantly Muslim countries making horror films? What do Muslims even think about horror films?

As it turns out, the genre does exist, and its films are as varied as the cultures that produce them, according to Aliyah Khan, who now directs the GISC.

There are Turkish slasher movies and Iranian vampire films. There are movies about jinn possession from Indonesia and Malaysia and movies dealing with the supernatural from Morocco.

There aren’t many zombie movies — although festival organizers found one from Malaysia this year — perhaps because American zombie films grow out of perceptions of Vodou, said Khan, and ideas about “the living dead and the undead don’t strike Muslims as particularly Muslim or Islamic.”

“It’s really interesting just to think about what each part of the world thinks is important or thinks qualifies as horror,” she said. 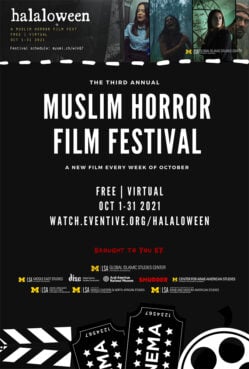 Image courtesy of University of Michigan

The festival packed out the Michigan Theater in Ann Arbor its first year, according to the GISC director.

This month, after a yearlong hiatus through the height of the COVID-19 pandemic, Halaloween is back, co-sponsored not only by a number of departments at the University of Michigan, but also by the Arab American National Museum in Dearborn, Michigan, and horror streaming platform Shudder.

The festival features a new movie available to stream online every Friday — a total of five movies through the month of October. Each comes from a predominantly Muslim country, is made by a Muslim director or is about Muslim themes or set in Muslim societies. And religion appears in various ways, Khan said.

The films aren’t all super scary or gory — there are films for varying comfort levels, and the festival has a Halaloween horror scale, indicating the movie’s scare factor.

Last week’s film, “Kandisha,” was an “unsettling and moody, slow burn revenge drama” made in Morocco in 2008 that rated a 1 out of 5 on Halaloween’s horror rating scale, according to its description on the University of Michigan event calendar.

The festival will wrap up with Indonesia’s 2019 film “Impetigore” and a live panel discussion on Oct. 28 about Muslim horror and the use of Islam and the Quran in film. Panelists will also discuss how, around the world, what constitutes horror varies from culture to culture. It’s not just that the movies are fun or that college students love horror films, Khan said.

The films also offer a glimpse into a number of social, religious and cultural issues facing Muslim societies all over the world. Non-Muslims get a window into the breadth of Muslim experience, and Muslims get to see what Islam and Muslim life look like outside of the United States, according to the GISC director.

And, she said, “like all horror movies, they’re all about how, no matter how scary and bloody and horrible supernatural or otherworldly things are, the worst things that can happen to you are what your fellow man is doing to you.”