(RNS) — Religious rituals are sensory encounters. The smell of candles, incense, the taste of wine at Communion or prasad, the blessed food at Hindu worship practices: Each is aimed at involving the whole body in the spiritual experience.

A question for our pandemic times: Where do online rituals fit into this sensory realm? What would be the appeal?

Well, like anything we consume, it’s about convenience, accessibility and cost. (And, during the COVID-19 pandemic, safety.)

Long before worship went remote because of COVID-19, Hindus have used online portals to purchase rituals and pujas to be performed in their names. Websites providing this service have proliferated since the late 1990s. While members of the Hindu diaspora are accustomed to paying priests to perform rites in family temples or other favorable sacred sites they can no longer frequent, most online rituals are commissioned by devotees located in India.

The earliest remote puja website was saranam.com, a catchall Hindu ritual provider that bills itself as “the world’s first and most trusted Hindu puja service.” Worshippers can purchase pujas for health, wealth, marriage and children, as well as rituals for various deities.

But today there are hundreds of similar sites, all offering subscriptions, group rates and live and recorded options — as one might expect from any product website — with some sites dedicated to furnishing rites in designated temples, connecting various Hindu communities with specific sacred spaces and deities. 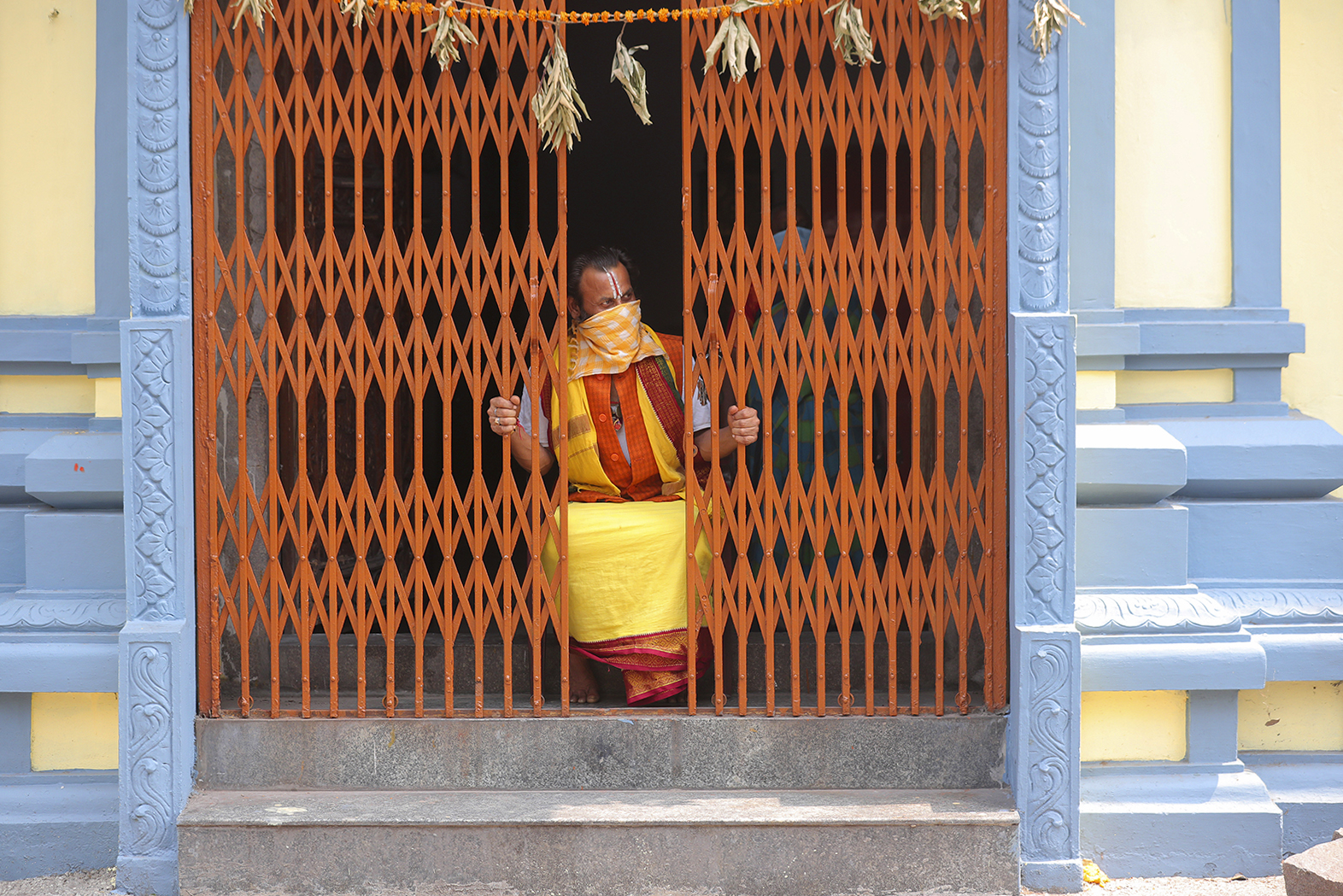 A Hindu priest looks out from a temple during lockdown to prevent the spread of new coronavirus in Hyderabad, India, on April 14, 2020. (AP Photo/Mahesh Kumar A.)

As COVID-19 necessitated closing temples in India to devotees, Hindu priests insisted on continuing to perform rituals as a vital spiritual weapon in the fight against the disease. Meanwhile, the digital puja industry responded by recasting what we call a sacred space.

Early in the pandemic, some temples began webcasting rituals to remain connected with devotees — and for a while it seemed that temple closures would be an unexpected boost for online ritual sales. But as more temples closed to stem infection rates during India’s deadly second wave of COVID-19 in April 2021, many Hindu ritual websites lost access to the temples where customers were promised their rituals would be performed.

There was another problem as well: Hindu rituals traditionally rely on the power of sacred spaces for efficacy, as well as the recitation of the appropriate mantras by trained priests. Though a common practice, a puja performed on one’s behalf has always been understood to be less powerful and less authoritative.

The answer was to transform rituals to meet the needs of the moment: The pandemic has led to a boom in innovative digital ritual applications such as Parampara.app, which offers tailor-made rituals that can convert any space into a sacred space — a kind of DIY ritual purveyor. Its video-aided services and reference guide mean “one can perform the ritual at any convenient time” or place with proper pronunciation of mantras.

Another application focused on virtualizing the sacred, VR Devotee, was launched by Kalpnik Technologies in 2017. Devotees use a virtual reality headset and a smartphone to access an immersive experience of live and recorded temple rituals.

The question is whether such innovations are authoritative. Before VR Devotee founders Apul Nahata, John Kuruvilla and Ashwani Garg launched their app, they met with priests at local temples in Andhra Pradesh, India, to ask if such an experience would be acceptable or even possible. Though the response was largely favorable, there were concerns: What would happen to donations if temples moved into the virtual space? Who would pay for the access — users or temples? Eventually, they settled on a model in which users would pay to access rituals at 150 participating temples. A donation button on the app ensured temples would continue to receive financial support from devotees.

Garg noted that their platform allows users to make virtual offerings of flowers and incense and thus gain a more participatory experience through the VR headset and controls. During the pandemic, VR Devotee has seen its membership rolls grow with users willing to pay for additional services such as personalized VR experiences geared toward specific temples or pujas.

As with so many technological innovations, we haven’t yet grasped the full implications for Hinduism. While these apps revolutionize the nature of sacred space and what constitutes an authoritative experience, they also create a market-based Hinduism that centers the most popular and bestselling practices, while allowing niche deities and ritual traditions to languish.

The market flattens the depth of Hindu religious diversity and puts decisions about authority into the hands of the companies, further marginalizing nonmajoritarian devotional communities.

Long after COVID-19 constrictions have disappeared, digital applications like Parampara and VR Devotee will be pushing at the boundaries of how a ritual is conducted, where it is performed and what constitutes an authentic experience.

Intersections of capitalism and spirituality will always challenge how we access and experience the sacred. The financial stakes are not negligible: The religion and spirituality industry in India was estimated to be worth $44 billion as of 2020, with half of it consumed by Hindus. But the spiritual stakes may be greater.

(Dheepa Sundaram is an assistant professor of religious studies at the University of Denver who writes about digital culture, yoga, nationalism and religion. The views expressed in this commentary do not necessarily reflect those of Religion News Service.)