(RNS) — It is extraordinary today to imagine that it once seemed extraordinary for American cardinals to attack a fellow cardinal publicly. In August of 1996, after Chicago’s Cardinal Joseph Bernardin announced his Catholic Common Ground Initiative, a call for dialogue among the American Catholic Church’s increasingly fractious believers, five cardinals in major American cities released statements expressing their grave doubts.

It was extraordinary then. But we have come a long way.

Bernardin would succumb to cancer three months later on Nov. 14, an anniversary we at the Bernardin Center and others across Bernardin’s former archdiocese are observing 25 years later. Those events of his last days deserve some attention now.

In Bernardin, Catholics had a leader who anticipated the style and ministry of Pope Francis in his openness to dialogue and his efforts to engage the world in constructive conversations. But Bernardin’s final years also anticipated the sort of opposition Francis has faced, especially among American Catholics.

The seeds of our divisions, as Catholics and Americans, were being watered in 1996. As those seeds have blossomed and propagated in 2021, we can look back on Bernardin to understand what has happened and how things might be different.

Bernardin was the Roman Catholic archbishop of Chicago from 1982 until his death, but his importance stretched far beyond Chicago. No bishop in the U.S. could be associated more with the church’s efforts after Vatican II to engage and embrace the modern world as St. John XXIII had hoped when he called the council. Bernardin once wrote that his entire ministry had “taken place in (the Second Vatican Council’s) shadow.”

Yet Bernardin’s impact was not restricted to the Catholic Church. In 1996, John Rawls — a liberal philosopher committed to removing religion from public discourse — acknowledged that the consistent ethic of life advocated by Bernardin “is clearly cast in some form of public reason.” No accomplishment better illustrates Bernardin’s ability to make arguments for Catholic moral positions in terms accessible to nonbelievers, or his commitment to bring Catholicism to the world.

The Catholic Common Ground Initiative was Bernardin’s final and most substantial effort to promote dialogue in an increasingly divided Catholic Church. Beginning in 1992, Bernardin had grown concerned about how divisions over political issues and the implementation of Vatican II were beginning to disturb parish life. With Monsignor Philip Murnion, he began working quietly to gather influential Catholic bishops and laypeople who were committed to dialogue and church unity despite their disagreements.

The initiative challenged American Catholics to honestly discuss their views on the role of women in the church, human sexuality and how the church is governed. 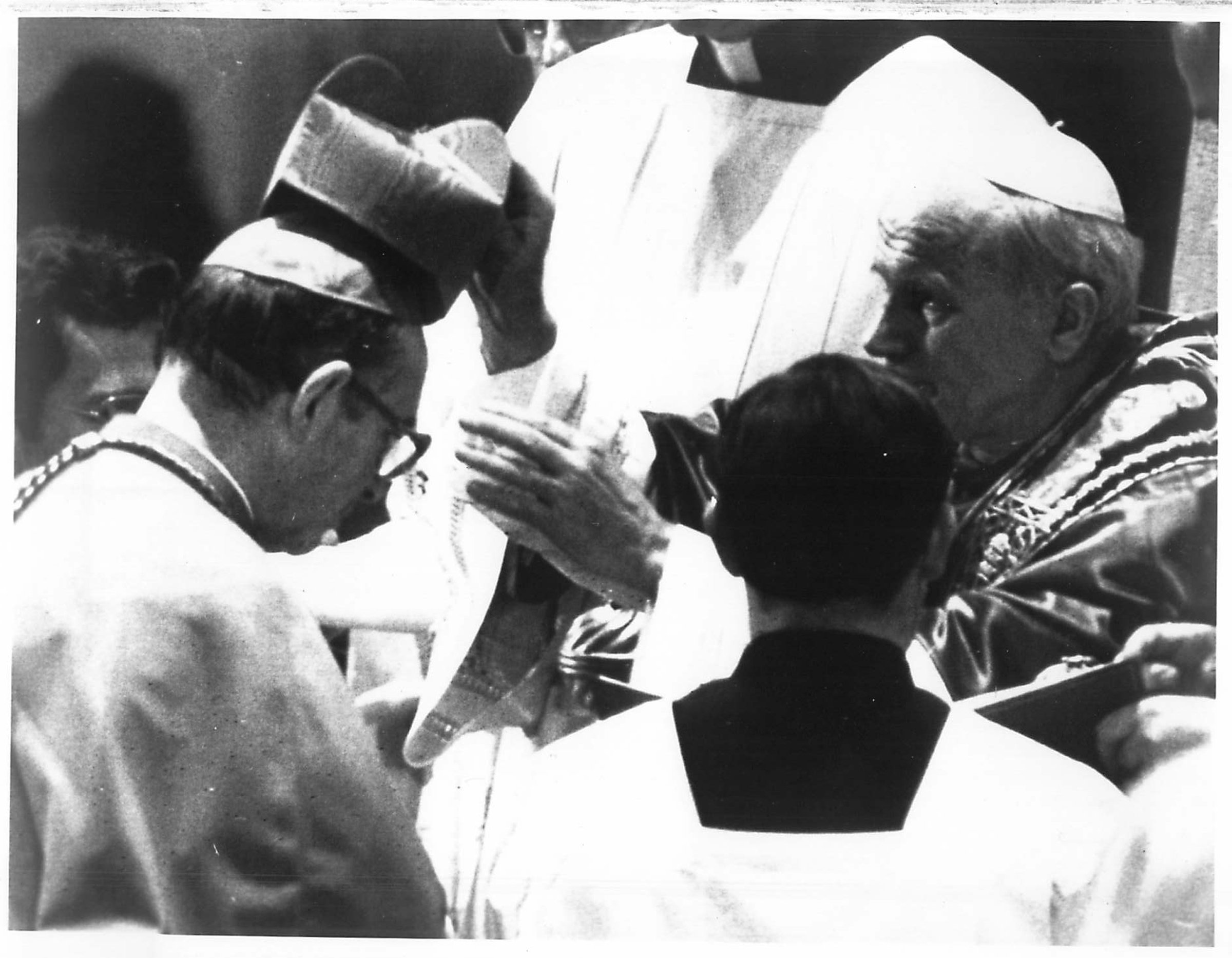 St. John Paul II places a red biretta on the head of Archbishop Joseph L. Bernardin of Chicago as he was elevated to cardinal during a Feb. 2, 1983, consistory at the Vatican. RNS archive photo

Bernardin hoped that such a conversation would bear witness to how Catholics with very different opinions can be in dialogue with fellow believers in the same gospel. It would be a model for parishes, dioceses and Catholic organizations. The Catholic Common Ground Initiative still is a program of the Bernardin Center today.

When Bernardin announced Common Ground shortly before his death, he surely hoped to be leaving a gift to guide the church during a difficult period. But Cardinals Anthony Bevilacqua (Philadelphia), James Hickey (Washington), Bernard Law (Boston), John O’Connor (New York) and Adam Maida (Detroit) came out against Common Ground. Law captured the flavor of the criticisms when he said, “Dialogue as a way to mediate between the truth and dissent is mutual deception.”

The New York Times called the attacks on the initiative “unusual.” That was an understatement. Nothing like it had ever happened before.

Bishops are meant to work for collegiality and unity (at least in public) for the good of the church. A consummate churchman, Bernardin had circulated his announcement among those cardinals for their comments before its public release so they would not be surprised when the announcement was made. The cardinals offered no comments and made no objection — until their press releases attacking the initiative after the announcement. Together, those five cardinals closed the door on dialogue. The church and the world have reaped the consequences.

Today, when Francis calls for dialogue about married priests in the Amazon, or Communion for divorced and remarried Catholics, or equal rights to civil marriage for LGBTQ+ people, he meets the same opposition Bernardin’s call for dialogue met. Dialogue seems to many Catholics to be a capitulation or surrender, and too many Catholics today are so sure about this that they feel entitled to say the pope is wrong.

This vision, and these Catholics, have been ascendant in the 25 years since Bernardin died. That trend has had an impact on the Catholic Church, of course, but there also have been consequences outside the church.

Catholics have a profound influence on life in the United States. Generally, we say there are 70 million Catholics in the U.S. (though that number almost certainly does not reflect the exodus since the Cardinal Theodore McCarrick revelations and the pandemic). For the past 25 years, that sizable share of the population has learned to be suspicious of dialogue, and in turn Catholics’ polarization has driven broader polarization in the abortion debate, but also in the Obamacare debate, in the vaccination debate and in other ways.

After 25 years of dividing against each other, American Catholics seem unable to see the different way Francis has tried to show us: the way of dialogue. Acrimony and division have become our tools, our vocabulary and our habit, and we seem unable to find a different way. 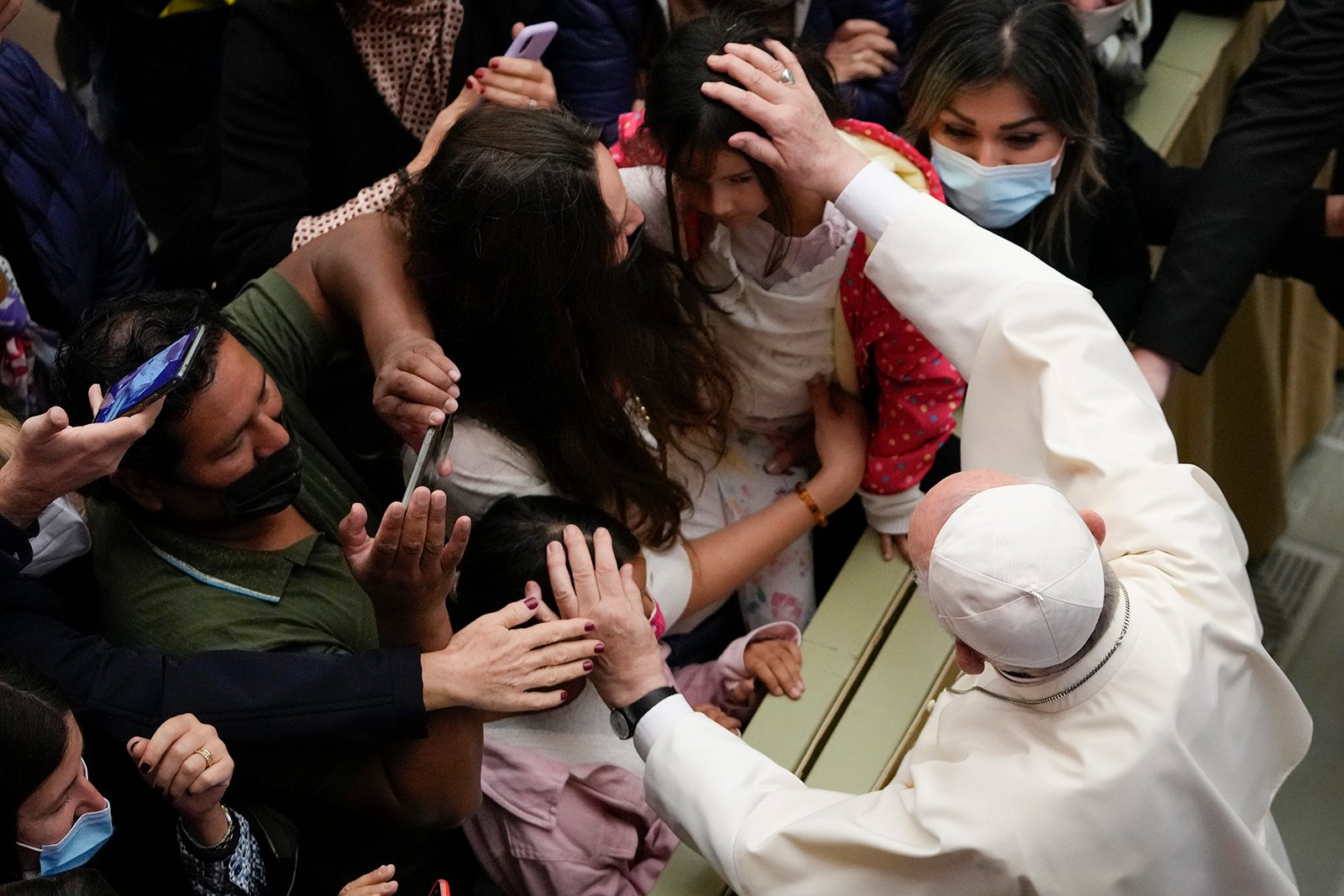 Pope Francis greets people at the end of his weekly general audience in the Pope Paul VI Hall at the Vatican, Oct. 20, 2021. (AP Photo/Alessandra Tarantino)

We all need to do better, but Catholics especially have a responsibility both because of the role we have played in division and because of what Catholics believe. On this 25th anniversary of Bernardin’s death, we can look back to him for guidance as we try to find a way out of the hostility toward dialogue we have been trapped in since the 1990s.

People like to say that Bernardin was an apostle of reconciliation or dialogue or peacemaking. That’s true. But as director of the Bernardin Center and as Bernardin’s biographer, I prefer to say he was a witness to the hope that such things are possible.

Hope has to come first. From hope, we can begin and pursue the paths of peace that seem impossible. Hope is our license to believe in the impossible.

After he launched the initiative, Bernardin was asked why he had chosen to try to mount such an effort when he had so little time left to live. He reminded us that “a dying person does not have time for the peripheral, the accidental,” and said, “It is wrong to waste the precious gift of time given to us, as God’s chosen servants, on acrimony and division.”

Bernardin wanted his dying to bear witness powerfully to the senselessness of our angry divisions. He offered his death as an encouragement to seek dialogue and peace. He also quoted from the Second Vatican Council: “Let there be unity in what is necessary, freedom in what is doubtful, and charity in everything.”

Bernardin knew those would be among his last public words. Now, many years later, it is for all of us now to keep alive the hope they represent. The way of dialogue can heal divisions among Catholics, but dialogue also is a powerful message Catholics can bear to the rest of our angry, wounded world.

Francis understands. In his most recent encyclical about social friendship, he wrote, “I invite everyone to renewed hope.” Even now, that same hope that we can be agents of the reconciliation and peace Bernardin invited us to still is possible.

(Steven P. Millies is professor of public theology and director of the Bernardin Center at Catholic Theological Union. The views expressed in this commentary do not necessarily reflect those of Religion News Service.)